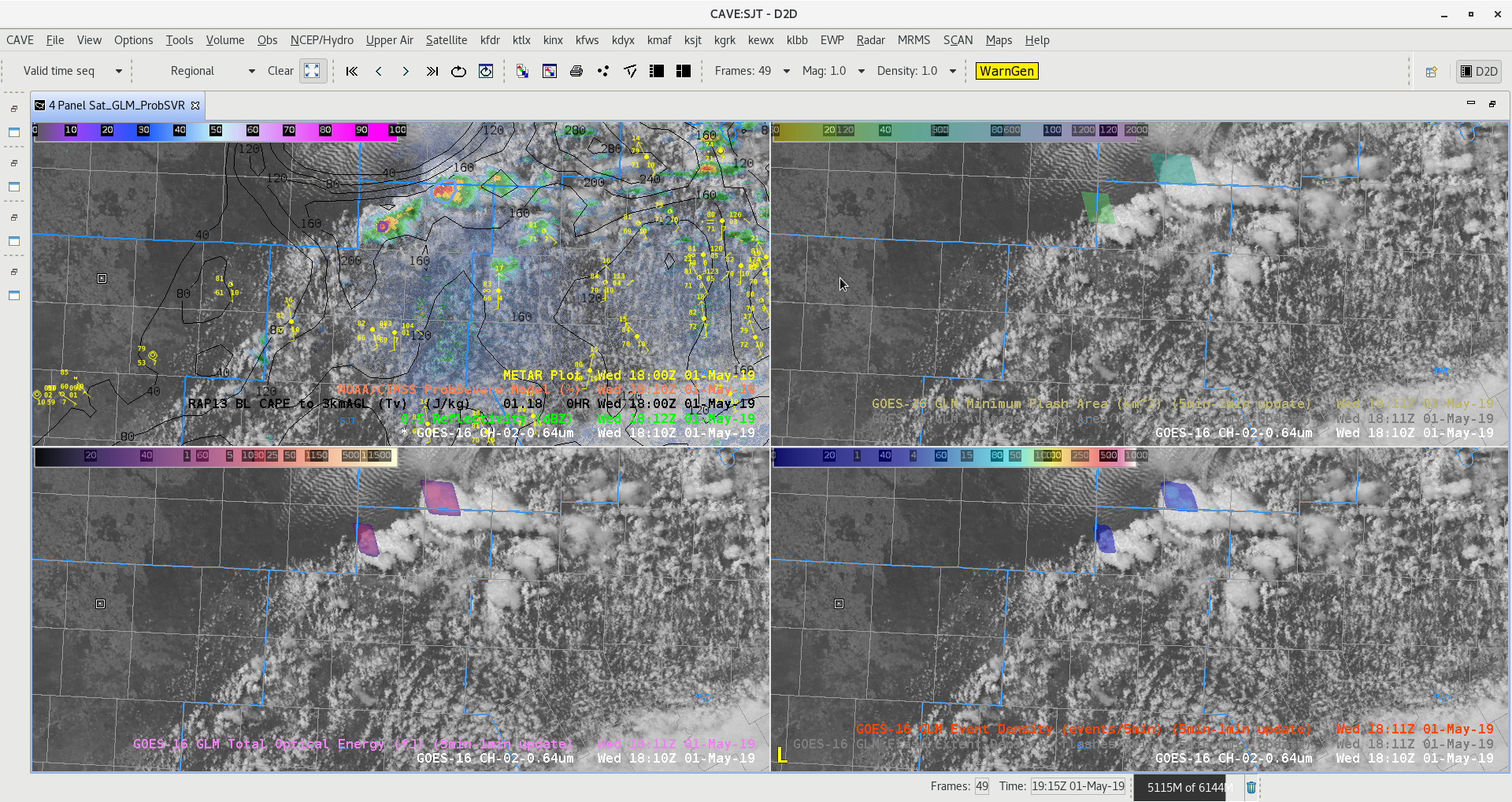 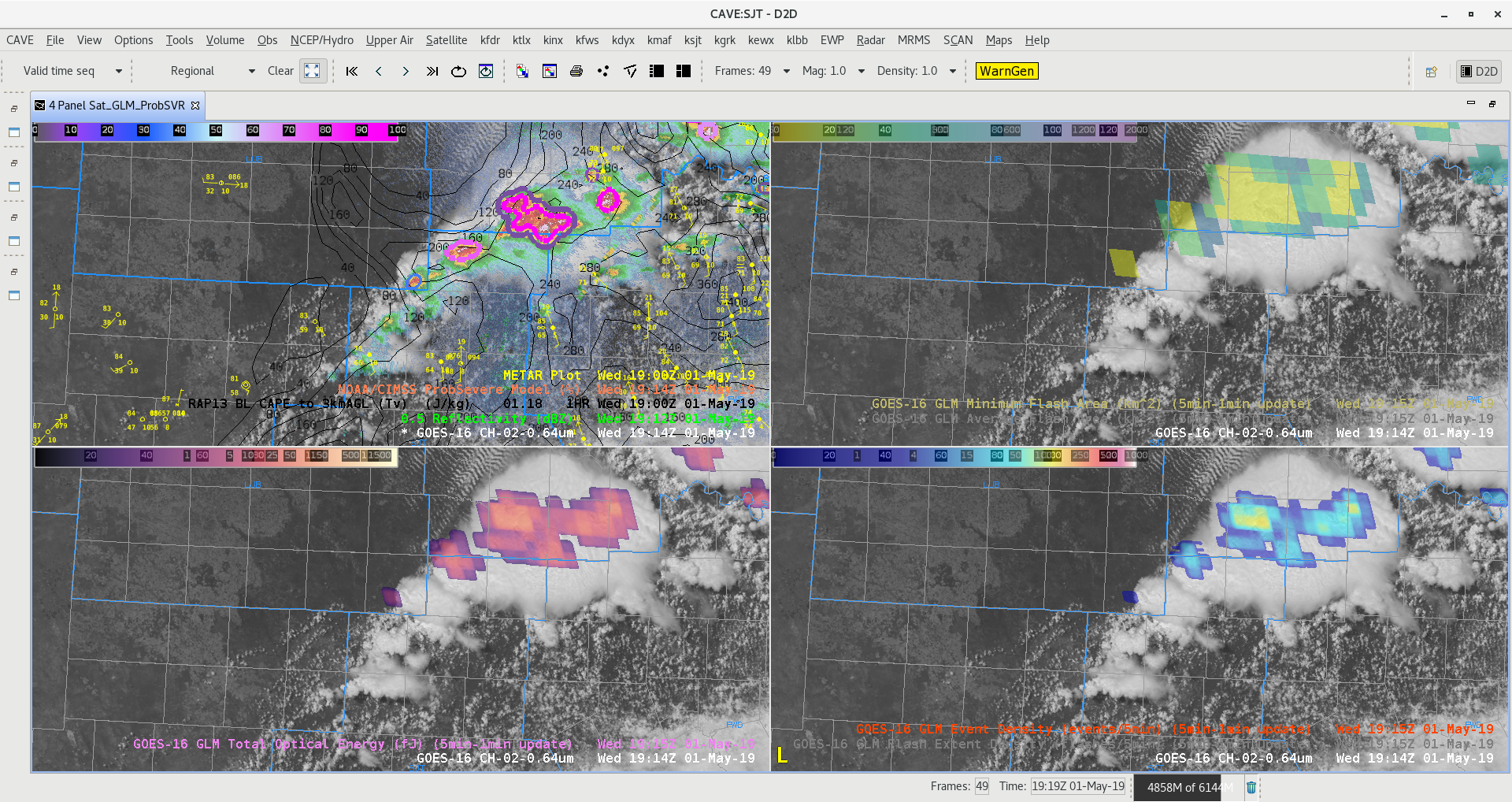 This rapidly developing supercell displayed a GLM lightning decrease as it intensified. This was a good example of optical attenuation due to an updraft core. ENTLN network is displayed, showing that there was a tremendous of CG and IC flashes despite low GLM values. Shown is the TOE product.

The same storm and lightning minimum shown in Event Density. 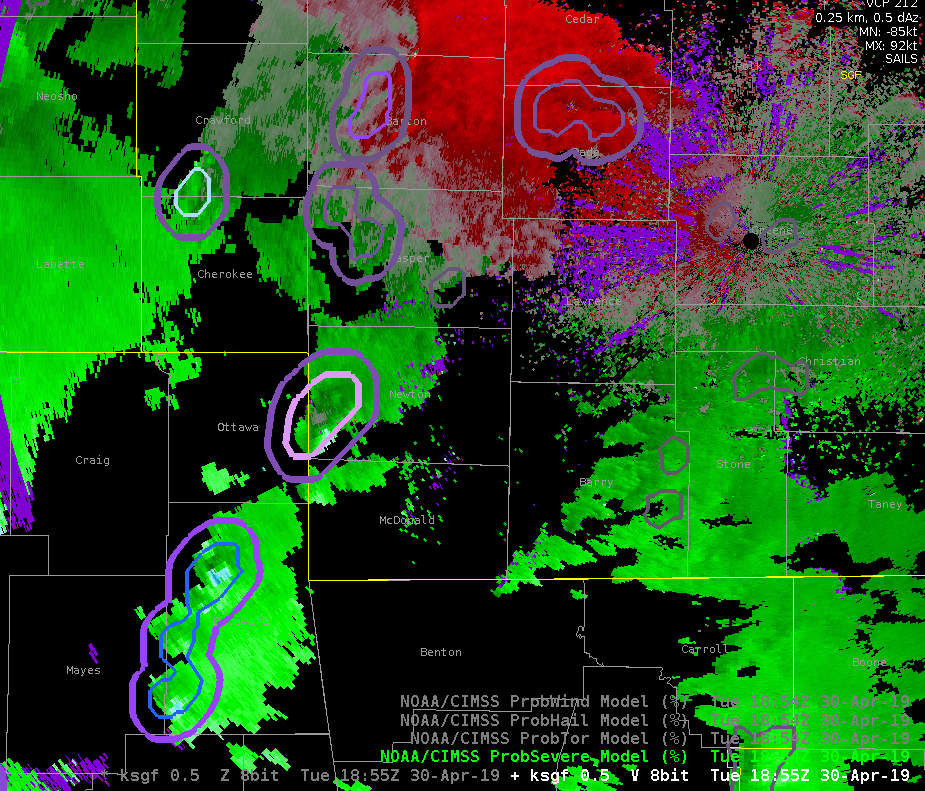 ProbTor was occasionally too aggressive. Only one of these storms was really concerning at this time given the environment and radar tilts further up in the volume. On a day like this, it would likely be prudent to increase the probtor threshold above 3%

Prob Tor contours showing  a new probtor threshold of 10% instead of 3%. This was edited on the fly in the localization file of the procedure itself. This view shows a less cluttered display given the amount of rotating storms this day. 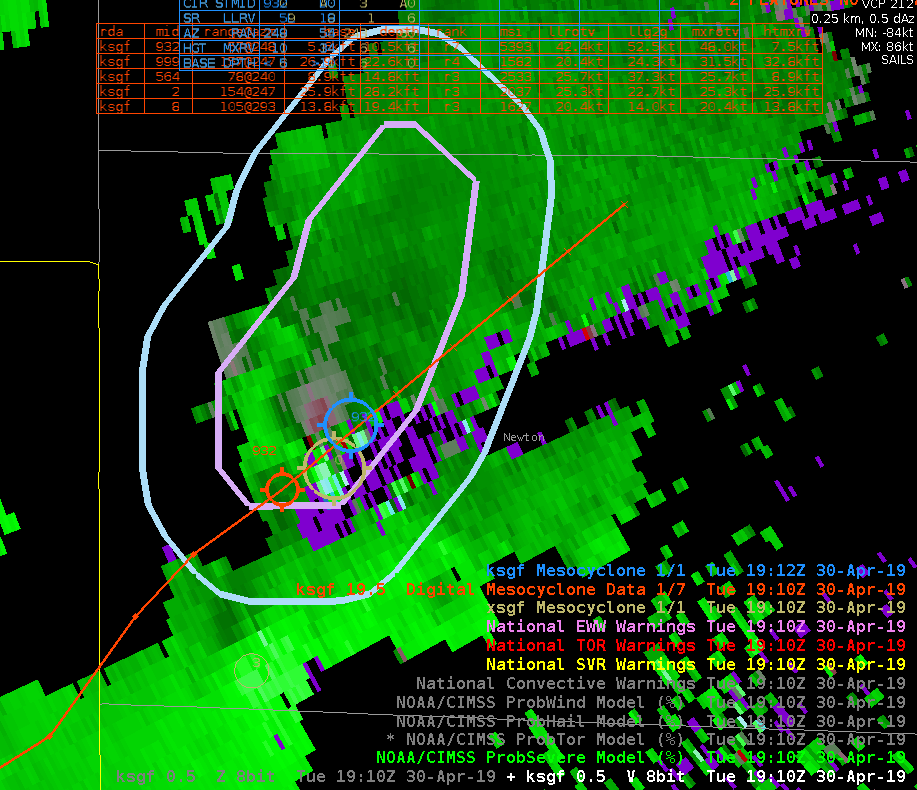 Comparison of MDA products over a weak low topped supercell, as well as showing the probsevere contours. ProbTor was at 47% at the time, prompting the issuance of a Tor Warning.

Watching for new storm development in SW Oklahoma with GOES-16 Vis/IR showing a new storm developing in Figure A.   Area of interest will be in southwest Oklahoma with frontal boundary stalled out and high CAPE from All Sky Layer in Figure B(left image) meanwhile right image shows All Sky Layer PW with RAP13 0-3km CAPE in black contours.  This environment would be favorable for severe weather and possible tornadoes if storm can remain on the frontal boundary.    -Jake Johnson

While it is very easy to plot forecast soundings from whatever model you may choose, NUCAPS provides yet another resource as an alternative to NWP. A strong thunderstorm formed in Mexico around 22z today, almost due west of Del Rio, TX. SPC mesoanalysis showed approximately 2000-3000 J/kg of MUCAPE in the vicinity prior to convection initiation (CI). A quick look at a 20z modified-NUCAPS sounding corroborated the SPC analysis, with ~2400 J/kg of MUCAPE at 20z. The NUCAPS data allow for a detailed analysis of the resulting profile and can be a useful alternative to model soundings, especially the modified products as they attempt to more accurately represent the boundary layer based upon RTMA data. The 20z NUCAPS had ample CAPE in the hail growth region along with 700-500 mb lapse rates in excess of 7C/km. Effective bulk shear in excess of 40 knots coupled with favorable thermodynamic environment likely resulted in this storm producing large hail as KMAF radar sampled greater than 60 dBZ at greater than 32K feet. ProbSevere hail output peaked at 97% (MRMS Mesh = 1.87″) roughly 40 minutes after CI. 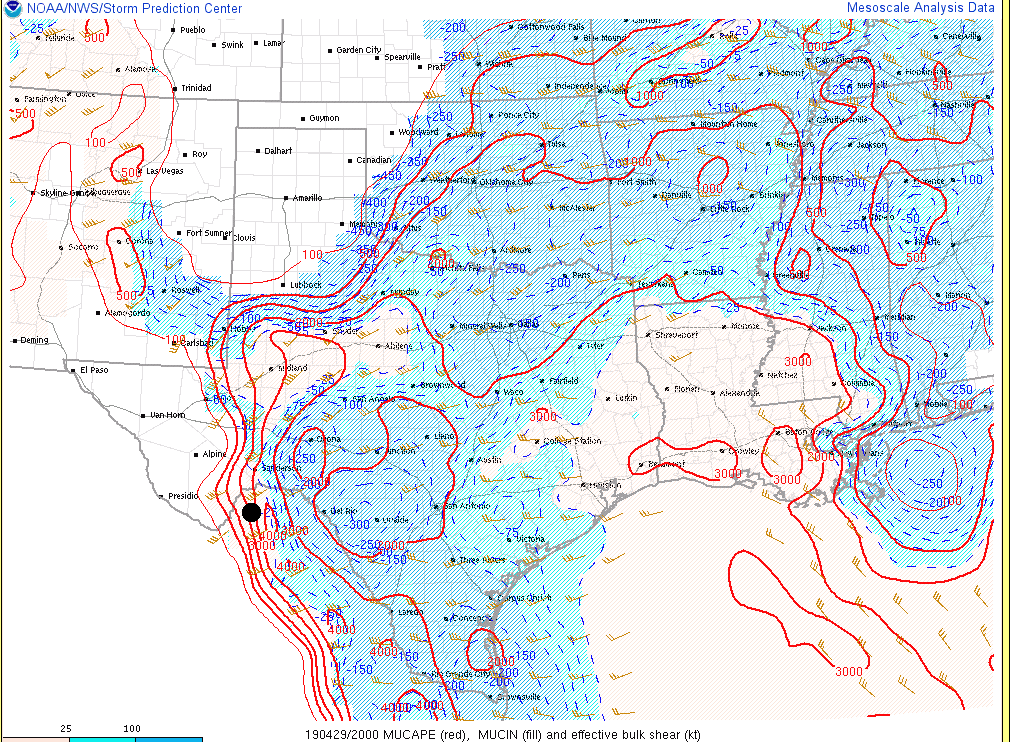 Forcing and storms remain well to the west of our CWA, but the atmosphere is becoming primed for strong to severe storms later this afternoon. LAPS All Sky retrievals show that ML instability has been steadily building, reaching roughly 500 J/kg along the Gulf coast. 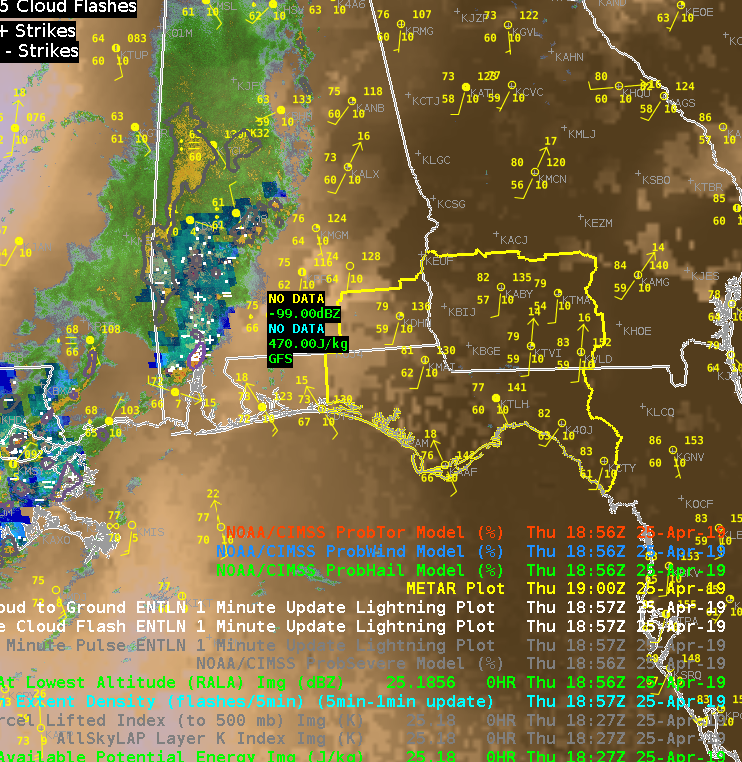 An 8 hour loop shows how the instability has built and gives more confidence that instability will continue to build ahead of the storms to our west.

We did feel that LAPS CAPE seemed a bit underdone given the intensity of the downstream of the convection, so we took a look at the latest NUCAPS retrievals. We examined the point in the extreme SE of our CWA. 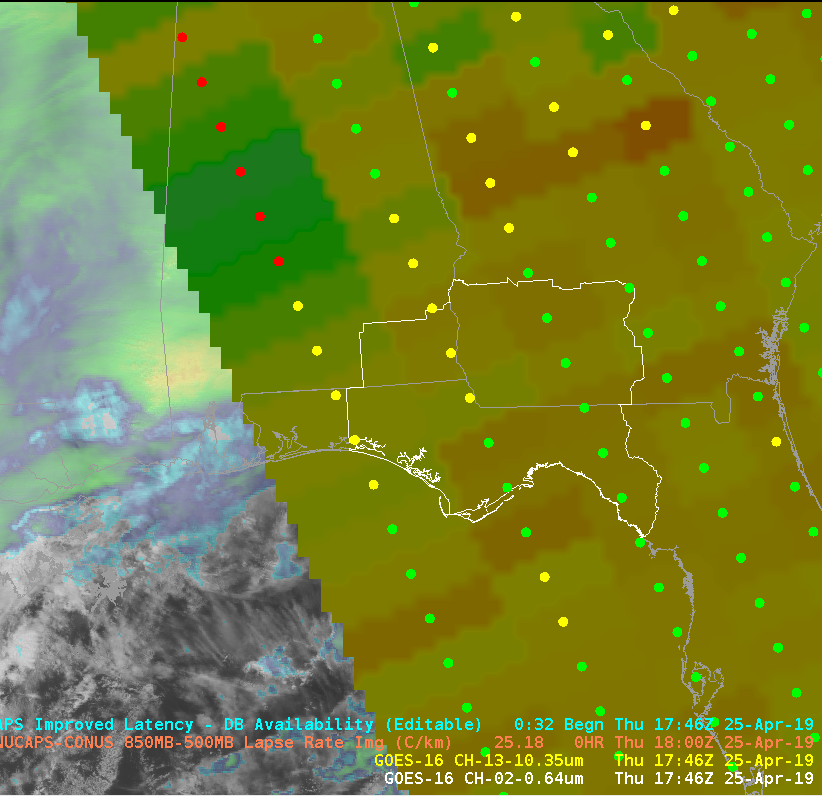 The boundary layer on the unadjusted sounding required some adjustment to match the nearest obs, but overall, seemed to capture the general profile well. I was initially skeptical about the warm nose just above 700mb, but a similar feature was evident on the 12z sounding from TAE. This feature may have an impact on storm intensity and potential hazards, and it would be particularly helpful to see how this feature changes over time. 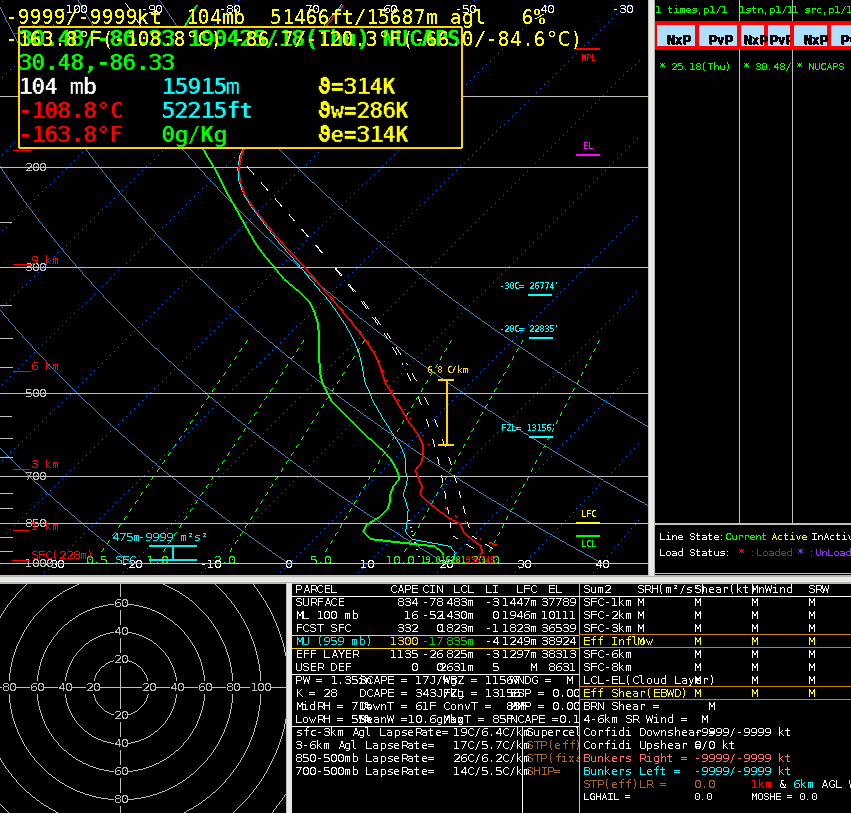 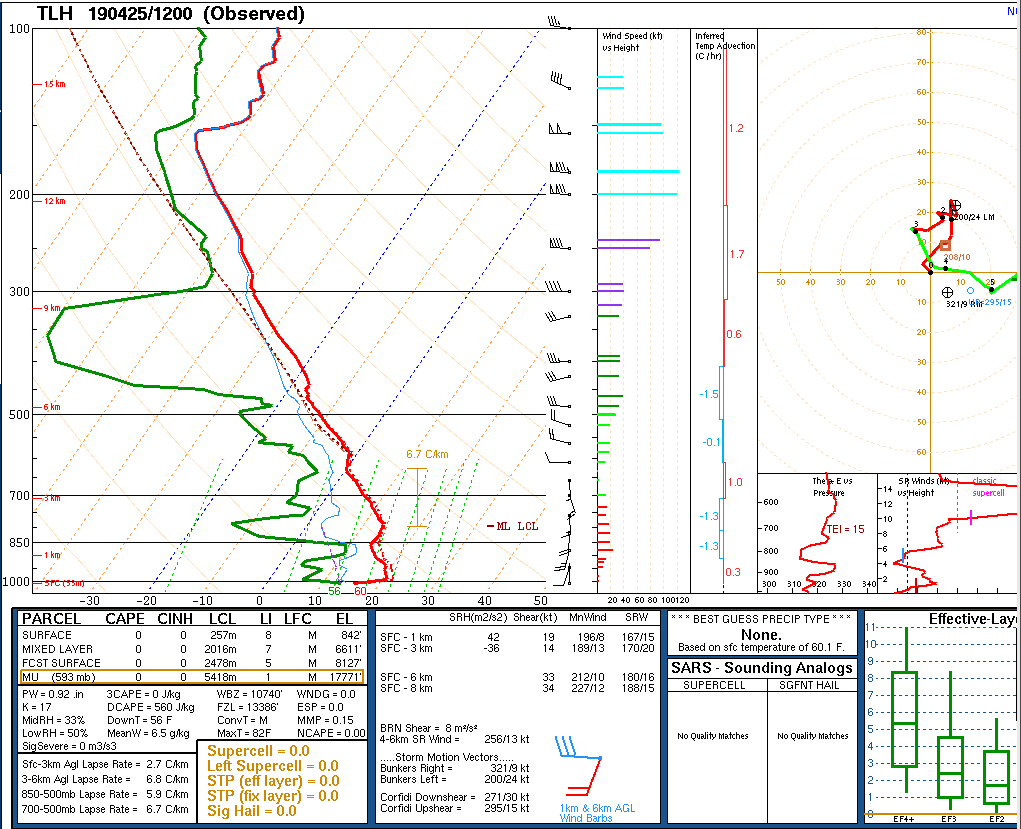 Storms in the EWX CWA early in the shift were generally remaining sub-severe, with what looked to be heavy rain as the dominant threat. The first two loops (below), the storms were riding right along the gradient of the PWATs and CAPE. (continues below)

As the cluster of storms reached the eastern edge of a greater area of instability (below), the concern then turned to how much of the instability would be tapped into and how storms would react, with the thought that they’d likely become more robust. (continues below)

Attention was then turned to how the GLM was observing the evolution of the stronger cluster of storms within the northeastern portion of the CWA. I created a four-panel display, with MFA overlaid onto the mesosector visby imagery (upper left, below), clean IR with TOE overlaid (upper right; I had blinking enabled to capture the highest fJ, but is unseen in this GIF), Event Density with Group Centroid Density overlaid (bottom right, below), and FED with Flash Centroid Density overlaid (bottom right, below). It was fascinating to watch how the lightning unfolded with this particular cluster, and the MFA in particular immediately drew my eye to the storms moving toward the FWD CWA border. The smaller flashes began to blossom and expand out, which then had me look at the TOE and density products. The density products ramped up, but what I found the most interesting is that the MFA seemed to give me that initial clue that this storm was in fact tapping into some of the higher instability and allowing for the updraft(s) to intensify.

I then proceeded to take a look at the MRMS LL AzShear product (below), wistfully wishing I could look at the single radar version of this product. Sure enough, a clear signature developed, highlighting the amplifying wind within this cluster.

Last but not least, looking at ProbSevere, the ProbWind product picked up well on this signature, highlighted below.

Conclusion: I’m continuing to see some promise that there’s something to look deeper into with respect to these additional lightning products, particularly the MFA when used in combination of something like the Event or Flash Extend Density products. There seemed to be a good correlation with the TOE, as anticipated, but I’m still unsure about its utility as a stand-alone product. As for the Average Flash Area, I didn’t even pull it up given the limited amount of screen space I had and what I saw yesterday, with the AFA in particular not giving me hope of being able to gather good info/lead time in comparison to the MFA.

Side note: Had some excellent conversation with the GLM expert in the room and as we were talking and analyzing some of these products, it was noticed that there was quite an extensive channel, lightning that shot out well to the north of this cluster of focus. These GLM products could provide beneficial information when providing DSS to partners, such as letting partners and the public know not to go back outside just because there’s either light rain or the storm had already passed.

Storms are approaching the HGX CWA. GOES-16 imagery shows amply cumulus development across much of the CWA. With temps in the upper 70s and dew points in the upper 60, I expect there to be ample instability in this environment.

All Sky LAPS retrievals indicate ML CAPE just shy of 1000 J/kg, but with this environment, I would expect instability to be higher. 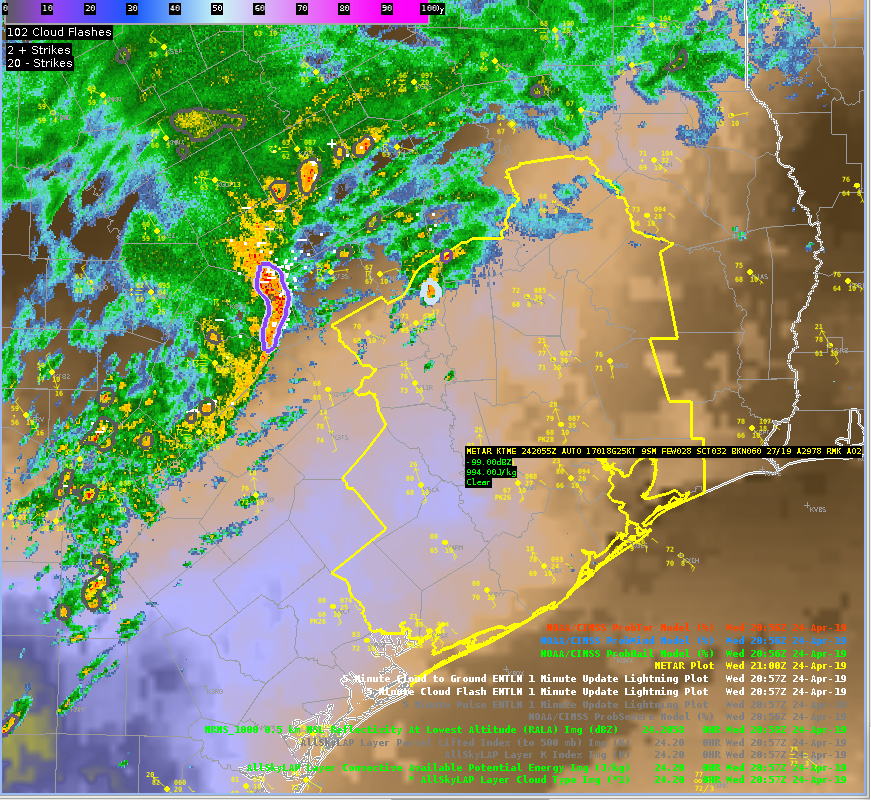 The modified NUCAPS shows a profile more in line with what I would expect to see. In this profile, the surface dew points were close to what surface obs show, but the surface temp did need to be adjusted up a bit. This sounding, coupled with analyzed deep layer shear, leads me to think severe weather is a possibility in this area. 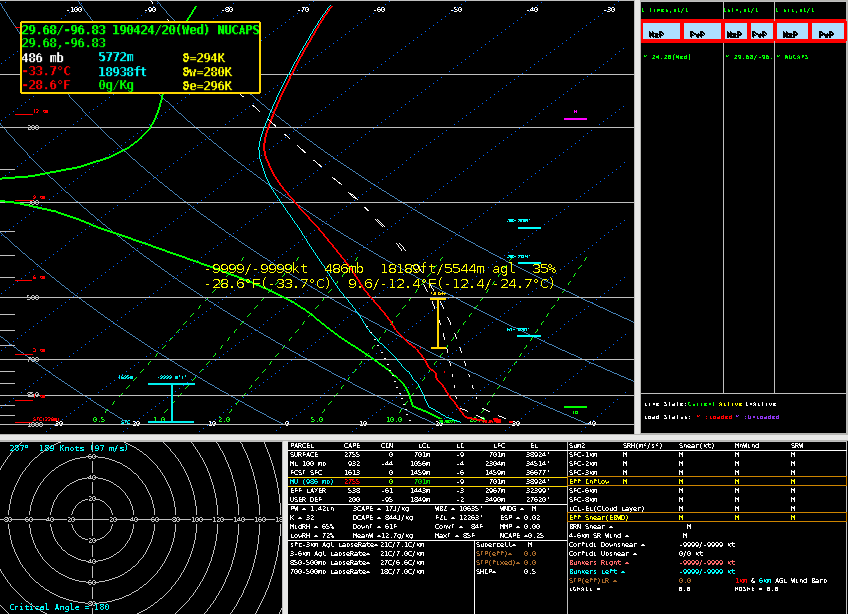 In investigating the environment we’ve deemed the convection to be more or less dependent on synoptic forcing via the cold front dropping southeast. 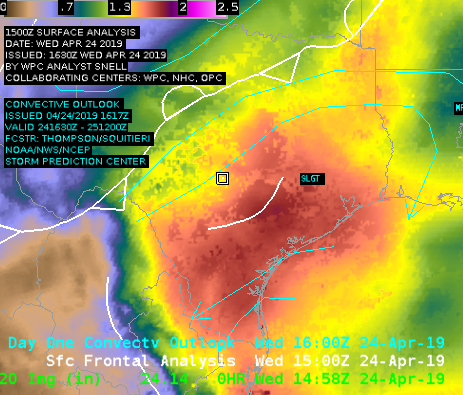 In A, plotted is Total Precipitable Water along with SPC Convective Outlook and analyzed fronts. A couple of things can be noted: TPW is very high under the Slight Risk, and it is displayed very nicely with good resolution contained within the gradient. This is a good example without going into too much detail about how our environment is primed for severe weather. However, NUCAPS Gridded Data has not come into our area as of 20z. This makes it hard to test the product and how it captures the boundary layer. 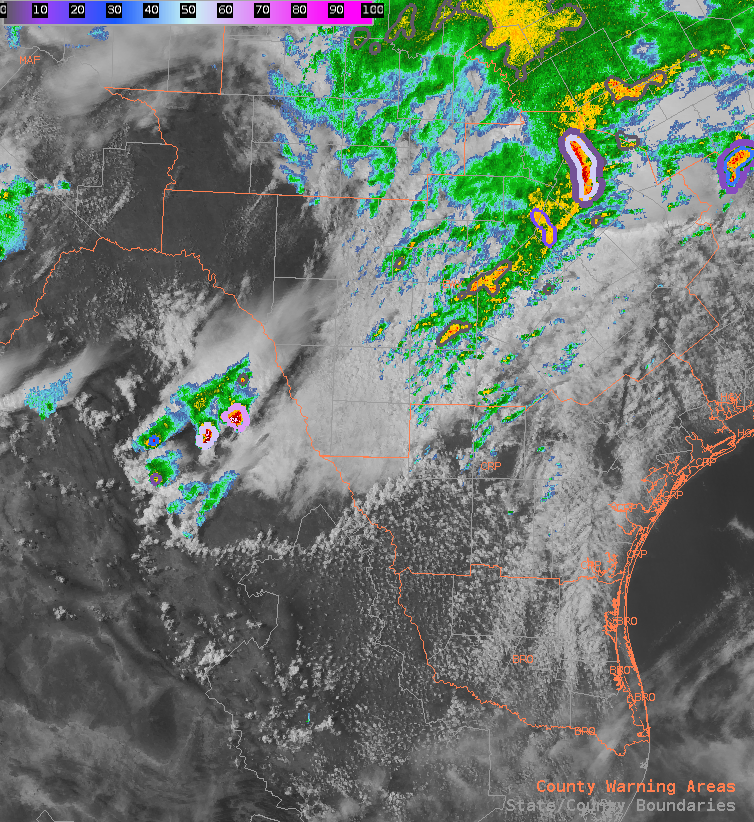 As we wait for the cold front to drop SE, our attention is focused on convection happening in NE Mexico (pictured in B). These cells popped up right along the CAPE boundary between values of 300 j/kg to 1500 j/kg. 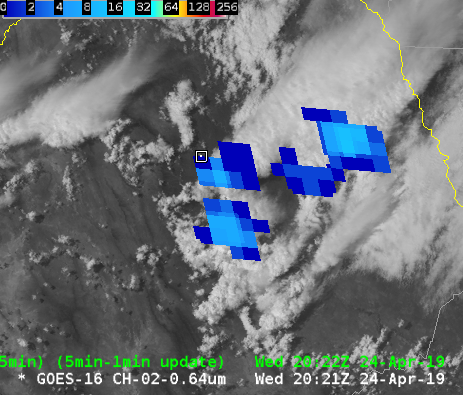 As can be seen in C, the GLM has indicated these storms contain lightning, thus they are intensifying in nature. We will now be monitoring the hail threat.

Today was a great example for how the improved resolution from All-Sky LAP allowed us to hone in on exactly where new storm development will occur.  Convection across Mexico developed where the front sagged south along the moisture/CAPE gradient. While in this case the CIRA Merged TPW showed the same gradient, the resolution was still better with All-Sky. Baseline blended TPW as well as satellite derived TPW/CAPE were useless due to either being overly smoothed, or not displaying in cloudy areas. Great diagnostic tool. 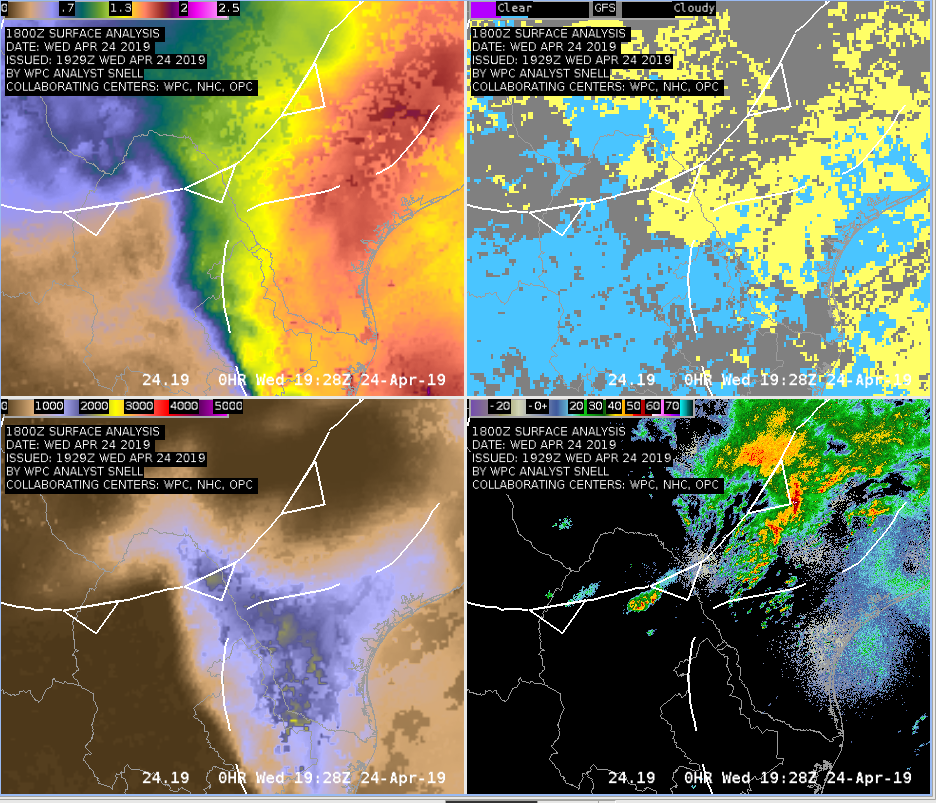 NUCAPS retrievals  became available around 21z, so I decided to do a new mesoscale analysis. I wanted to know about the air in the warm sector that the storms will likely be ingesting. The first retrieval I looked at was the southern-most green dot in the eastern most MUCAPS swipe. The sounding in this retrieval came in with a surface temp about 20 degrees cooler than the observation, so I’m thinking this retrieval is either being contaminated by ongoing convection or actually sampling north of the warm sector. The retrieval just to the south of that had surface temperatures more reasonable, and the associated skew-t is shown below.

After a quick adjustment to the lowest points on the sounding, this clearly looks like a severe weather sounding. I’m hesitant to rely on CAPE estimates given the dependency on the boundary layer, but indicies more reliant on mid level obs (LI) are still indicative of strong to severe storms. This compares well to all-sky LAPS retrievals (above, right). 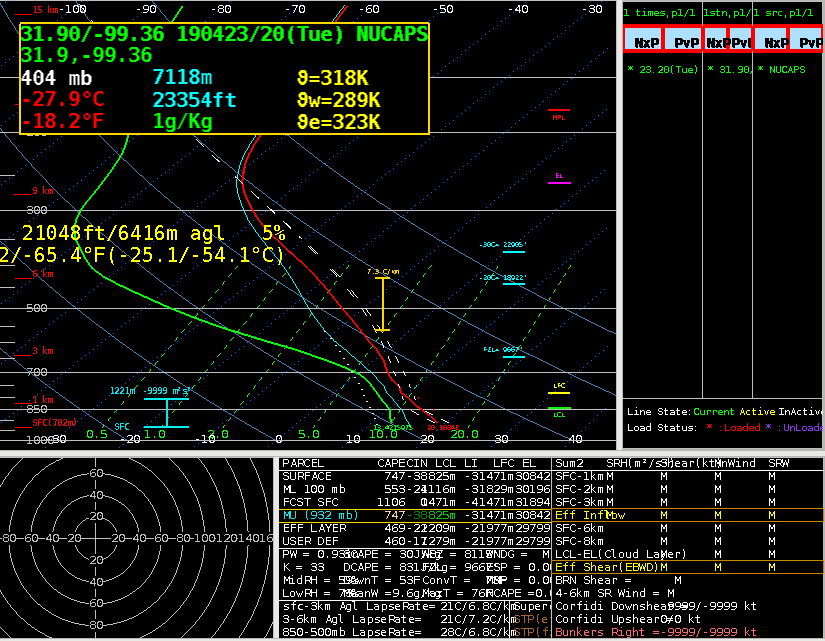 In typical operations in which I do not have access to these products, I would rely on the SPC mesoanalysis (below) to estimate instability. The NUCAPS and LAPS All Sky retrievals do somewhat increase my confidence that the mesoanalysis is close to reality. However, Given my conceptual model of how the atmosphere should be behaving, I was already highly confident that the atmosphere is quite unstable in the warm sector, so the increase in confidence from NUCAPS/LAPS is somewhat limited. 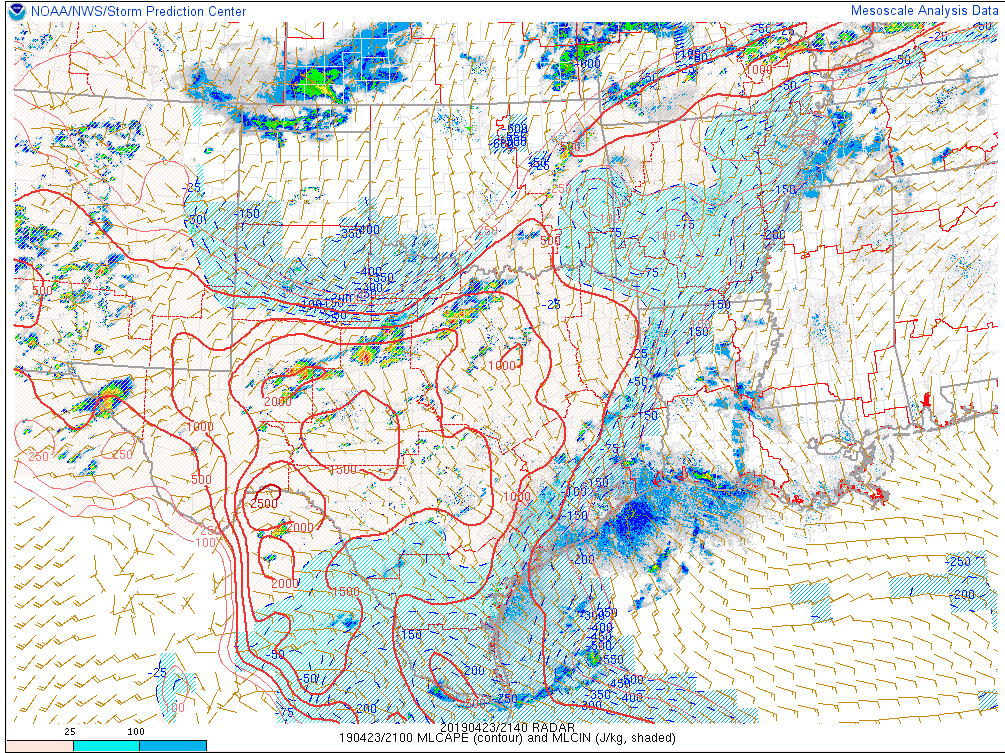