We noticed a relatively high ProbSeverev3 (53%) on a rather innocuous looking storm (MESH around 0.5”) around 2030z. This was higher than the v2 value of 36%. The individual probs were relatively evenly weighted at lower values near 30%. 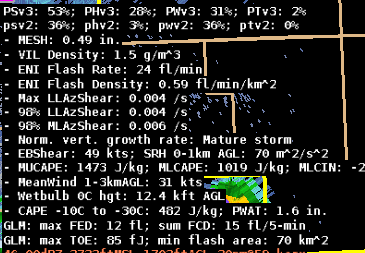 GLM FED was unimpressive, though it’s unclear how much of this is related to lower detection efficiencies in this area. ENI total lightning was halfway decent. High DCAPE values and other environmental parameters may have been sending the ProbSevere v3 higher. 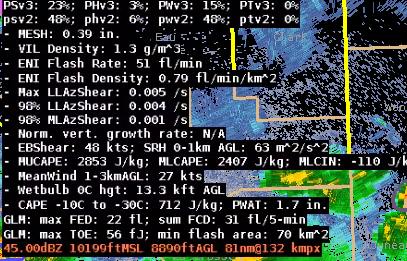 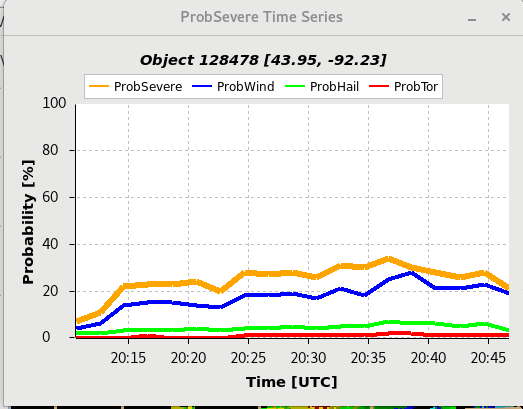 When loading GLM Flash Points, there is no preset density of the data. 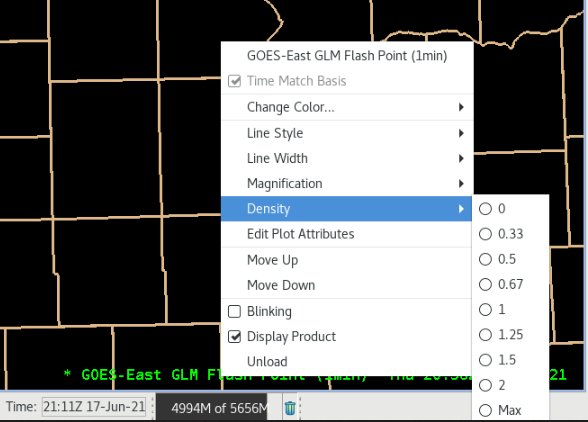 This does affect how much flash point data is displayed depending on the zoom level of the map. In the 2 maps below, within the red square of the larger map, 13 flash points are indicated as opposed to 15 once you have zoomed in further:

Unless the forecaster knew to increase density to max, this could obscure some important clusters of lightning coincident with storm evolution. 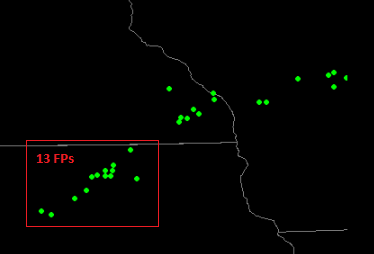 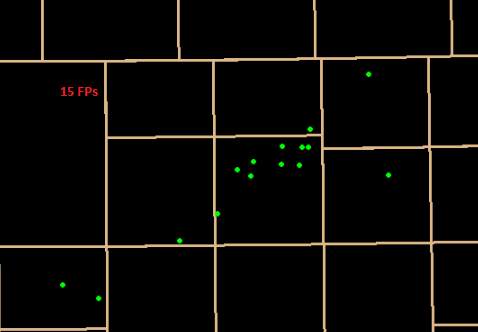 Noted GLM flash points really help speed up the process of identifying where the cell of interest was located.  In the past, I would have to make a manual, on the fly “calculation” in my head where the actual cell was located.  If there was only one cell, that was easy by looking at radar.  When you get into the complex thunderstorm situations, that can be difficult and in the worse cases, it is too involved.  Seeing how the flash points seems to fix and/or surround the updraft, really helps speed this process up and give confidence to the forecaster which cell is the cell to be worried about.  This could also help with warning confidence.  The  image below shows an prominent example of this. 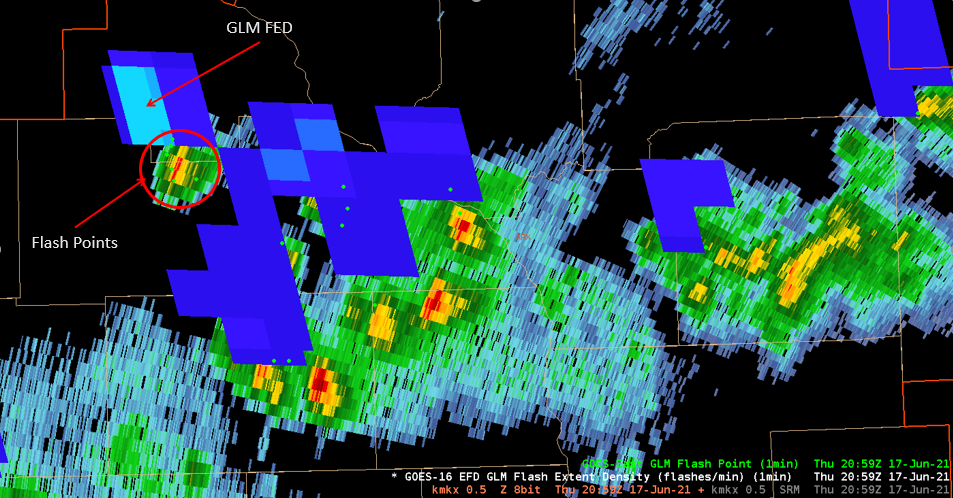 It is hard to see the flash points but there are 6 points surrounding the core of this small storm.  I chose this one to verify the positioning as it was on its own so it was easy to figure out which one it came from.  As such, seeing how close this is to the core, it makes it much easier to identify which FED “spike” is from which core.

When looking at satellites with flash points, it also help confirm the location of the core as the ABI imagery is parallax corrected. 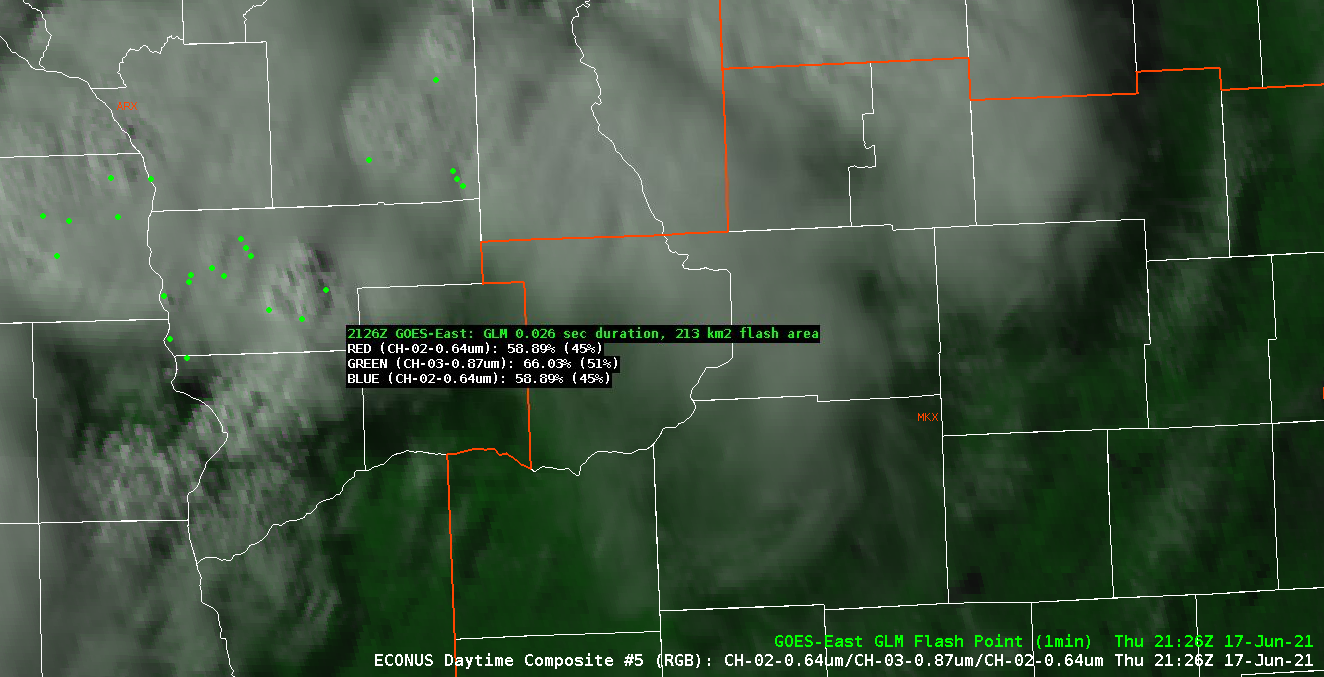 GLM lightning data provides very useful information to the operational forecaster, especially when properly combined with radar/satellite imagery. Would it be possible to take best practices suggestions from frequent users to lead to the creation of some pre-set 4-panel procedures that could be found in the AWIPS GLM data section (similar to what is available with radar base date, etc.)? 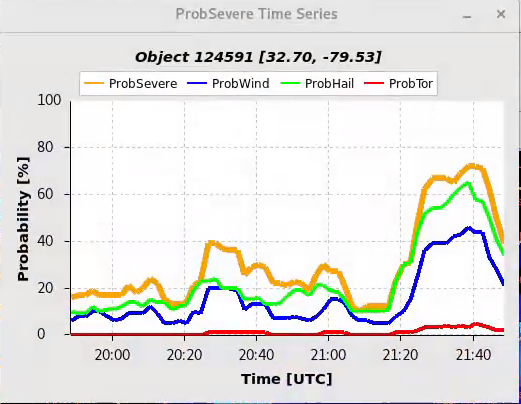 A thunderstorm located east of Charleston appeared to have some supercell characteristics as it moved south-southeastward towards the coast, with a kidney bean shape in reflectivity and a weak mid-level mesocyclone, as well as some deviant motion from the northwesterly flow. As it was over land it appeared to be strong but sub-severe, and maintained generally consistent 20 to 35 percent ProbSevere in v3. ProbSevere v3 seemed more consistent overall, with v2 jumping up and down more often, dropping down into the single digits at times. ProbSevere v3 did jump down below 20 percent briefly when GLM FED really dropped down. But the consistent lower-end probabilities at least indicated that this was a storm to be watched relative to the lower v2, and this may have at least allowed lead time on a low-end special marine warning before it moved offshore and strengthened.

The timeseries is somewhat useful if you just have one storm to look at, but with multiple storms I would probably just look at the loop in the ProbSevere plan view instead.

After it moved offshore, GLM FED increased, slightly in advance of a jump in MESH and associated jump in ProbSevere v3. ProbSevere v2 jumped ahead of v3 in probabilities as often occurs, though at that time MESH around 0.9 inches may have warranted the more conservative ~50-60% v3 approach. Later MESH jumped up to around 1.3 inches, and ProbSevere v3 jumped above 70 percent at this time as well. 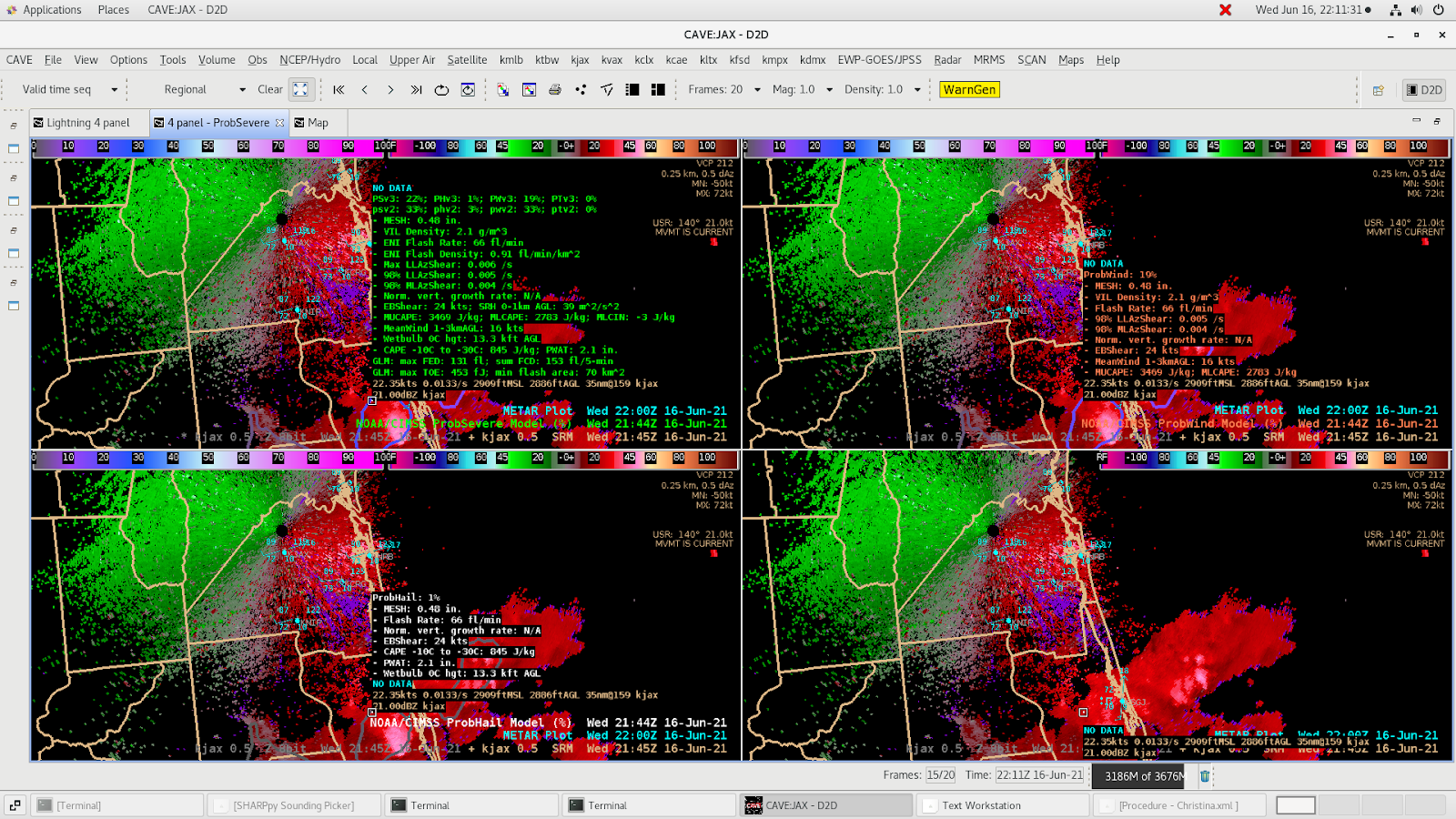 The 0.5 degree SRM from JAX shows a concentrated area of wind within the cluster of storms in St. John County, FL with radar estimates of the wind near 50kts. Given the lightning jump illustrated by FED values quickly rising to ~170 flashes per 5 min, the storm is intensifying. 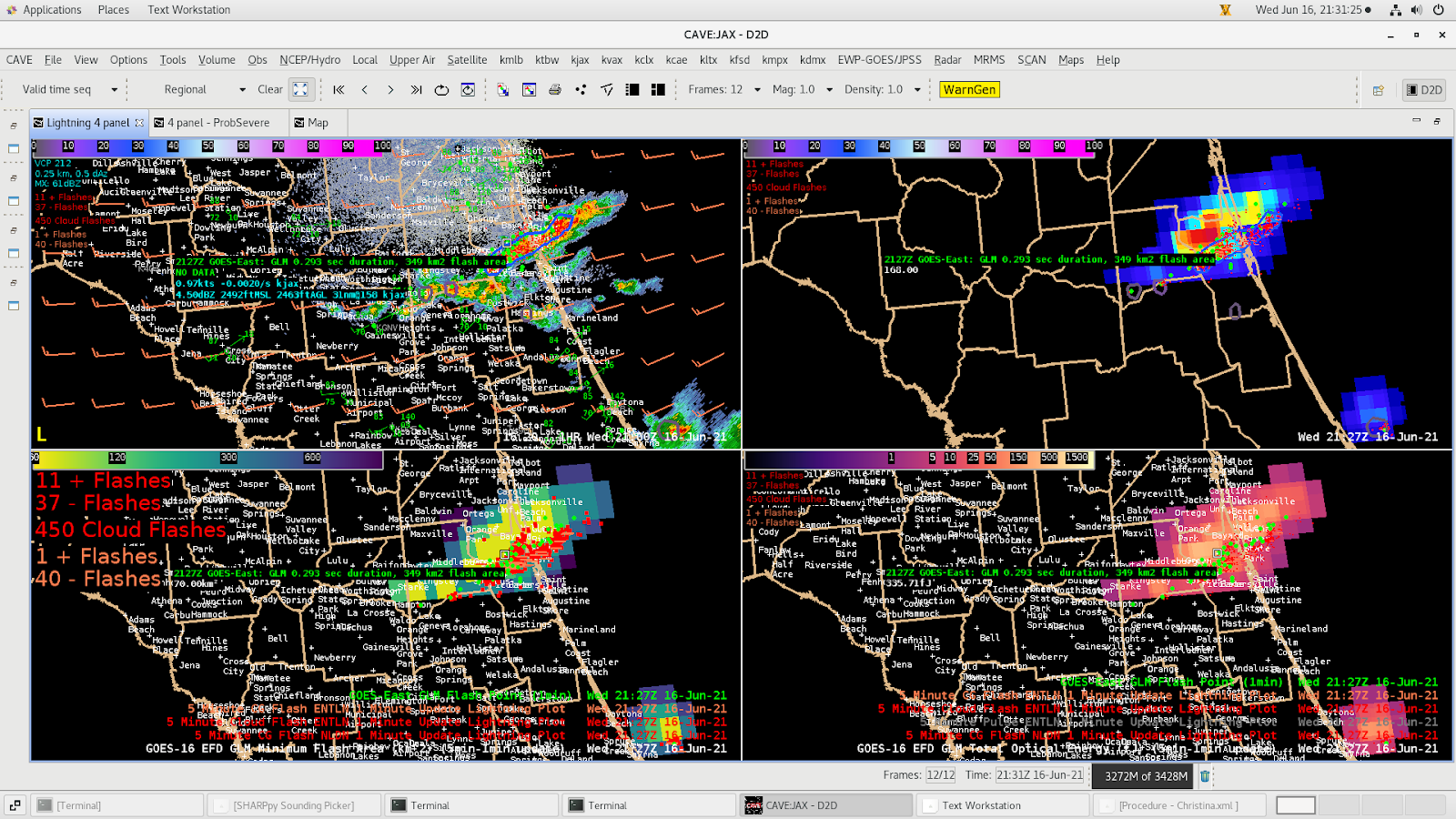 However, ProbSevere values are rather low with version 3 showing only 22% and version 2 showing 33%. ProbWind surprisingly was even lower with only 19%. This is a reflection of the lack of base radar data involved in the ProbSevere and ProbWind algorithms. Especially for ProbWind, base radar velocity data needs to be included in ProbWind for this product to be useful in identifying wind producing severe thunderstorms.

It would be useful to integrate base radar data from multiple single radars and combine these values into one algorithm. It may be useful to identify notable/sharp changes within velocity data between pixels which could help in picking out downdrafts.

On the afternoon of June 15, 2 different convective regimes were noted across Florida, with different GLM lightning characteristics. A cold front was sinking southward towards the Florida panhandle, with convection developing along the Gulf sea breeze along the FL panhandle. Convection of more uncertain forcing developed in Central Florida.

Convection along the FL panhandle had higher MLCAPE and DCAPE due to mid-level drier air and steeper lapse rates, with somewhat lower PWATs. SBCAPE in excess of 5000 J/kg and MLCAPE in excess of 3000 J/kg was unusually high for this region. Convection in central FL was in a more tropical air mass, with PWATs at or above 2 inches and more saturated profiles. Convection in the FL panhandle developed in an area with very high microburst composite parameter values, indicating conditions very favorable for microbursts and localized damaging wind gusts. 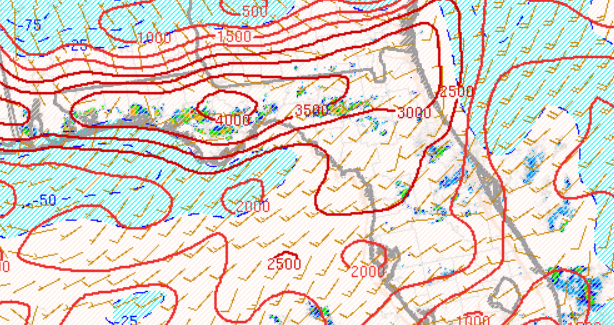 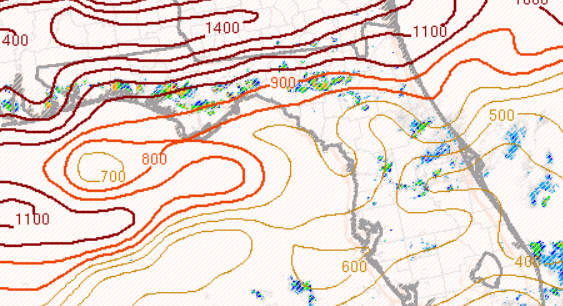 The FL panhandle convection was more intense on radar and also had higher flash extent densities. It also tended to have lower minimum flash areas, centered on locally strong updrafts. Notable hail cores were observed aloft, and melting of these hailstones caused strong downdrafts and damaging wind reports, and in a few instances quarter size hail made it to the ground, with one instance of golf ball size hail..

The central FL convection was weaker and had also been going on for longer, so there was some convective debris stratiform precipitation with larger minimum flash areas. Flash extent densities were lower than in the FL panhandle. There were still areas of lower minimum flash area centered on the updrafts.

The GLM flash points were very useful and lined up with the NLDN and ENTLN strikes and flashes. The parallax correction was especially useful for DSS purposes as partners often request notification on lightning strikes within a particular radius on the order of 8 to 20 miles, so an accurate location is important. At first glance there were much less flash points but this appeared to be due to the data only being 1 minute data without having the 5 minute accumulation that the NLDN and ENTLN offers. Having this similar 5 minute accumulation would be imperative for using the GLM flash points in operations. The sampled metadata for the flash points appeared less useful operationally. The flash area would be more of interest than the duration, but with a large number of flash points some sort of graphical depiction would be needed, and flash extent density seems to serve this purpose.

One interesting thing that was noted was v3 had much lower ProbHail than v2, while still having decent ProbSevere (mainly wind-driven values). We speculated that this was due to some of the machine learning based on environment and climatology, since severe hail would be less likely this time of the year with higher freezing levels/hot surface temperatures causing melting. However, in this case a golf ball size hail LSR was issued at 19:59z (report time appeared to be incorrect) for 2 ENE Saunders in Bay County, FL. This was comparable to MRMS MESH which maxed out at 1.89”. 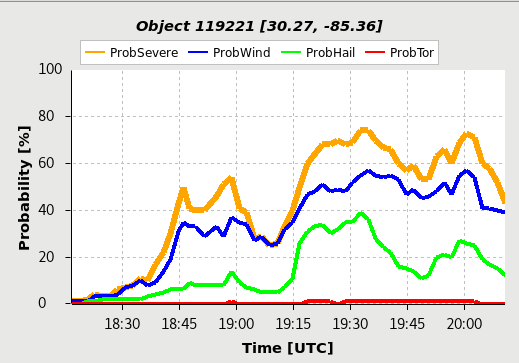 Gridded NUCAPS and individual NUCAPS soundings at 1840z showed steeper 700-500mb lapse rates than what was shown on the SPC mesoanalysis and some of the morning soundings, in areas away from convection. It’s hard to say which one was right, but the hail cores observed do seem more consistent with 700-500 mb lapse rates of near 7 C/km or greater. (Note that it would be useful to have contours to go with the images on the gridded NUCAPS plots.) 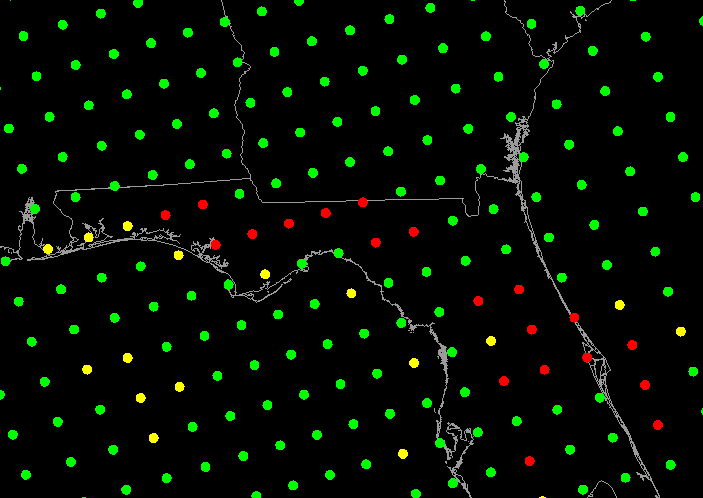 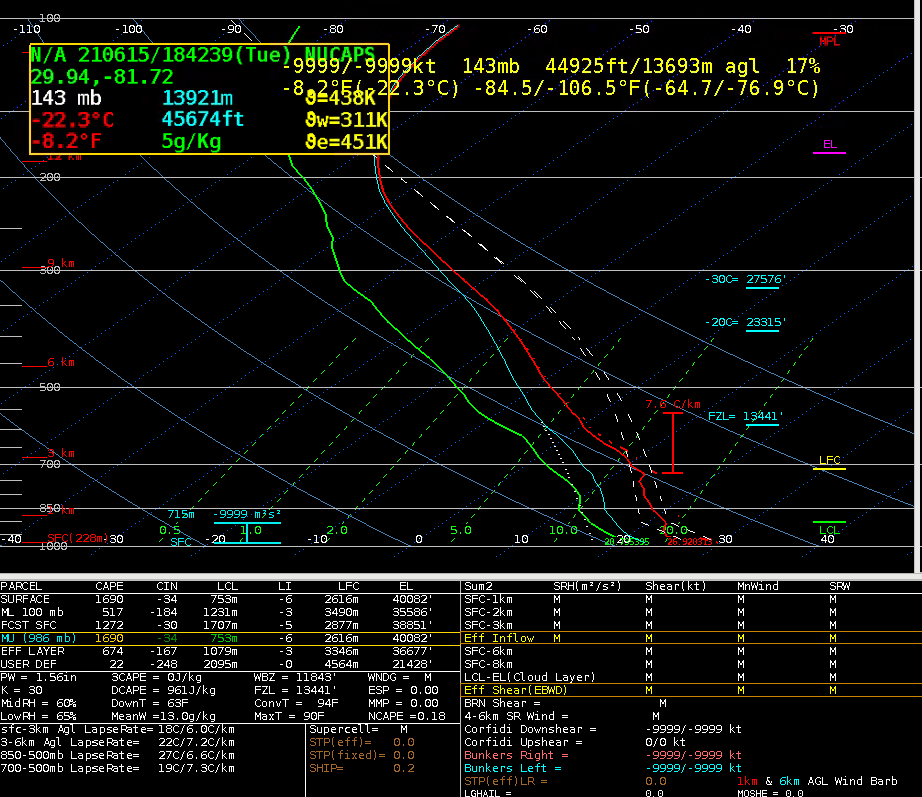 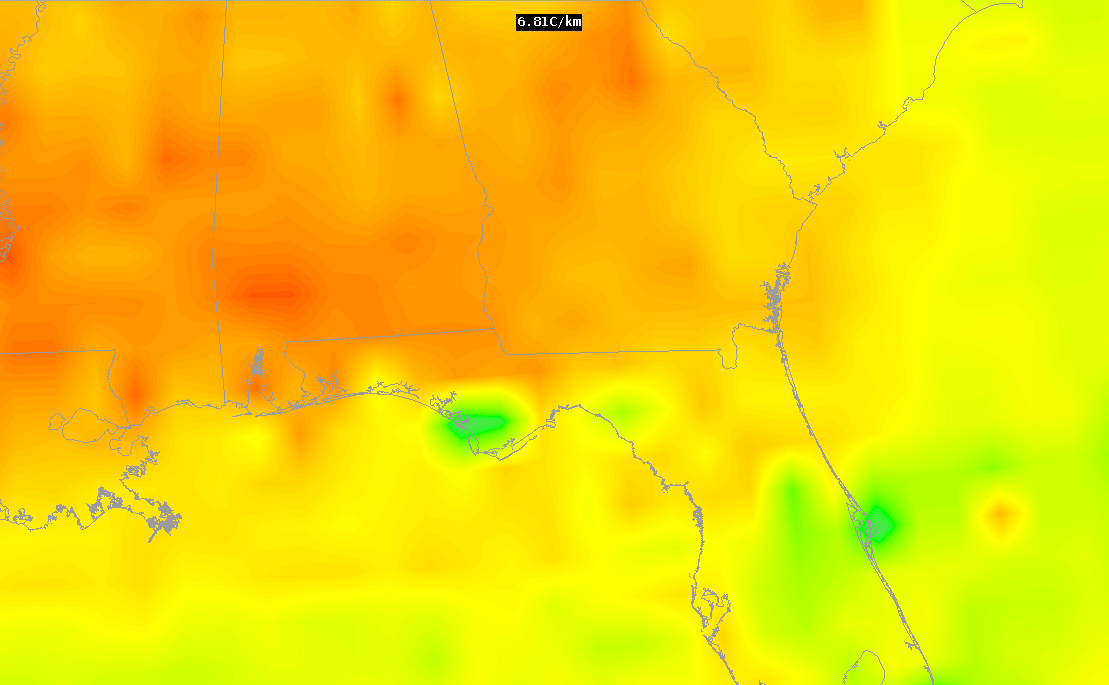 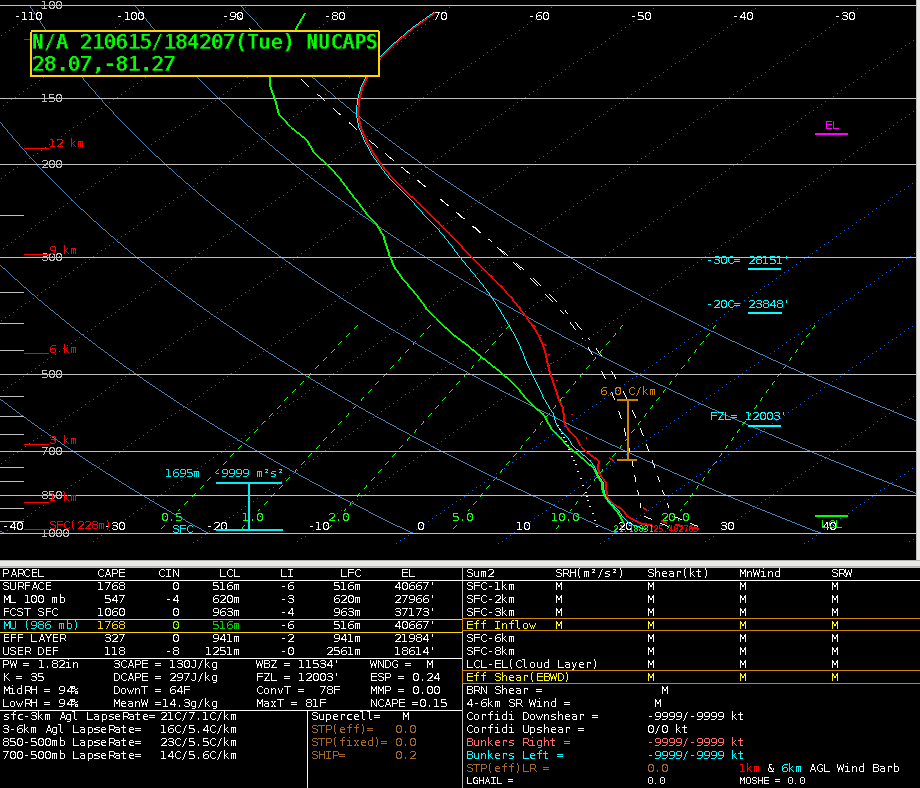 NUCAPS did indicate some of the higher CAPE values, but with missing data in much of the area of interest as convection had already initiated when the pass occurred. 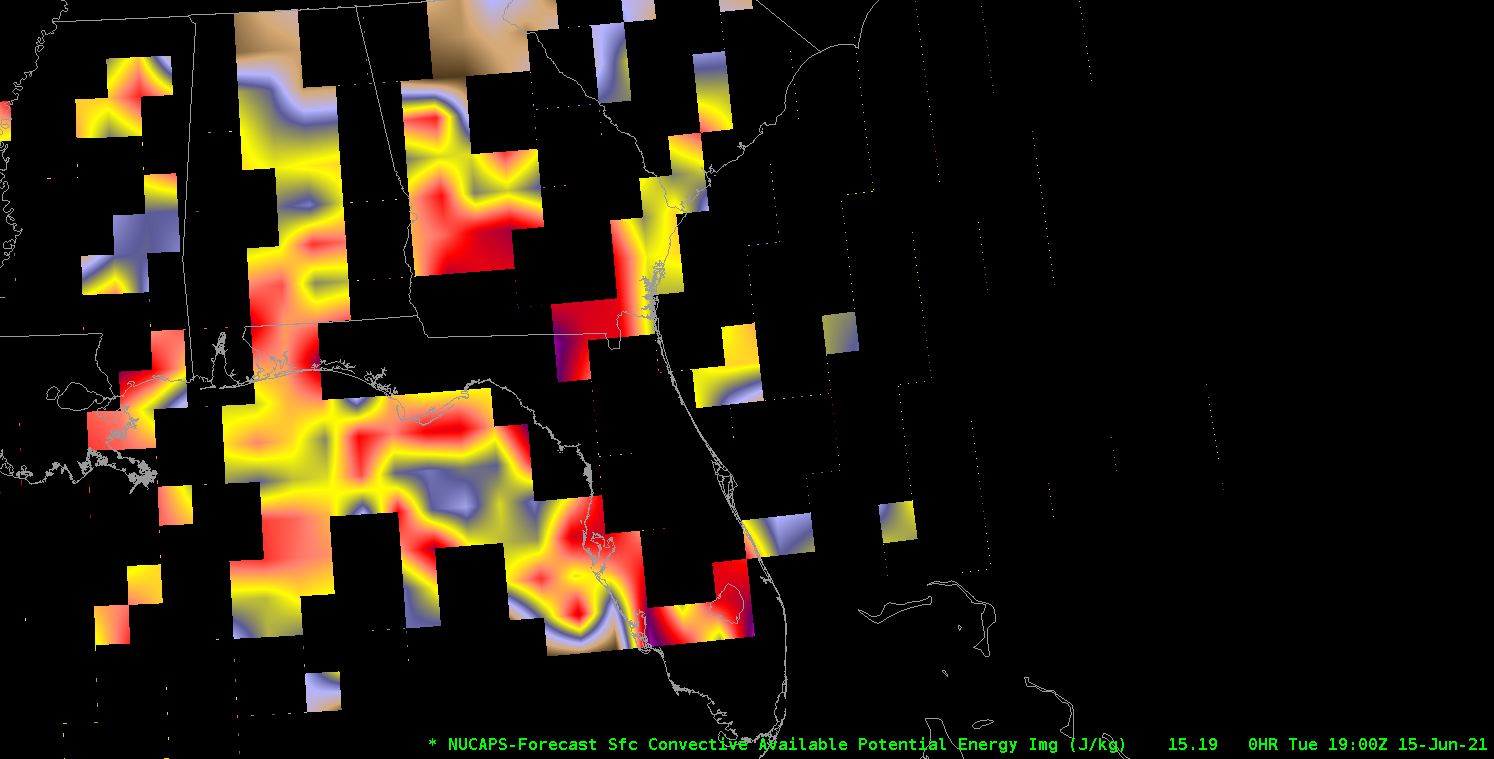 Looking at multiple levels of optical winds can be useful in analyzing the amount of wind shear over an area in near-real time. In this case, the tool shows limited wind shear, so one would expect storms to be a bit more short lived. Would it be possible to add wind shear fields directly into this tool for quicker analysis? 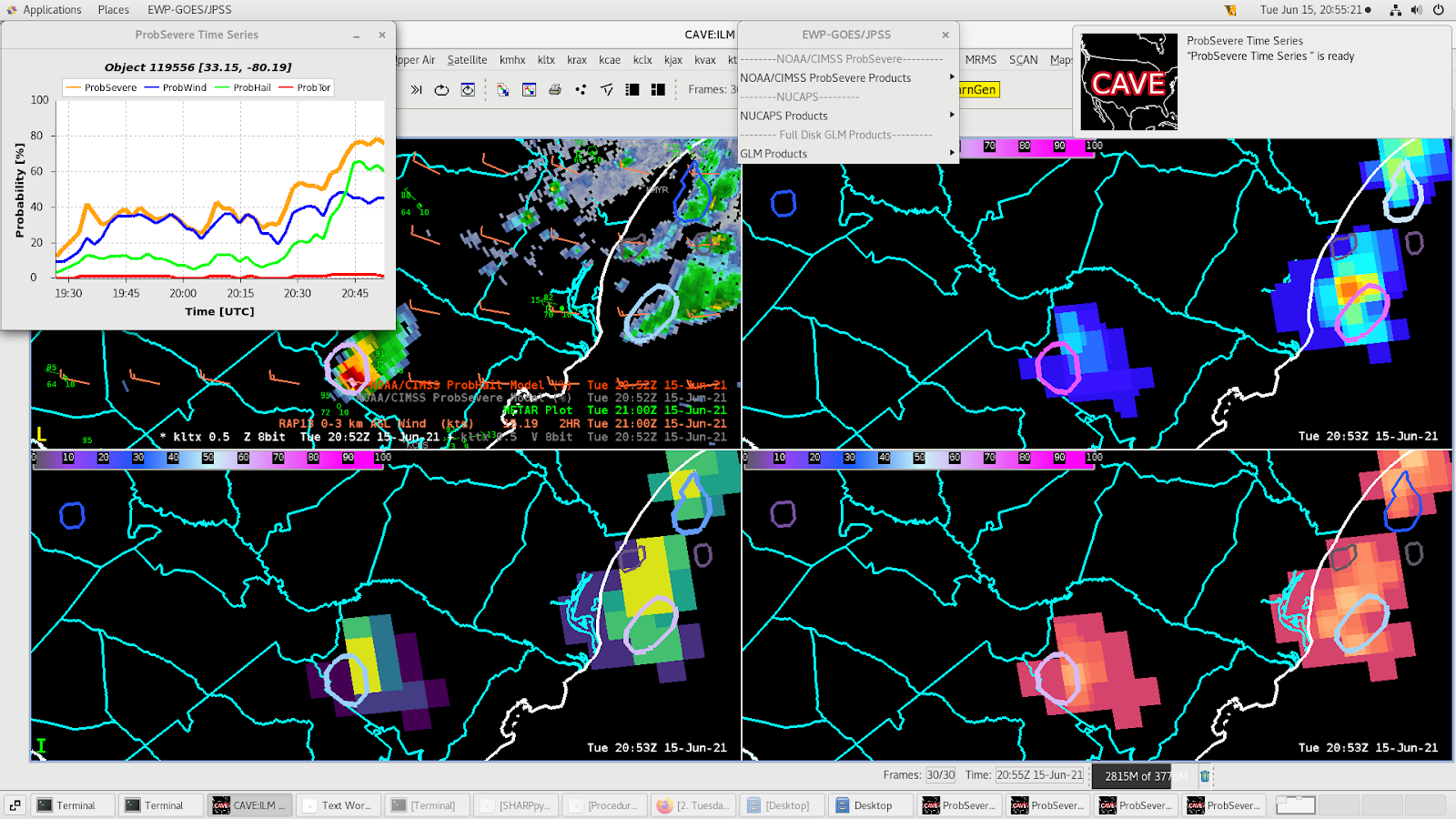 Watching the meteogram on this storm, we can see the probhail values jumped up to 65% over the last 15 minutes. It’s probably best to have ProbHail values of 60% or more last for a few volume scans because that suggests the residence time in the hail growth zone is long enough for hail to grow and become 1” in diameter or larger.

Assessing the various GLM lightning products, I found the MFA and FED particularly useful in correlating the more active thunderstorm core / updraft areas. TOE was useful, but maybe a slight change in color scale may help to better identify those very active convective areas. (perhaps the sharper color gradient change could start at a slightly higher value than currently)

The GLM flash point data didn’t show as much ‘clustering’ as I had expected to see, as compared to other surface-based data sources (ENTLN). Is this related to a data display density or a more sensitive surface-based lightning detection? However, due to the parallax correction, the flash point data did line up with fairly well with active convection, although there were a few flash point detections well displaced from any radar reflectivities (see bottom left)–perhaps related to stratiform lightning?

Comparing the Flash Extent Density to base reflectivity in northern Florida, we noticed an area of exceptionally high flash density just north of the best convection. Adding flash points (parallax corrected) to the radar image and they were more where one would expect in the storm. This indicates a parallax issue with the Flash Extent Density. This is a good example of where the flash points can be a good sanity check when interrogating a storm.