During the first opportunity to sit at AWIPS-II and familiarize myself with the different datasets to be evaluated during the EWP, I noticed an interesting drop off of CAPE values from the All-Sky suite.

Over the course of an hour, the All-Sky CAPE values oddly drop off by about 2/3 betweem 1458Z and 1528Z, only to rise again in the next frame available at 1557Z. While understanding that atmospheric conditions, such as a propagating storm could cause a drop, analysis of the morning doesn’t indicate the presence of such conditions.

A visible satellite loop of the 0.64 micro channel from GOES-16 shows early morning stratus dissipating between approximately 14-16Z. During this time, the stratus burn off is indicative of the boundary layer beginning to mix out with the sunshine and surface plots corroborate with warming temperatures.

As I’m unable to find anything meteorologically that would support the CAPE drop and rise over 60 minutes, it’s a little concerning as a forecaster too see a jump like this the first time using it. I thought this would be good to point out as a first blog post.

Looking at the different precipitable water (PW) products available in the HWT and doing a quick overview the All-Sky products provides a great first guess to fill in the PW where it is cloudy. Both the Merged TPW and the All-Sky take the first step in filling in where there are clouds. The image below  shows the sheer volume of data that isn’t available due to the pesky cloud cover. The 4-Panel to the left shows the All-Sky PW and CAPE on top vs. the raw derived PW and CAPE from GOES-16. On the right you can see the visible satellite and the All-Sky mask showing that most of the data, especially over Texas and Oklahoma is raw GFS (gray areas) at this point. 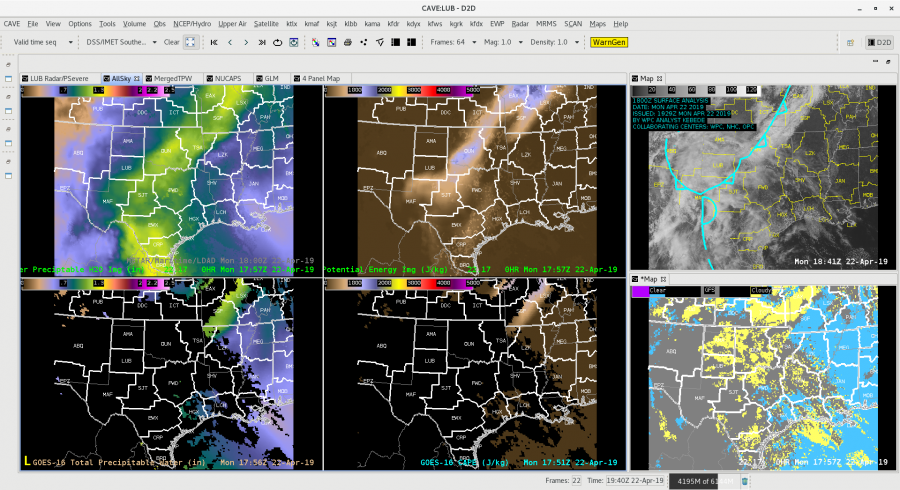 Looking at the Blended TWP vs. the All-Sky there are significant differences over north Texas and Oklahoma for this time frame. The BTWP product “is not forecast model dependent. ATPW uses  GFS model winds to advect the microwave retrievals and the GOES-16 component uses GFS in its TPW solution.” You can see where the blended product (big window below) only shows about 0.75 in PW, while the All-Sky is showing 1.25 in. across the Norman WFO. This can make a big difference when looking at rainfall forecasting and trying to assess just how much moisture in the atmosphere is over an area. In this case would certainly lean towards the All-Sky and then compare the information to other model soundings (from the HRRR, NAM, ECMWF, etc.) and to actual Upper Air soundings to see how the areas populated by the raw GFS are doing. 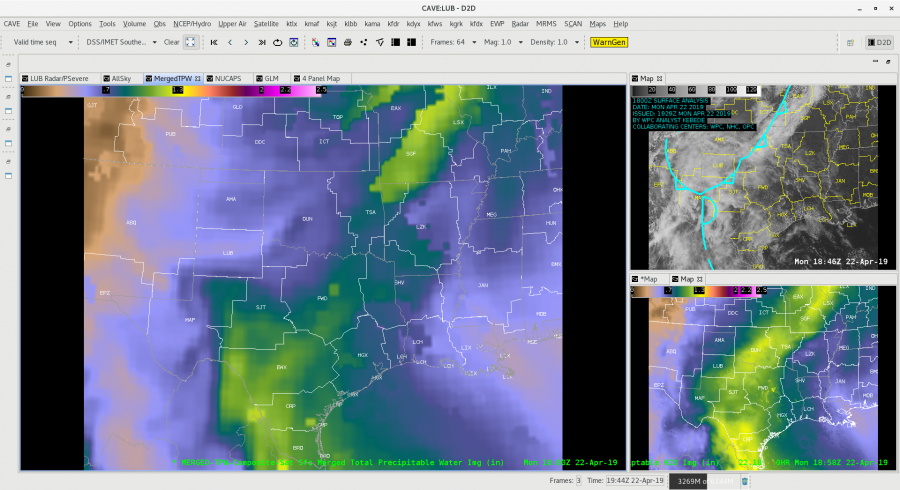