As was anticipated, isolated to scattered thunderstorms developed over northern and western portions of KS. This area will continue to be monitored for additional storm development, and intensification of ongoing convection as backed low level flow continues in this region. The image below shows composite reflectivity, MRMS mid level rotation tracks and MESH, reflectivity at -20 C and the HHC. This cluster of storms is gradually intensifying, and MESH has indicated the presence of severe hail. 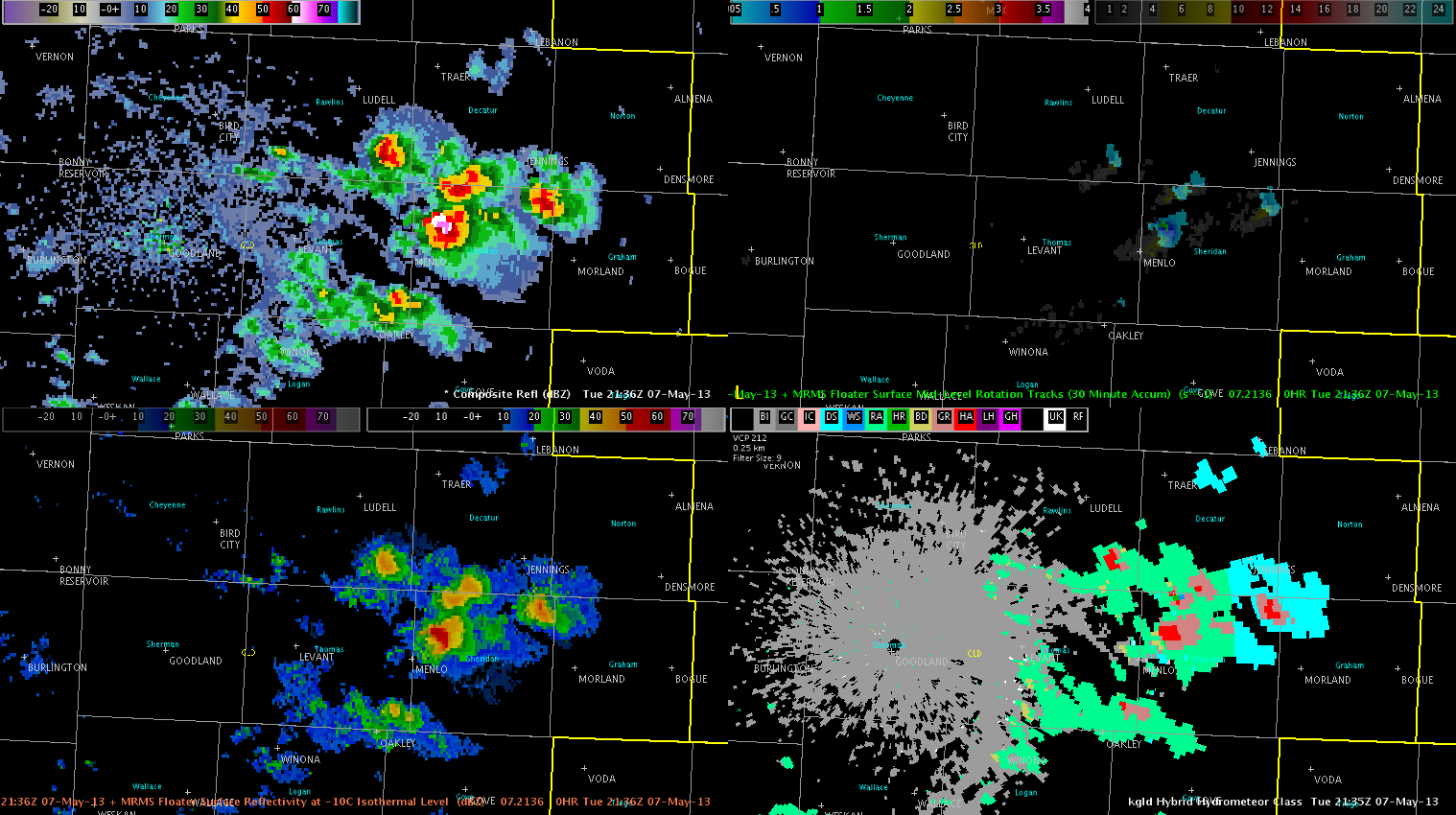 We are still monitoring CWAs further south, LUB in particular, for convective initiation in the next couple of hours. A large CU field has developed in the last hour and is showing some CI and CTC signals. 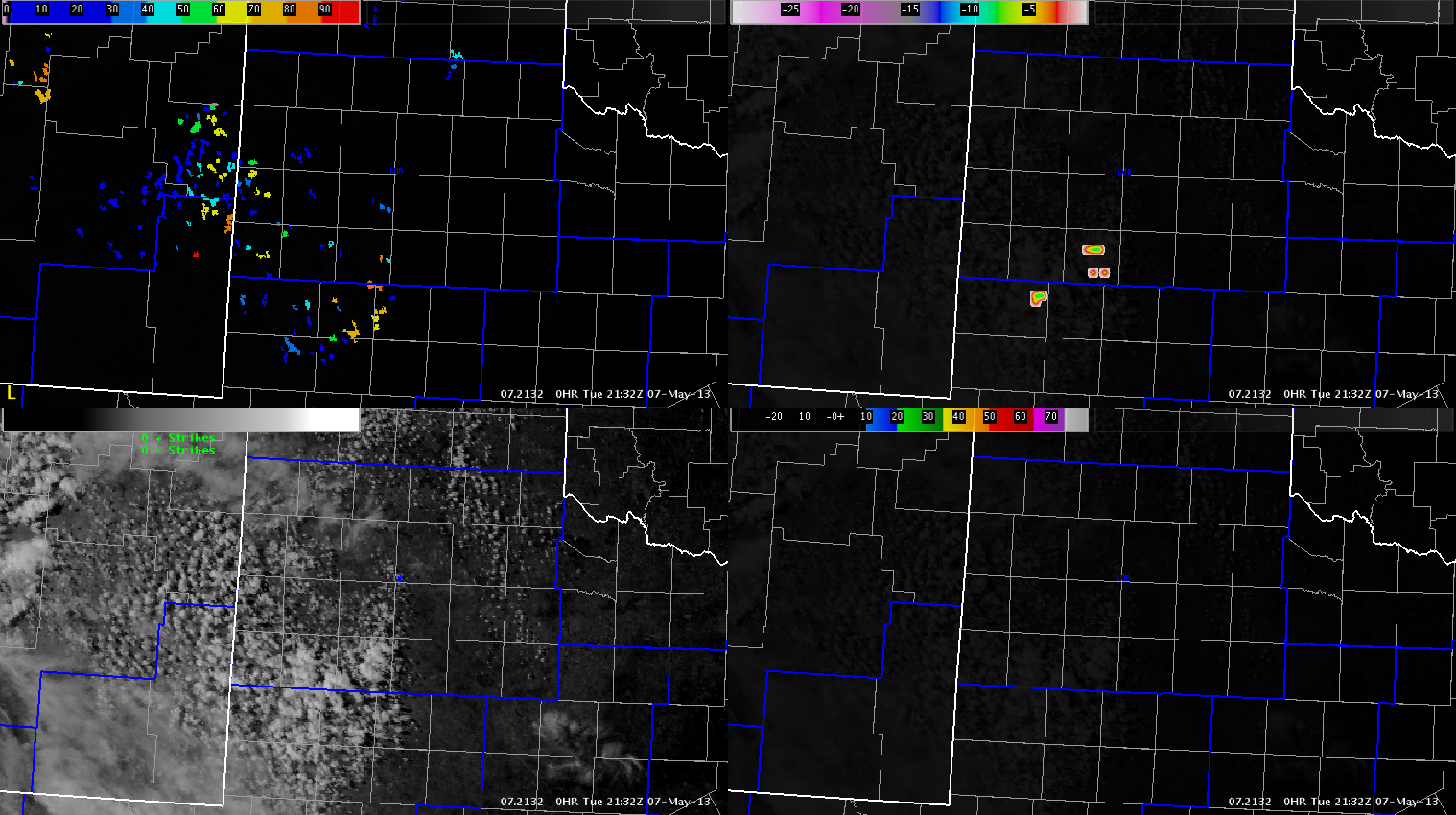 However, this activity has been slow to develop, and severe convection does not appear imminent.

Broad upper ridging resides over the Southern Plains, with cyclonic flow on both the east and west coasts. In the wake of large upper low currently positions over the Mid-Atlantic, robust moisture has struggled to return, yielding less than stellar severe parameters. Still, the presence of low to mid 50s dewpoints combined with favorable wind fields will yield a chance of a few severe storms, mainly in the form of high based multicell and supercell structures.

A subtle surface trough/boundary extended from the higher terrain of eastern Colorado eastward into western Kansas with a pronounced dryline over far western KS extending down into much of western and central TX. In the presence of appreciable daytime heating, these boundaries are expected to serve as a focus for convective development from now through around 22-23z. Greater storm coverage is expected further north, within area of backed surface flow near subtle trough/dryline intersection. This will correspond to the CWAs of DDC and GLD. Further south, increasing mid level heights will tend to limit convection, though isolated to widely scattered thunderstorms may develop by around 23z to 00z. Large hail, some very large, and damaging winds will be the primary hazards, with significant wind gusts possible due to inverted-V type soundings within meager low level moisture and deeply mixed atmosphere. Tornadoes do not appear to be much of a concern, but if one were to occur, it would be most likely nearer the backed winds over northern/western KS in GLDs forecast area, though lacking wind shear, both in the low levels and aloft, may tend to mitigate this potential.

Mesoscale models (WRF-ARW and WRF-NMM) are in good agreement in developing isolated to scattered supercells across much of western KS as can be seen below. Lesser activity can be noted in the TX panhandles and points southward. 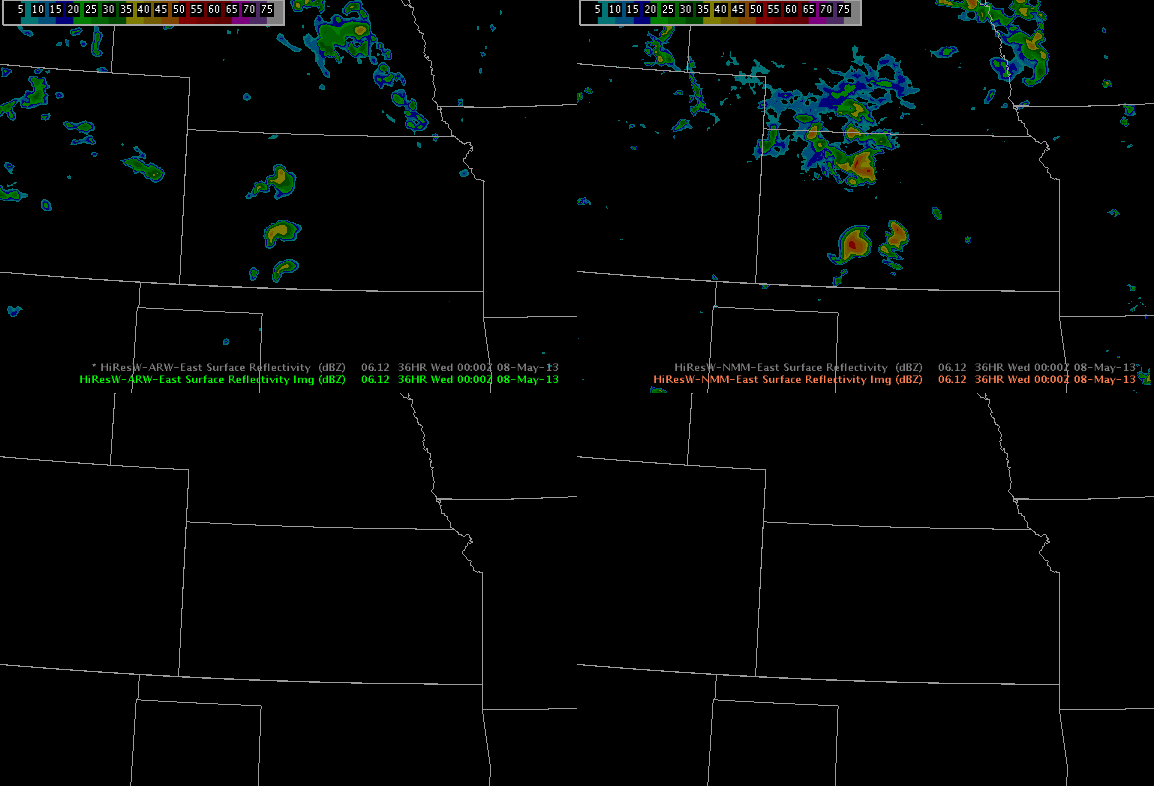 Likewise, CIRA NSSL WRF simulated IR satellite (upper left panel below) depicts thunderstorm development by around 21z over much of DDC/GLD/AMA CWAs. One difference it he more widespread nature of thunderstorms further south, which the above high res runs do not support. The OUNWRF simulated reflectivity (lower left panel) also supports this more active solution. Attm, it appears to be over convecting somewhat, especially considering lack of strongly backed sfc flow and increasing heights aloft. 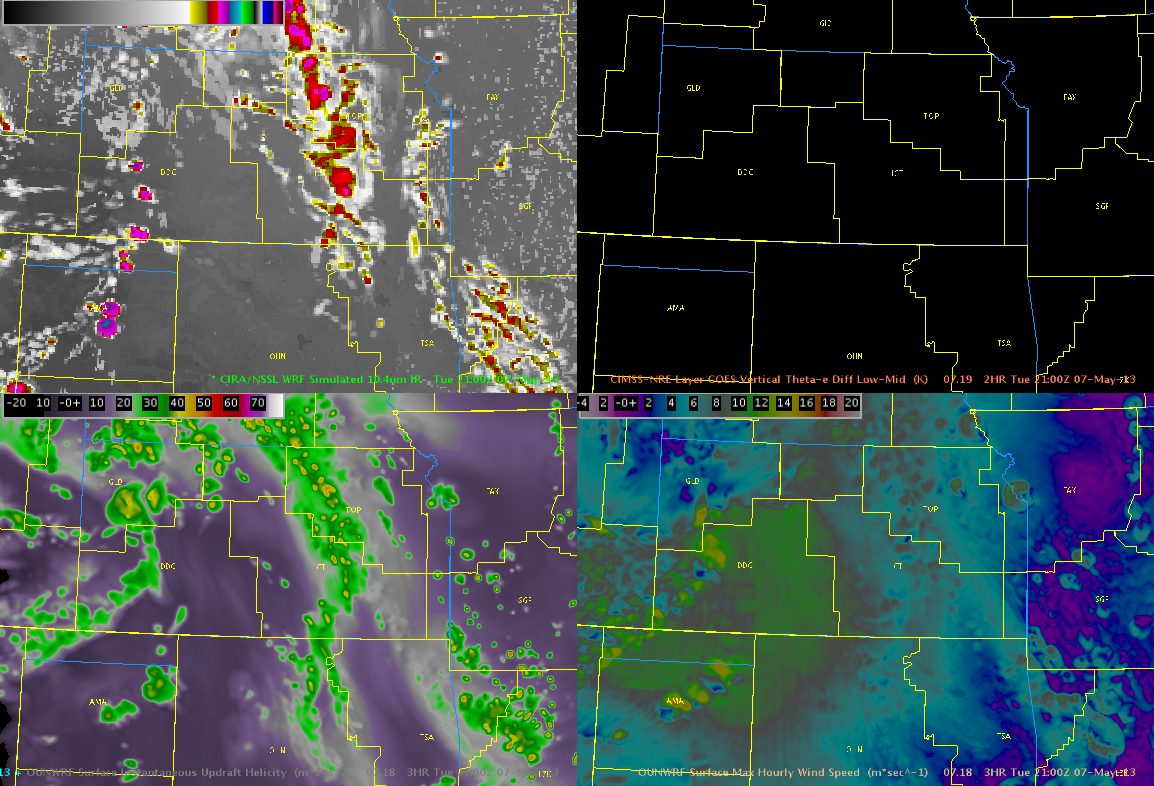 In the next few hours, storms are expected to develop first over west KS, then, in a more isolated nature, over parts of the TX panhandle and southwest TX. The CI product below has already shown areas of moderate to high CI potential within a line of agitated cumulus along the dryline and sfc trough, with a strong CI and instantaneous CTC signal over eastern CO. 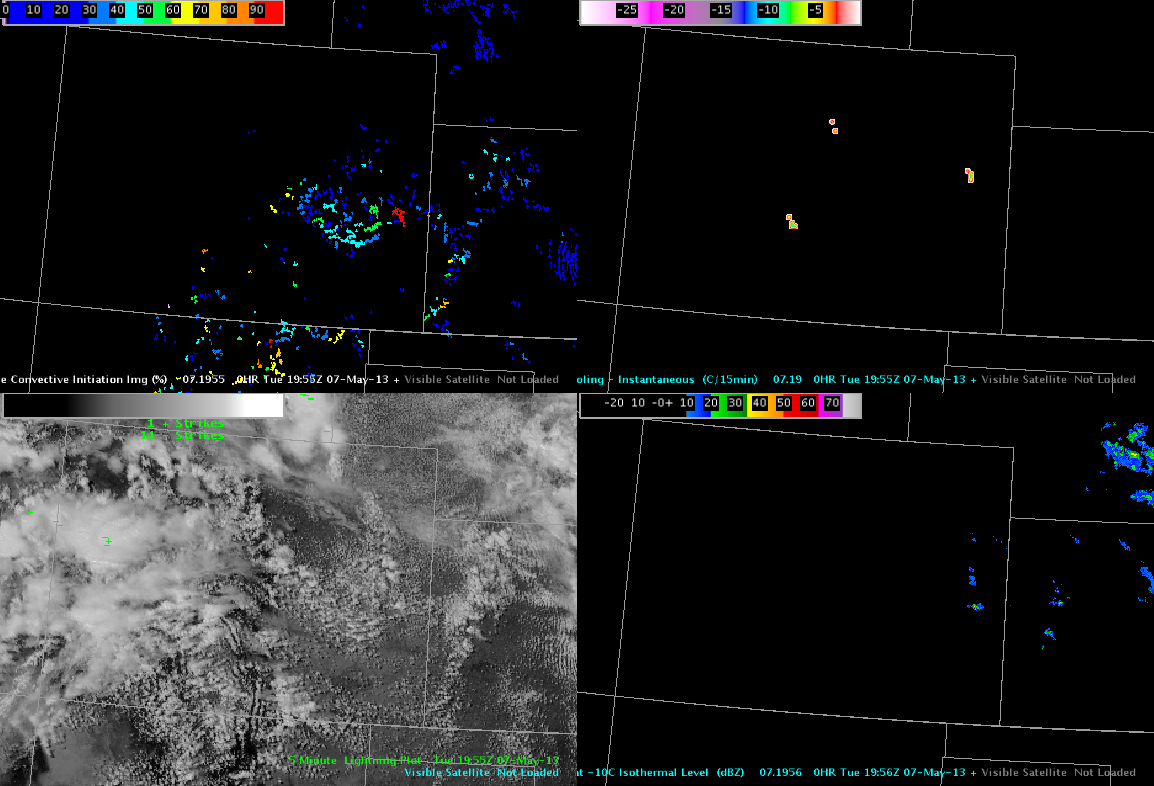 Initial thoughts are to set up shop in GLD and adjacent DDC this afternoon, with potential to migrate southward if more discrete activity develops along southern parts of the dryline. This meshes well with the EFP Severe Probabilities outlook shown below. We will keep a close on LUB late this afternoon and evening, especially in the case that we can  sample some of the PGLM capabilities within the LMA there.