Spectrum Width is (I feel) a seldom used and/or misunderstood product, but one of the uses of it is to view the leading edge of a gust front with messy reflectivity. I think the Az Shear product, especially the single radar version, adds an additional layer to this boundary identification. A forecaster would need to be aware where the radar is with respect to the leading edge as the Az Shear flips whether you are north or south of the radar, but putting the Velocity, SW, and Az Shear together makes that leading edge ID easy. This is important when doing DSS for events for example, identifying and timing out right where the leading edge winds begin. Below are two screenshots one with AzShear, Reflectivity, and SW, and another with AzShear, SW, and Velocity. You can see where the leading edge is in the most norther part of the line in reflectivity (tight gradient that lines up well with SW). In the middle of the reflectivity though it gets messy. While details of the leading edge are still visible in SW, they stand out well in the AzShear, including where a kink the line and a new circulation is developing. 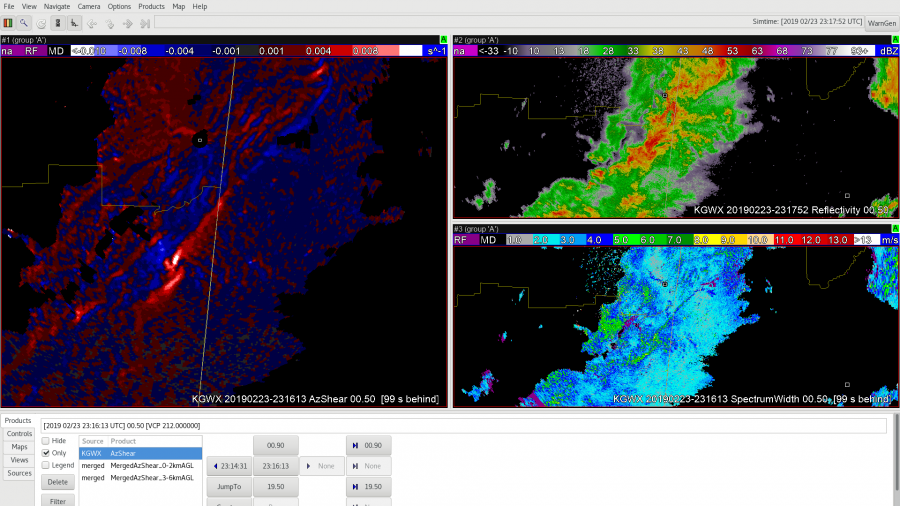 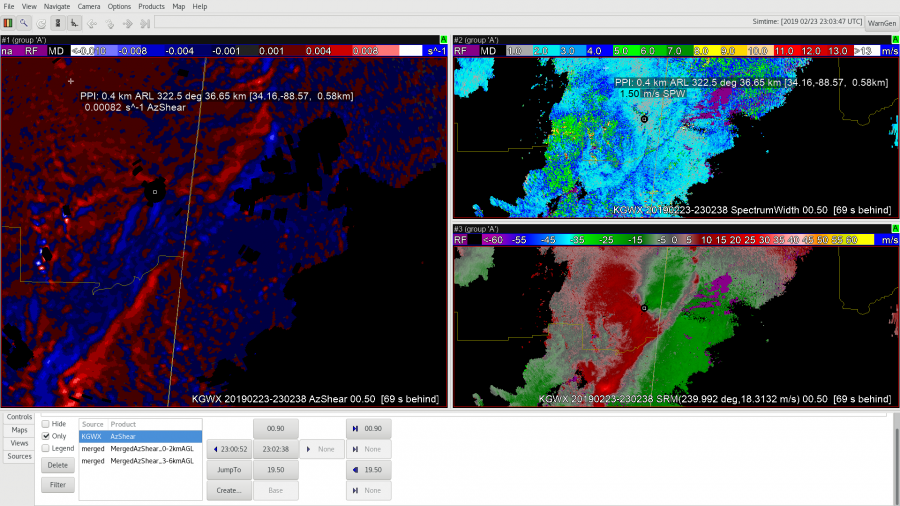 You can see this leading edge of the line in Storm Relative velocity as well (see above). Whether it is for tornadic circulation identification (which SW can also play a role in – high values of Spectrum Width = high turbulence like you’d see around a tight couplet) or for identification of the leading edge of the winds I think a 4 Panel of Reflectivity, Spectrum Width, Velocity, and Single Radar AzShear would be useful and valuable.

Now reference the zoomed in velocity: 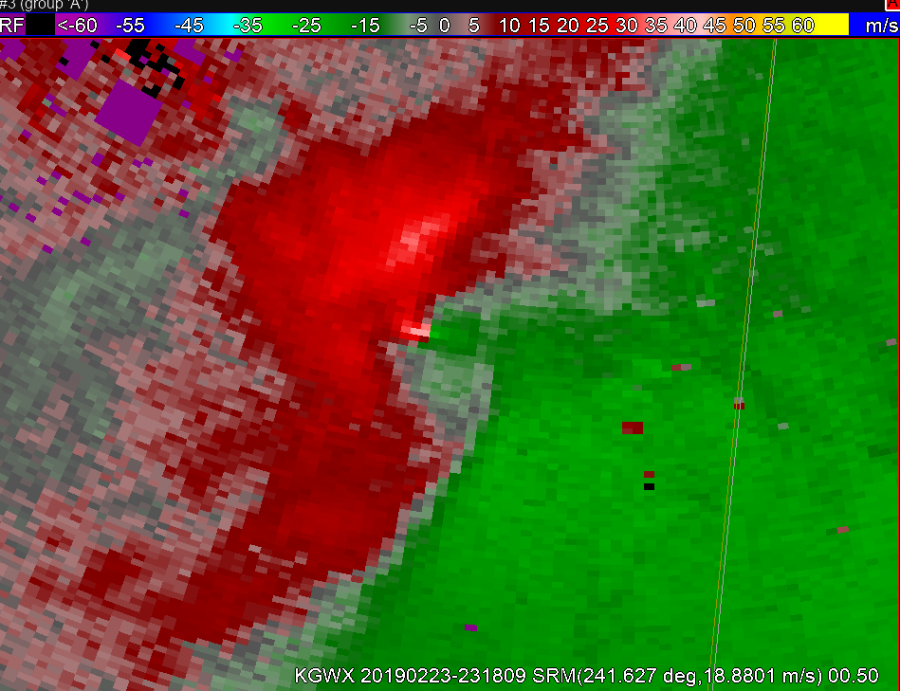 Additionally, the MergedAzShear products can alert you to couplets that are occurring at low-levels nearer to other radars than are currently being viewed. For example, in CWAs with multiple radars and with limited screen real-estate due to performance and monitor limitations, it is impossible to view all radars at once. Thus you find yourself switching tabs a lot. Utilizing the MergedAzShear can tell you when you need to look at a different radar and which radar you need to look at so you can triage a storm as fast as possible. See merged product: 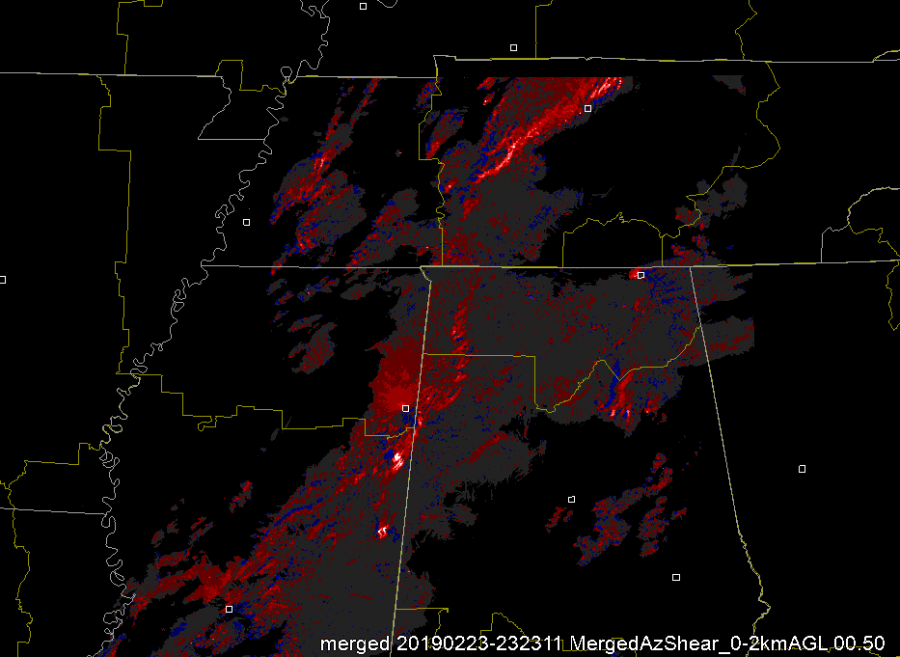 vs. a single RDA AzShear product: 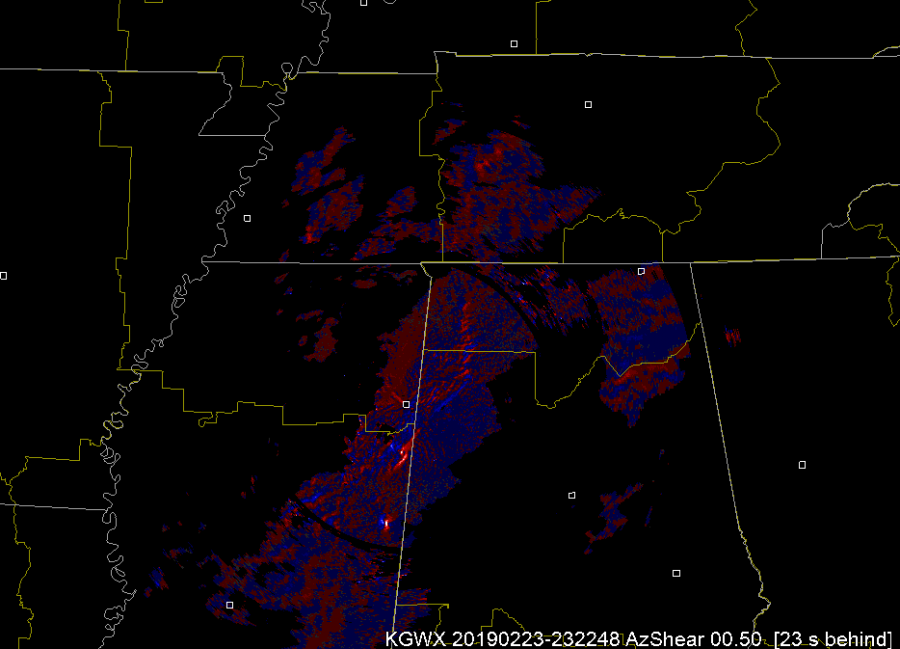 And note the detail you can see in northern AL and western TN. After addressing the storms in eastern MS, I know I need to switch and look at nrn AL.

Single radar AzShear appears to do a nice job of highlighting the FFD and especially the RFD right before and during what looks like a fairly significant tornado.

In this first image, the updraft-downdraft convergence zone appears to be a continuous line in AzShear.

In the second image, you can see the RFD kicking out ahead of the storm right as the velocity couplet intensifies and a TDS appears.

In image 3, it looks like the RFD has pushed well ahead of the tornado, perhaps hinting that the tornado may soon dissipate.

The TDS lingers in this image, but the velocity couplet has weakened.

Still have a TDS, but velocity couplet has become very weak.

Cellular vs Linear capabilities: Analysis of 20190223 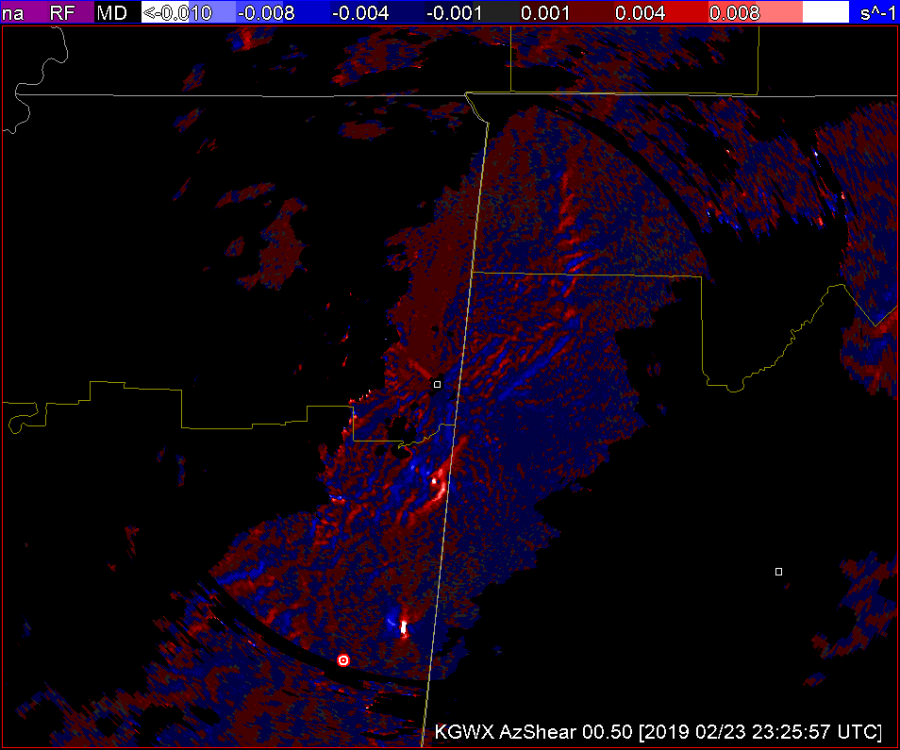 AzShear draws the eye very  nicely to cellular areas of concern. That, compared to the velocity pictured above in A narrows your attention to the two couplets located in the southern portion of the picture. The issue I see here is the AzShear pictured in C provides a bright spot in the couplet second from the bottom that catches my attention but also lends a broadness to the picture that is a little more difficult to read than the Velocity picture in A. (TDS embedded within.) This may be due to the color table. In totality it’s helpful to rely on the velocity picture that has gradient smoothing to make it more clear what you’re looking at.

1) can make detection of the updraft/downdraft convergence zone (UDCZ) quite clear.  By overlaying things like 0-3km shear, could use this to highlight areas of mesovort development.

2)  Storms with strongest rotation “pop”.   I would use this in my typical volumetric interpretation – likely into a 6 or 9pnl display with other base and dual pol variables.   Could also compare to the integrated 0-2km rotation tracks.

The NOT SO GOOD

With a 0-3km shear vector roughly SSW to NNE at 37kts (per 18z JAN sounding), I would expect to see mesovortex genesis along portions of the updraft-downdraft convergence zone oriented roughly E to W. There are 2 such portions along this QLCS, and the single radar AzShear does a nice job of highlighting these areas.