A large portion of the MKX CWA was included in a MDT severe risk, so by the start of the operational period, we had to assess the evolving severe threat spreading in from the west. Meanwhile, our DSS event was the Madison Jazz Festival, which entailed a focus specifically on south central Wisconsin. The PHS CAPE forecast appeared to be a noteworthy improvement from the CAPE fields on the SPC Mesoanalysis, along with the short-term forecast on that page.

Below are the 18z through 20z plots of MUCAPE, MUCIN and effective bulk shear from the SPC Mesoanalysis page. 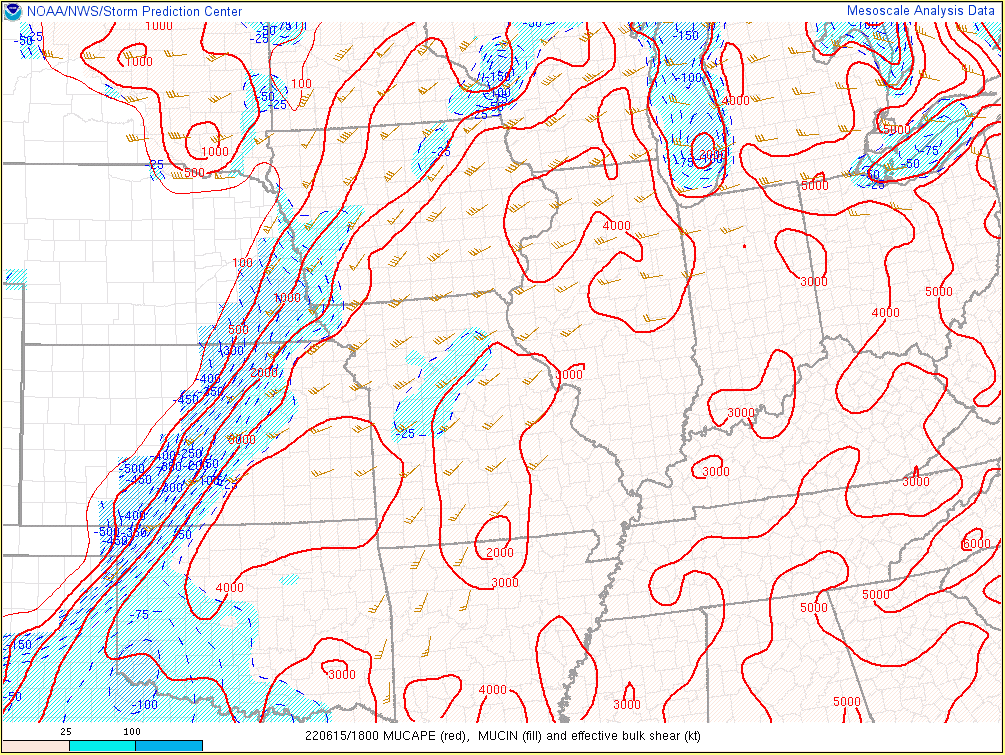 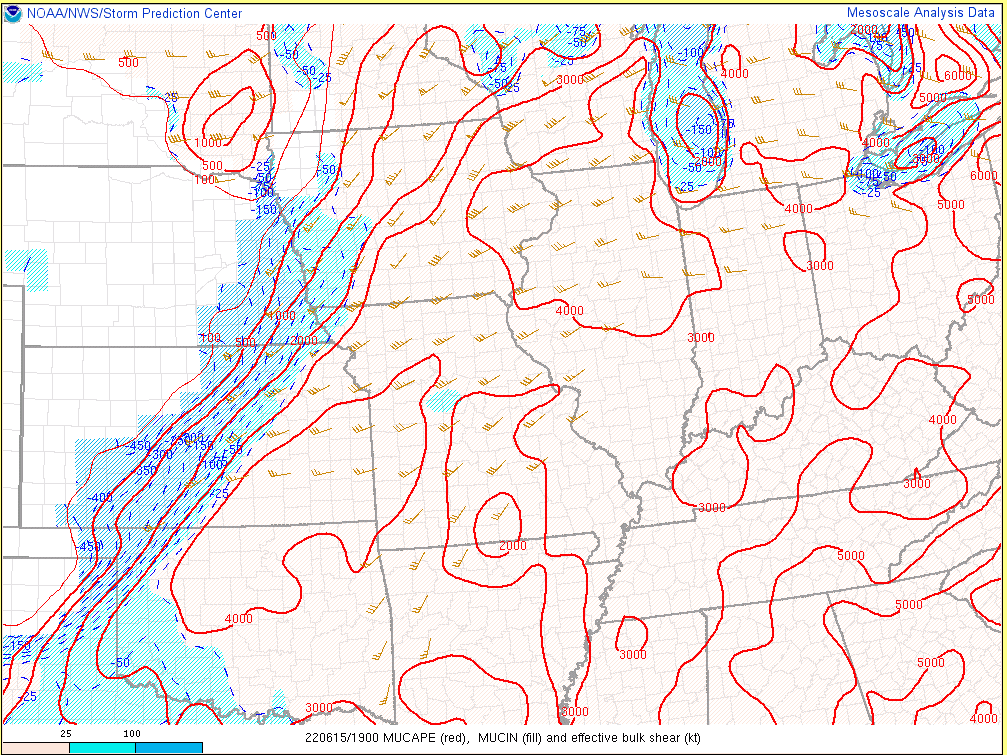 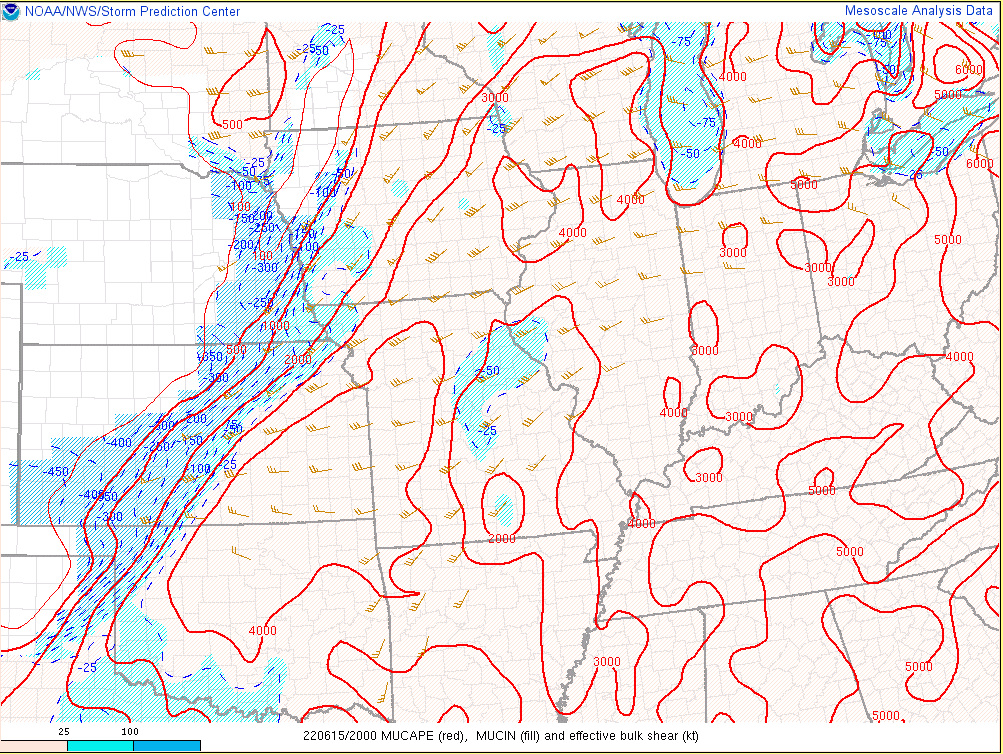 Compare the above images with 4000 J/kg of uncapped MUCAPE to the PHS MUCAPE initialization at 18z and 2-hour forecasts (19z and 20z) below. 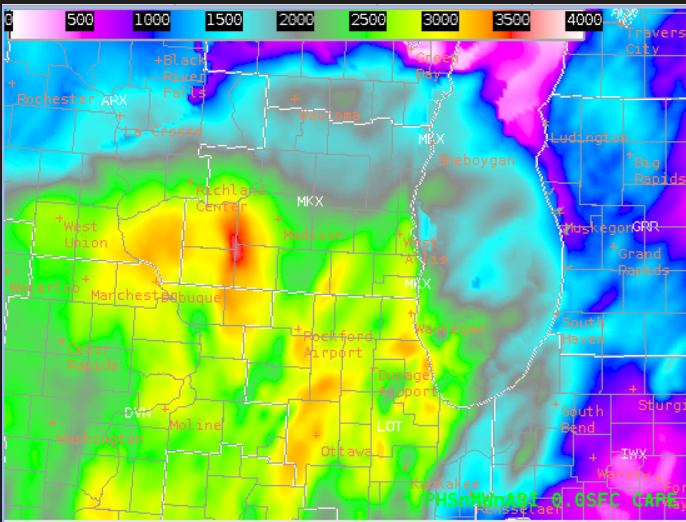 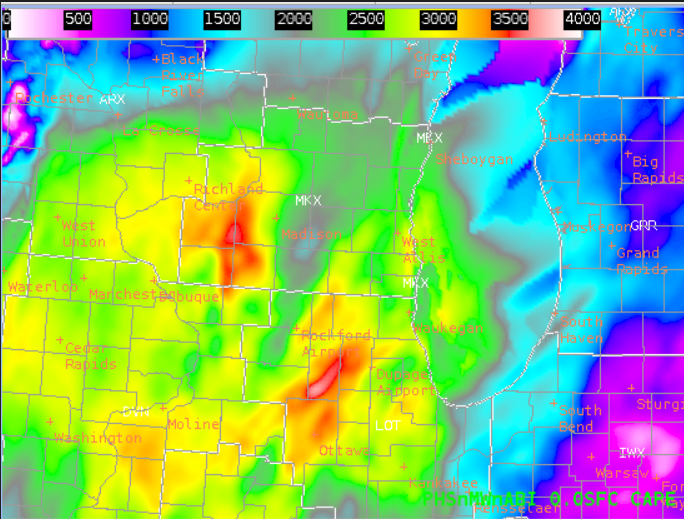 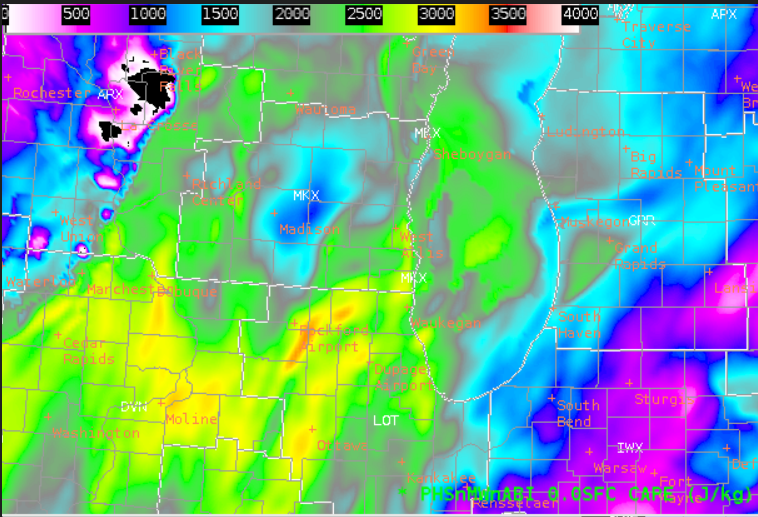 As you can see, while the SPC mesoanalysis was indicating 4,000 J/kg of uncapped MUCAPE, the PHS forecast showed CAPE decreasing across central and south central Wisconsin. This was an important and helpful piece of information for our DSS content for the Madison Jazz Festival.

The Day Cloud Phase RGB images below back up the PHS forecast vs the SPC mesoanalysis, as relatively flat Cu field over our area of interest actually dissipated between 20z and 22z. 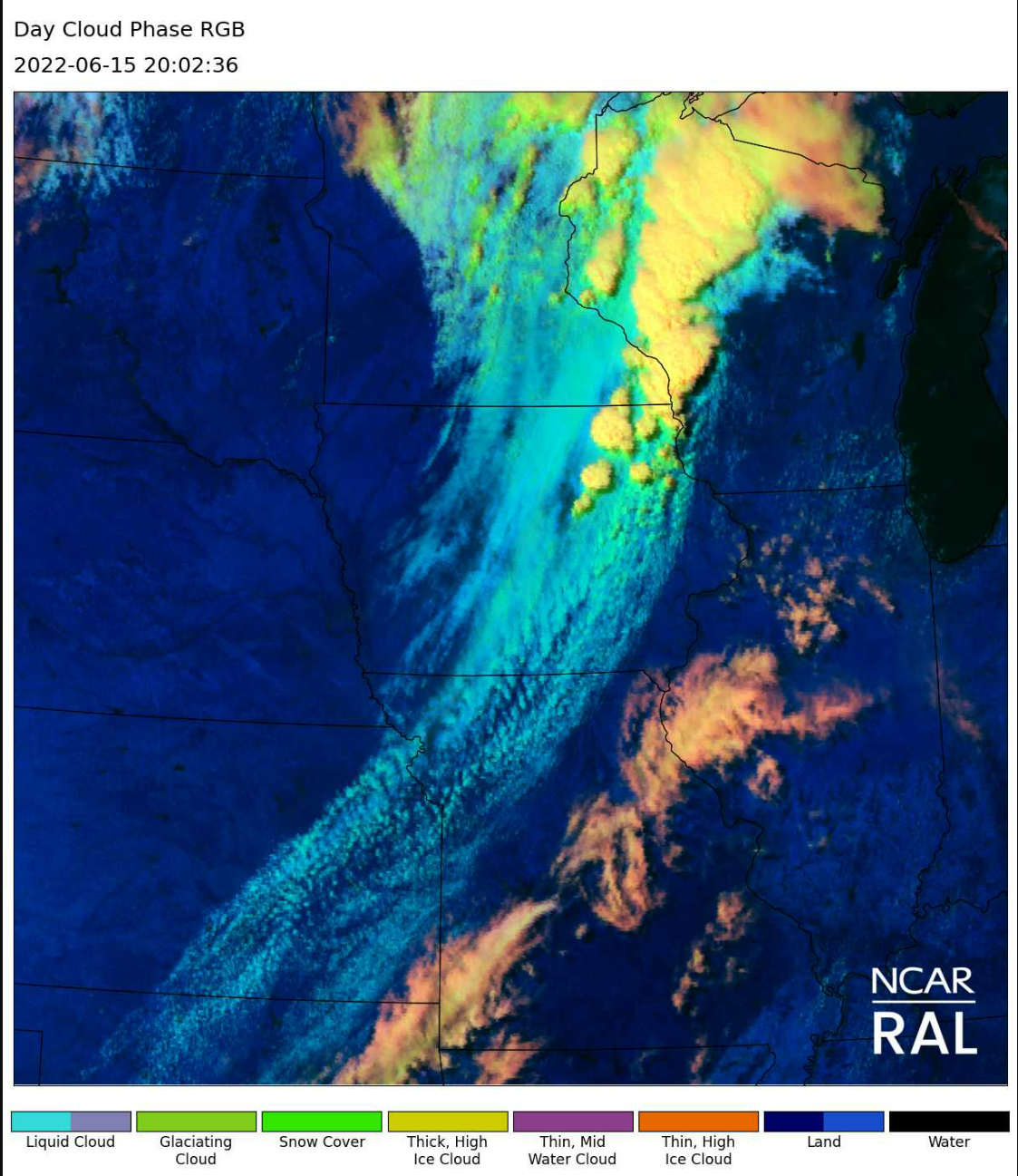 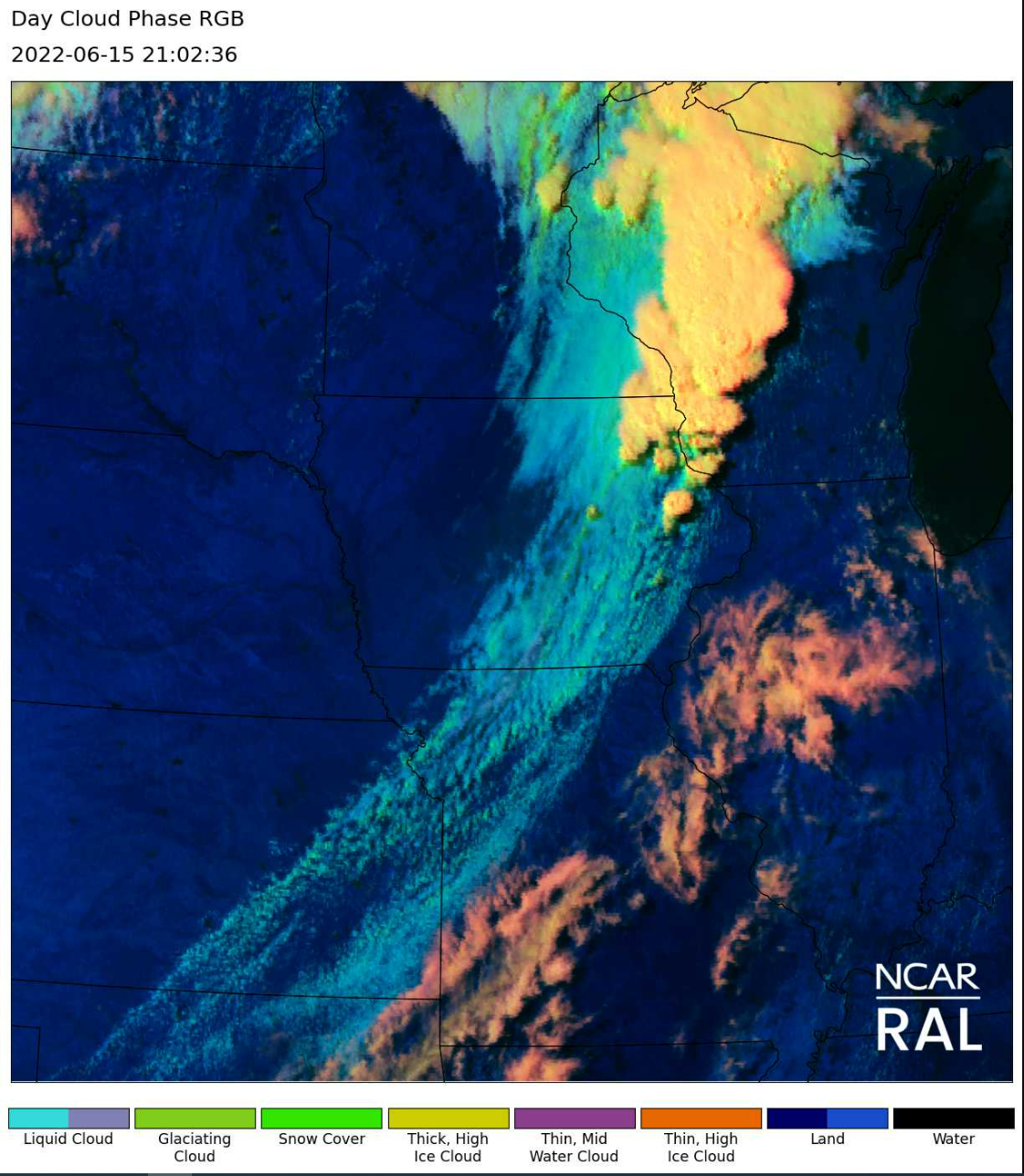 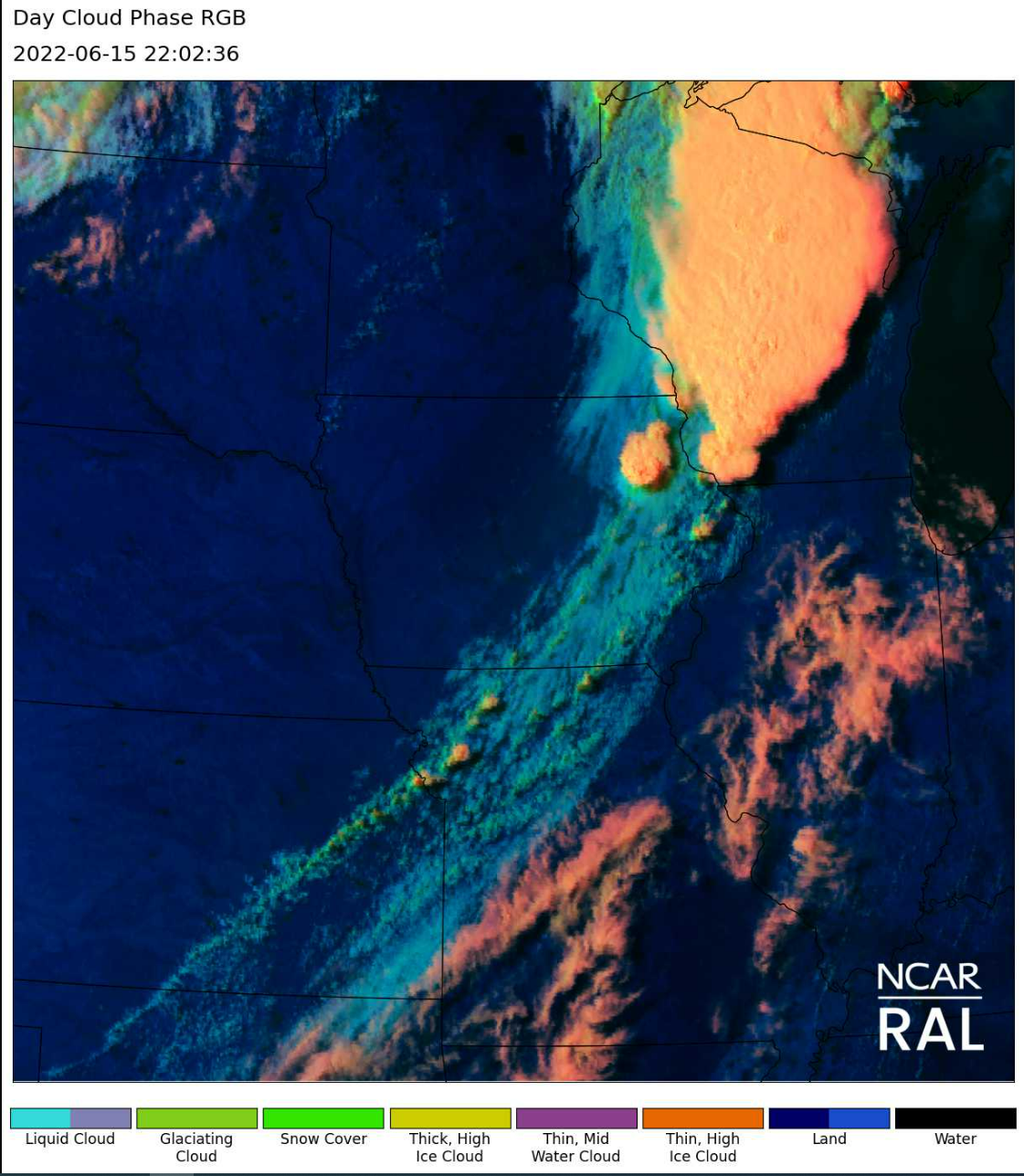 Based on the PHS forecast combined with satellite analysis, we were able to focus the convective threat for the Madison area toward 6PM and onward, tied to the stronger forcing and better moisture arriving from the west where the ongoing convection resided closer to the cold front. It appears that the PHS sampling of moisture in the column applied to the near-term forecast strongly outperformed the SPC/RAP Mesoanalysis model background and OA algorithm.

Differences between the LightningCast (LC) CONUS and LC Mesos

Note below the CONUS scale (1st image) and Mesos (Meso Sector 2 on 6/15) had a different depiction of the lightning probability over northeast Iowa at 1911z 22Jun15. This was due to the time for a CONUS GOES-East scan to complete, vs. the much shorter time for a Meso sector, which in turn affects the LightningCast model. This is something to keep in mind when using the product.

At 2106z, the ARX office had recently issued a Tornado Warning (2102z) for the northern cell with a high % on PSV3 and PTV3, per the noted superior calibration of the updated model vs. the V2. Could the PSV3 and PTV3 trend on this storm have assisted the radar operator in an increased lead time? As you can see below, starting at 2045z, there was a sharp upward trend in the ProbTor, to near 40% prior to 21z. At the least, this tool appears to be an excellent situational awareness tool, and may even be able to help lead time in some cases. It helped us in the MKX CWA regarding downstream warning issuances. In the event of an unexpected radar outage in a sparse radar coverage area, environmental analysis plus satellite interrogation with the utility of PSv3 could support successful radar warning ops in a less than ideal scenario.