The first few hours of the day was spent training Patrick Burke and Angelyn Kolodziej with an archived PAR case. As would a WFO participant would do, they provided feedback on the case, compared the output to KTLX data, and filled out a survey. At the same time, I was testing out new fixes on the gridded warning software. Most of the bugs have been resolved, but a few remain and seem attainable before actual operations begin next Monday.

Our Intensive Operations Period (IOP) went from 5-8pm. During this time, we collected PAR data on a non-tornadic supercell which developed about 20-30 miles south of Norman: 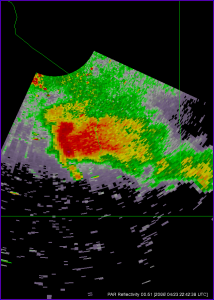 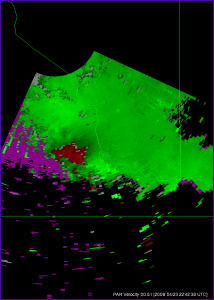 We also loosely operated the gridded warning project over a number of domains, including Central Oklahoma, one a supercell NE of Midland TX, and a large bow echo complex that moved from west of FTW into the DFW metroplex. During this time, I was still testing the software for various bugs, and found one remaining issue that appears we can have fixed soon. Mike Magsig and Patrick Burke operated the software during this time. After the IOP, we had a great discussion from Patrick’s warning forecaster perspective on how probabilities currently factor into his warning decision making. He will be adding his thoughts to this blog in the next day or two.

Storms developed along the “stationary” front in eastern OK and western and NW AR today, and we concentrated our gridded warning efforts on an IOP from 5-9pm.

Mike Magsig (WDTB) played the forecaster/evaluator role today for the gridded warning experiment and he spent considerable time issuing gridded warnings. From the technology standpoint, a change to the contour code to sync warning times to specific products was working, but there were some side effects that caused some partially drawn warnings to disappear before they could be finished and saved. From the science standpoint, Mike spent a lot of time concerned with how to define the initial threat areas in relation to various storm structure elements. This was his first time to actually issue gridded probabilistic warnings, and it was good to finally give him some experience given that many of the ideas behind the concepts were his. At a few times, the warning grids we saved were not actually representative of the meteorology as we were trying to hammer the software issues, so these portions of this case might be “flagged” if used in future evaluation.

Here’s several screen captures during one moment in time during the IOP.

Storms did not form within 150 km of Norman, and thus we did not have a concerted PAR data collection (i.e., no real-time evaluation), although the radar was running in “long-range” mode throughout today’s event.

The cap held in Oklahoma until just before sunset today, when the leading edge of a moisture surge, seen as a westward-moving boundary, collided with the dryline. A supercell developed in western Garvin County and tracked slowly eastward, calving off at least one significant left-split that raced off to the northeast. We tested out the gridded probabilistic warning software today on these two storms (the left- and right-moving pair). There were still a few issues with regarding to time syncing of the various products, and the current threat area grids are still sometimes missing from the one-minute grid updates. Otherwise, the new storm motion-tool worked well and I was able to keep up with the two storms with not much difficulty. I issued and maintained high probability hail warnings for each storm, as well as a very low-probability tornado warning on the right mover. Here are a few images taken from WDSSII.

We also ran the Phased Array Radar (PAR) in TSS mode (Temporal Sensitivity Study) during the life time of the storms. The storm was moving slow enough to afford us the option of collecting a “half sector” 45 degrees wide. An image: 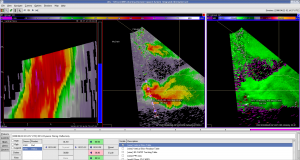 There were no CASA operations, as the storms were outside of the radar network.

Here is an image of the storm from outside of the NWC around 8 pm CDT: 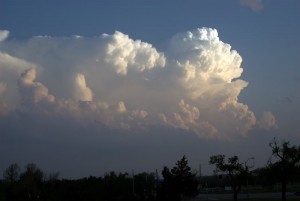 Also, we had the Situational Awareness Display (SAD) operating. Here’s an example of how this might look: 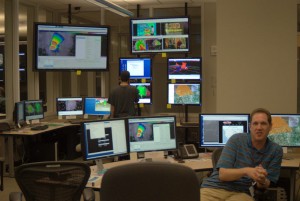