We didn’t have too many storms occur during operations today, but that allowed us to be able to focus more on CI.

Was able to use LightningCast for convective initiation today as LBF was waiting for storms to fire back up for the afternoon and evening. Initially we were thinking storms would form first over the southern portion of the CWA based off of modeled convective parameters but at 2101Z, a 25% chance of lightning popped up via LC for the north-central portion of the forecast area. This 25% contour appeared a few minutes before radar reflectivity started showing up for the same area. Seeing even the 10% contour show up earlier on, clued me into the fact that we needed to shift our focus further north than we originally thought. These storms seemed to be forming along a shear gradient and weak boundary.
Of note, I am using the parallax corrected LC.
LC, GLM FED, and DCPD at 2100Z 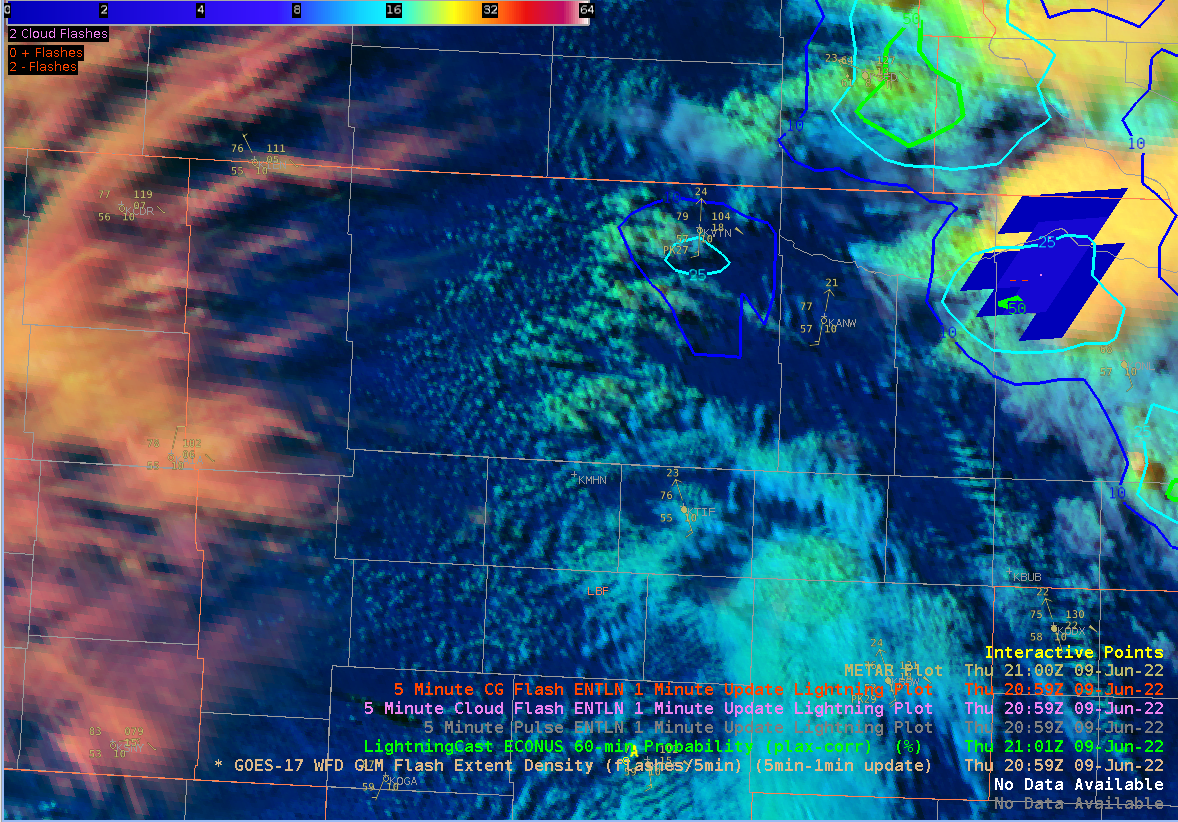 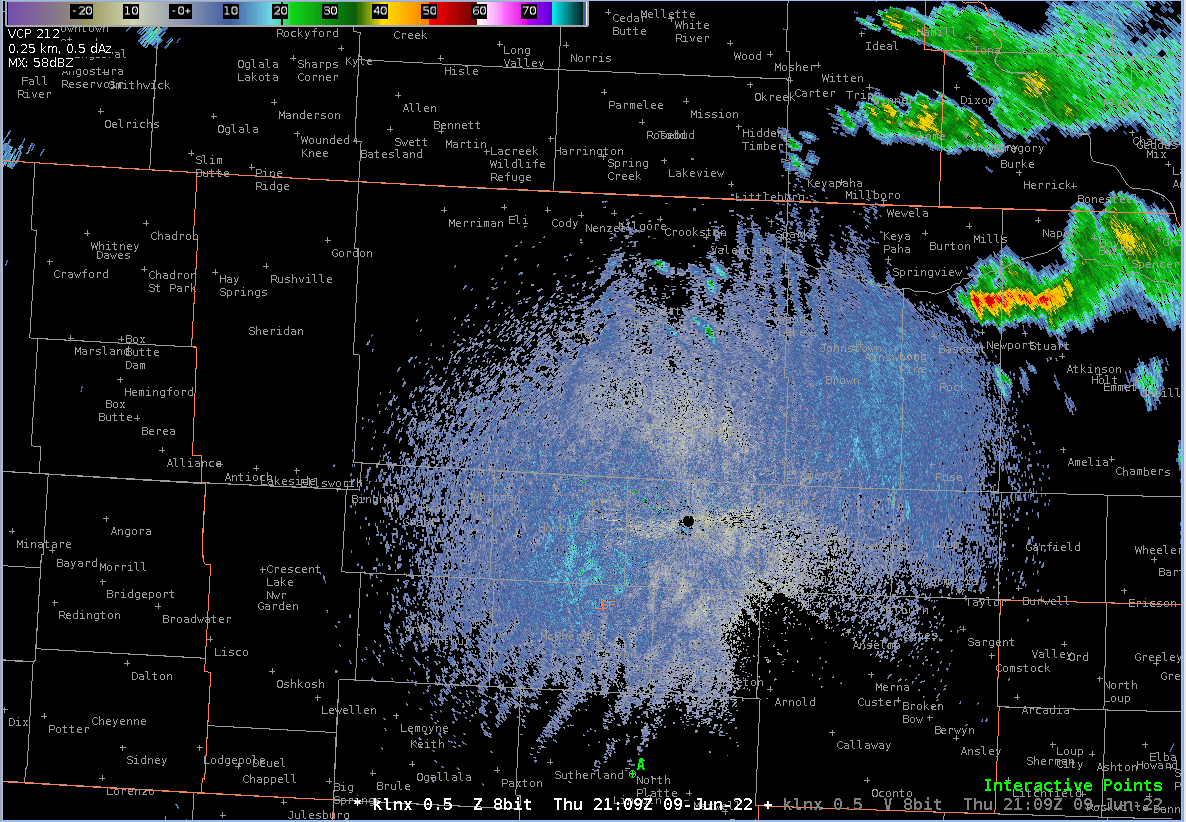 By 2116Z, both GLM and ENTLN showed the first flash of lightning, allowing for around 15 minutes of lead time off of the 25% contour. 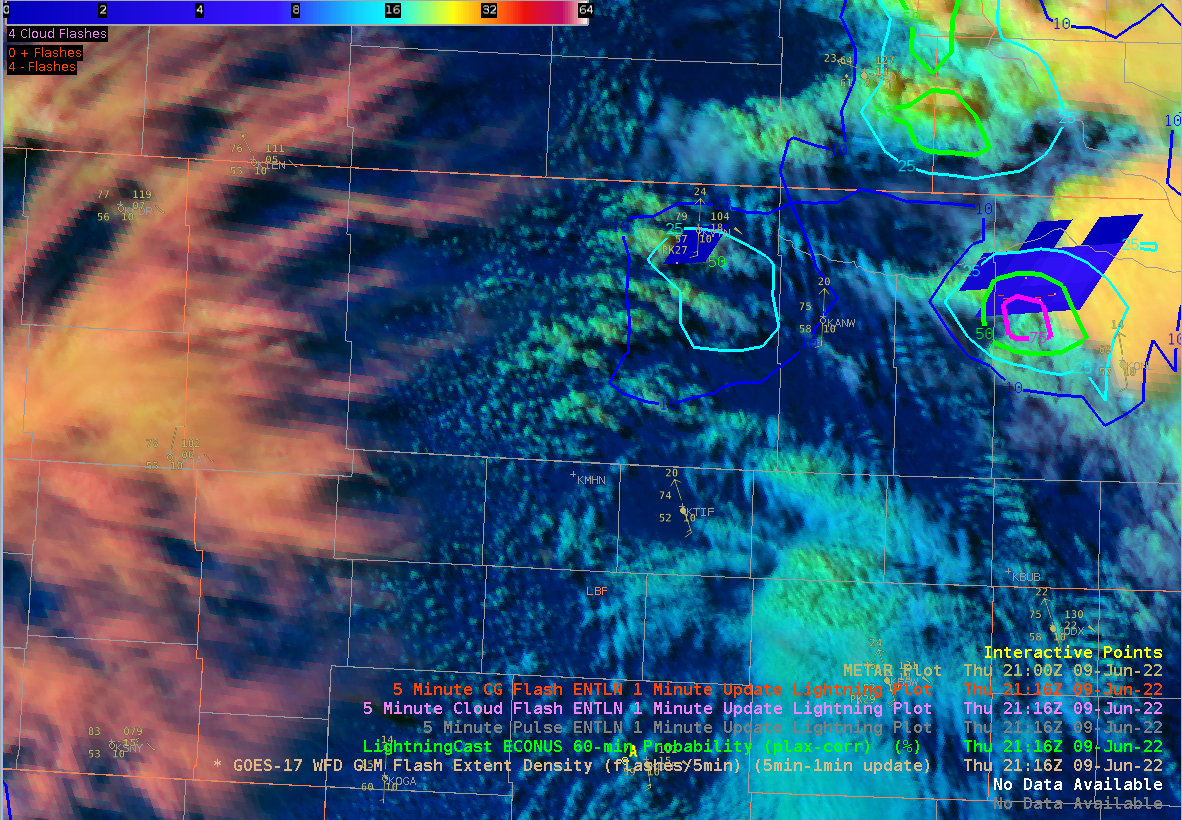 For comparison, these storms were forming ahead of the highest PHS CAPE and ahead of any of its stronger gradients.
21Z: 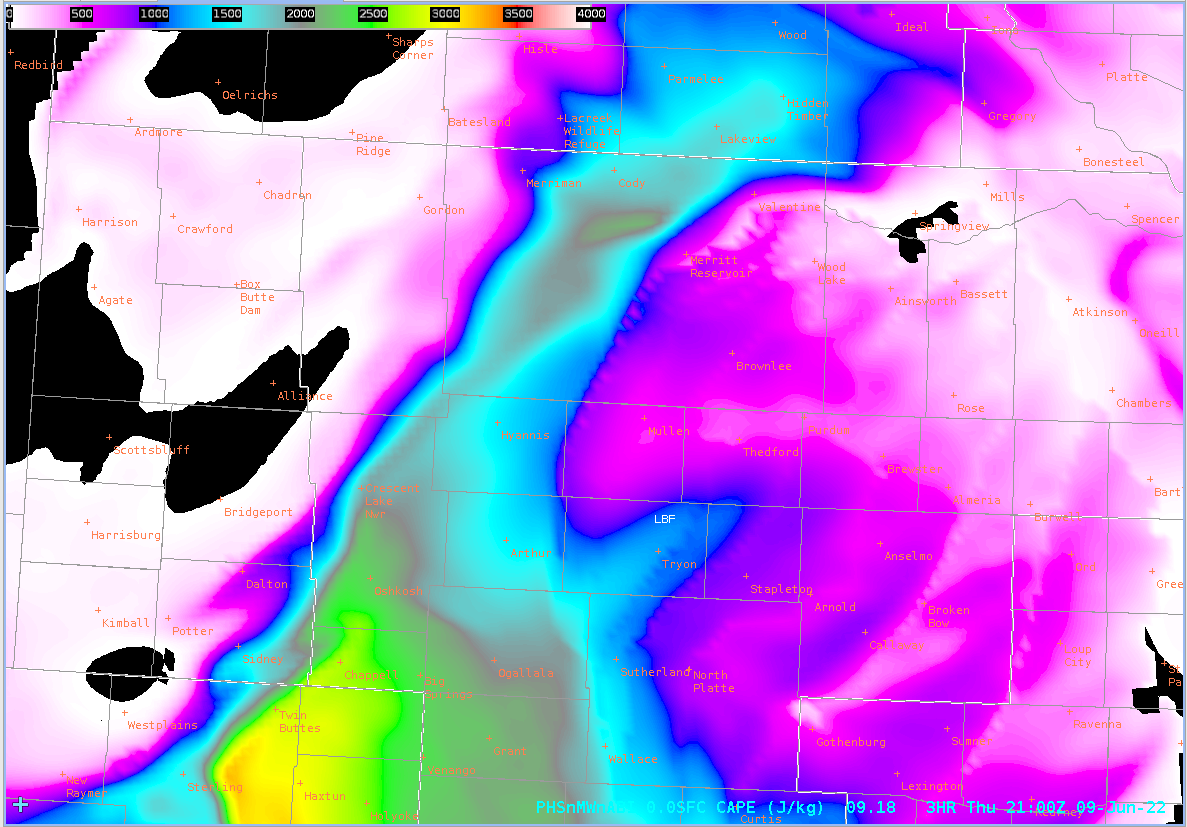 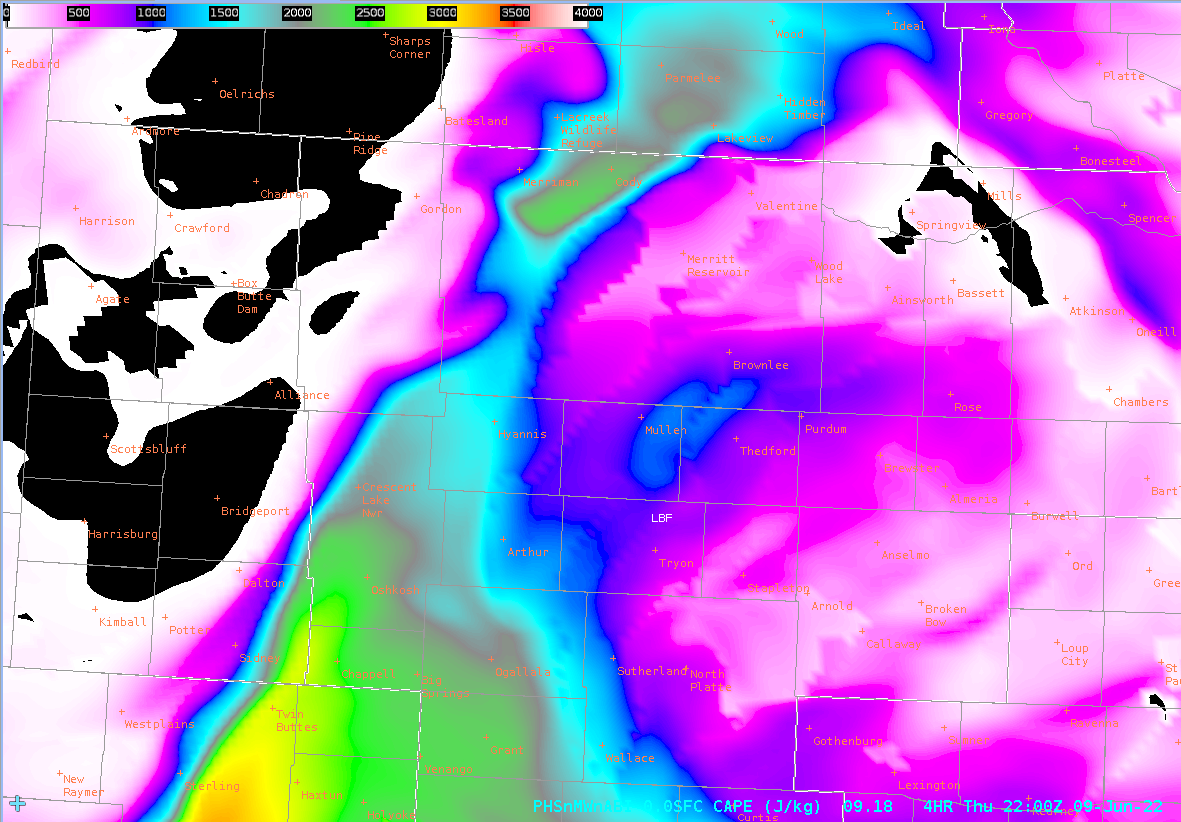 As our day was winding down, LC continued to indicate areas to watch before it showed up on radar, but I did not grab additional images.

Tried to compare NUCAPS soundings today as we did have an overlap, but unfortunately ran into technical issues within my CAVE so was not able to do much with it. Another limiting factor was that the only “green” soundings from Aqua within our CWA fell within the far western scans which we were told by one of the developers they would next expect good data from, being on the limb. But for comparison, here are Aqua (1911Z) and NOAA-20 (1953Z) sounding from points NW of North Platte. 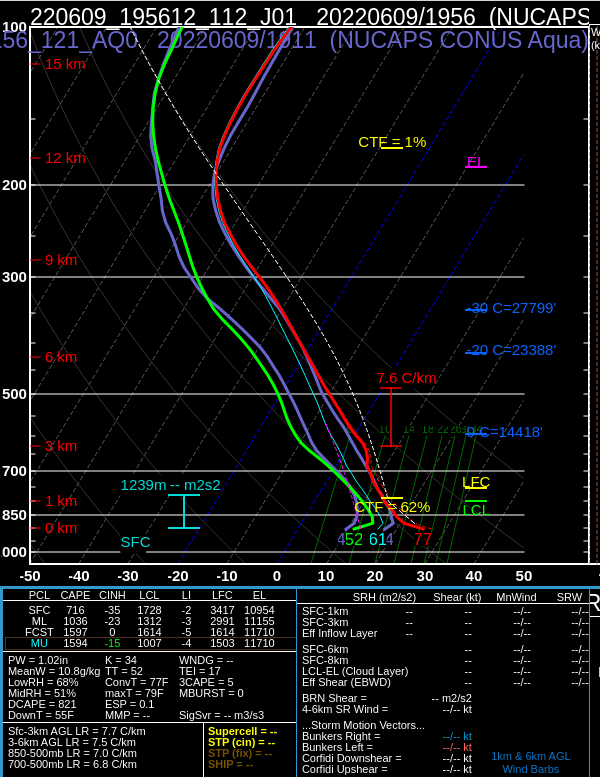 Points selected were both NW of the town of North Platte, circled below. The NE point of the two is Aqua and SW point is NOAA-20 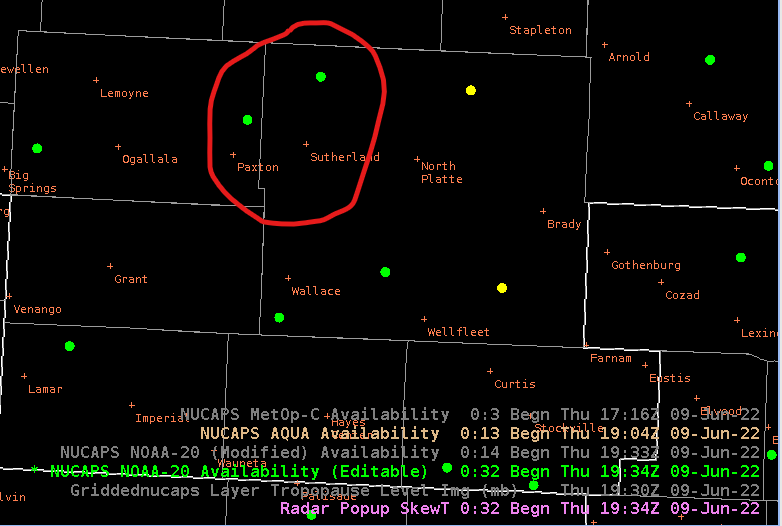