Interesting confirmation from the NTDA/NMDA Algorithms in the DMX Archived Review. An earlier Tornado Warning was in effect for a main ESE tracking supercell, with plenty of storm reports previously. Out ahead of this storm, a weak cell was approaching from the SW and was beginning to merge and cut off the necessary inflow to the already ongoing tornado in south-central Jasper County.

This brought forth an interesting situation. NMDA/NTDA algorithms were lining up but at low probabilities at 2034Z (NTDA 23.56%) which was enough to grab my attention. Since this entire event was tricky due to such an elevated storm environment (analyzing SRM/BV at atleast 3.1º and above), seeing the algorithms line up was enough confidence given to propose a new TOR for the southern part of the current polygon.

From here, NMDA began to show increasing trends which supported a visual interpretation of increasing cyclonic rotation in the mid levels.

Further increases in NTDA/NMDA along with increasing Vrot now in the lowest tilt (indicative of either a strengthening tornado or stretching/tightening of rotational velocity to the lowest levels) increased forecaster confidence in the decision of a warning.

This was a great illustration of both an early heads up, and a warning confirmation from both algorithms. Only mistake was not using the Bunkers Right Motion wind barbs to illustrate a tall enough updraft’s potential at a far right deviant motion (with a follow up warning clocked much more southeast to account for this motion)

A supercell tracked south of the ENX radar in the archive case. A particularly large hail core produced a TBSS to the south of the storm over the inflow region. This may have produced bad velocity data in the area of interest when examining the Meso/TDA detection. At 18:49Z, there was a high prob in the NTDA and the NMDA was colored in the 3 out of 4 range. But the values really jumped around within a few scans of that time. Possibly because of the TBSS signature. I found that the detection values were much more consistent with the supercell once it moved east and the TBSS was located away from the hook/inflow region. It was important to use nearby radars in this case to avoid the TBSS contamination.

A supercell formed along the squall line/QLCS moving through the Catskills and Sullivan County.  The circulation strengthened around 1925 UTC and continued through 1929 UTC  with a deep MESO detected through the lowest 5 tilts of the radar beam and around 100 nm from the KBGM RDA.  The probabilities for a tornado increased to ~60% with a strong inbound velocity and some outbound in terms of the mesocyclonic couplet.  The potential tornado was moving towards KMSV. The two images below show the cursor readout (0.5  DEG, 0.9 DEG, 1.3 DEG of SRM/REF data and 0-2 km Azimuthal shear).  The radar beam is up high, but I felt with a medium strength MESO and high Probs for a TOR from the NTDA that an upgrade from a SVR to a TOR was warranted. 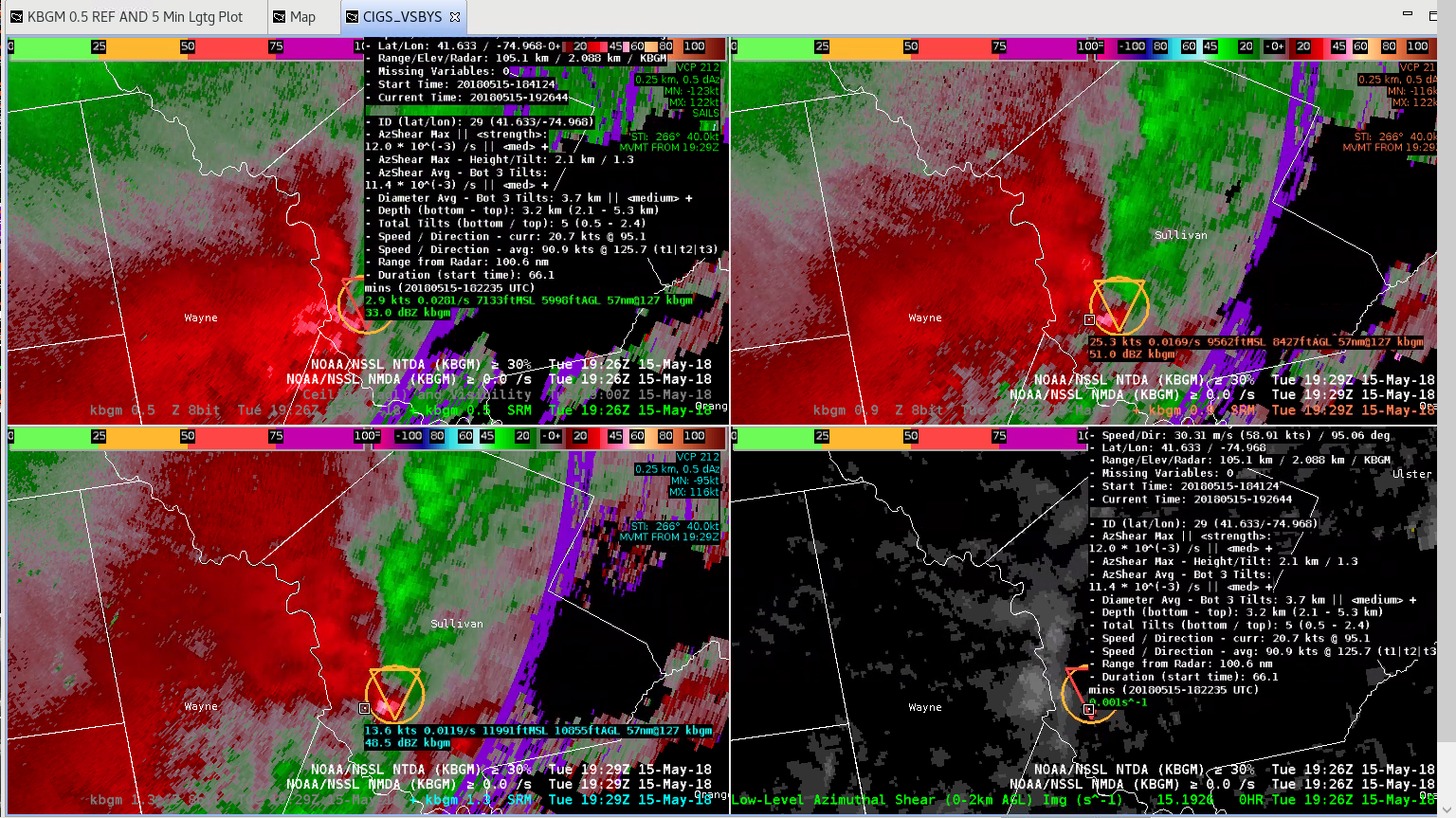 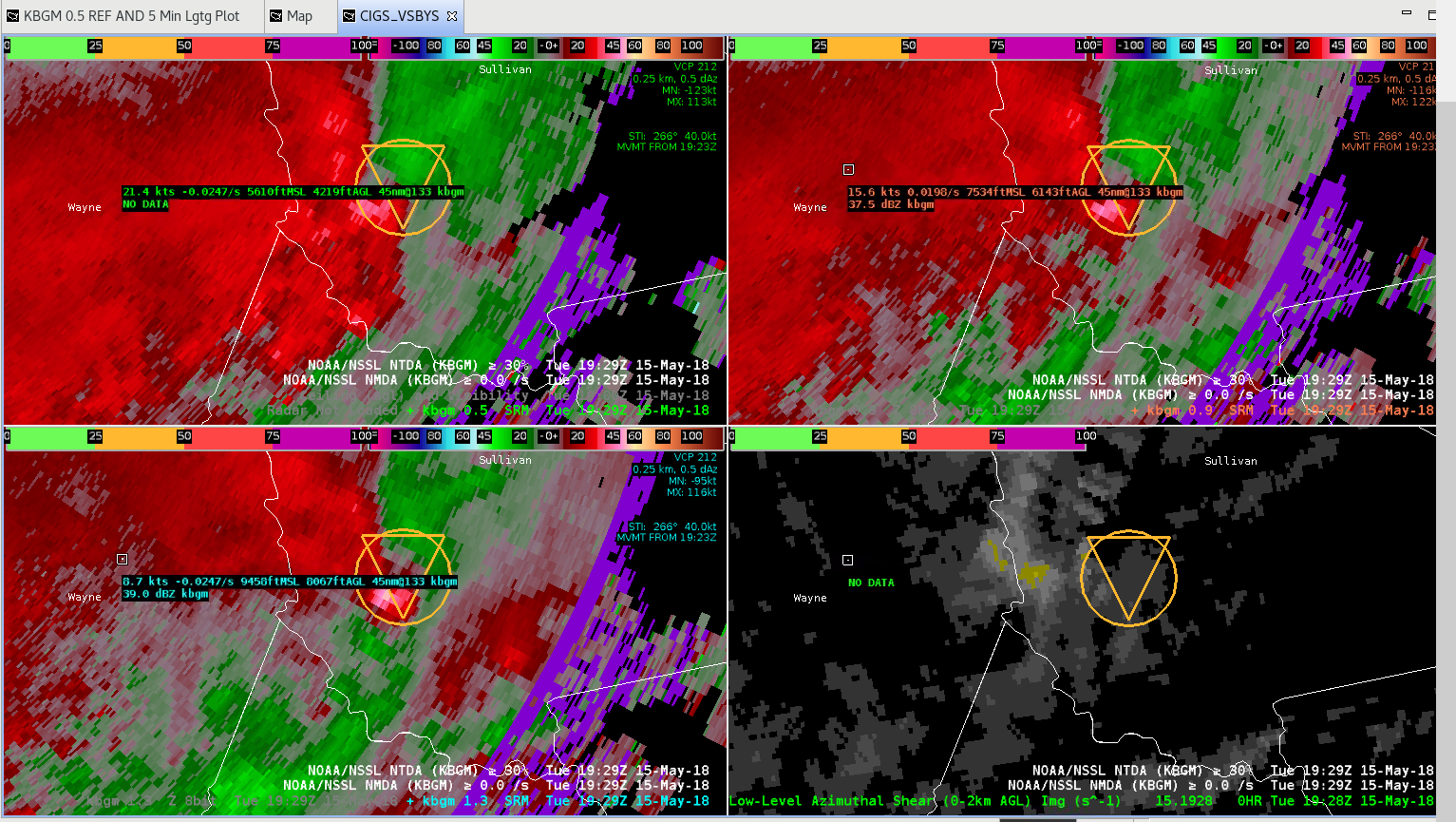 Interesting challenge in today’s Archived Case from WFO ALY. One particular challenge was the presence of Three Body Scatter Spikes (TBSS) present within the inflow region of supercells south of the RDA causing the radar beam to strike hail prior to the rotational signature. Since this phenomenon was more so identified on the lowest tilt, I did not witness any significant anomalously high probabilities from the algorithm, but it did identify a centralized area of rotation (see “stacking” of NMDA and NTDA in images below).

In the meantime, damage from a tornado was being reported in the lead (eastern) cell, which also had lower-end probabilities but within a more trustworthy region of velocity – owing to confidence in the warning. However, using meteorological “common sense” gave me the ability to take the western cell’s algorithm detection less seriously.

Is this a weakness or a strength in the algorithms? Depends on how you look at it. For the lead storm, I was a bit surprised on the lower probabilities, but for the western cell, it gave a prime example on the limitations that exist and where you, the forecaster, come in by having that situational awareness at hand to identify false signals.

Today’s case at EWX presented numerous challenges in a mixed case multicellular/linear convective environment. While closely monitoring for any potential local surges along an eastward surging line segment (already covered with a SVR/TOR POSSIBLE at the time), it was observed several NMDA and NTDA algorithms were lightning up along the front edge of the line.

At this time, I was closely monitoring for any local surges given 0-3km Bulk Shear reached 30-35kts, but the UDCZ (Updraft/Downdraft Convergence Zone) was not line-normal to the shear orientation, meaning it would take a local surge to possibly spin up requiring a proactive tornado warning decision.

This line segment was just west of the EWX RDA at the time, which presented some challenges along the leading edge of the line with ground clutter in an area of low power return causing erroneous velocity (as noted in very high SW).

This was an example of where applying situational awareness to each algorithm is necessary, and false signals can and will appear. This is where the trained eye comes in to further investigate using additional products/scans to gain confidence at what exactly is going on.

A convective complex near the EWX radar developed into a more linear system as it moved east of the RDA. Several low end NTDA detections were made along the line, generally where there were kinks in the velocity field. One detection did end up showing high probabilities of over 80% just north of Gonzales, Texas. This occurred on the northern end of a localized surge in the line. The NTDA peaked at  84% at 21:38Z and again at 82% at 21:42. There was broad rotation in both instances but not a particularly tight couplet. The center of the NTDA detection was over the inflow region of the storm. I’m not sure if this was a tracking issue or maybe I’m misunderstanding the way the polygon is placed . The NMDA showed an azShear Max of 0.0218 /s at 21:38Z but the AzShear Avg never rose above the 0.02 threshold. The NMDA and NTDA were occasionally not co-located.

I’ve overlaid 0-3km bulk shear vectors from the RAP on the screenshots below. The shear direction is nearly parallel to the line before the surge occurred which would not be favorable for tornadogenesis by the three ingredients method. Though there were other ingredients/nudgers that would support tornadic development.

KEWX radar was definitely the most active in the mid afternoon on Tuesday.  A QLCS segment formed along or just north of the city with initially multiple circulations along the line with 6 weak to modest NMDA circulations along the line. One circulation looked like a mesovortex on the leading edge along the line (Fig. 1).  The NTDA percentage shot up to 83-84%.  The NMDA was in the medium range with a “high” as AzShear max.  The total tilts from the bottom to top was 0.5-4.0 DEG (7 tilts).   It was at a decent range from the radar at 55 nm.  It definitely looked like a SVR was needed with a tornado tag.  I would have been tempted to issue aTOR.  A consistent time continuity of the MESO would have increased my confidence despite the “High” tornado probability.  The couplet was dominated by outbound velocities based on the SRM data (velocities > 60 kts).  It was nice that the NMDA and NTDA values were co-located. Also notice with the outflow a new cell fires (Fig. 2)  in the second image (SRM velocity data).  The circulation was narrow, compact and gate-gate in terms of the couplet velocities that the WFO KEWX office issued a TOR on that cell.

Was great to see the NTDA in action for marine areas! One particular shallow area of cells was approaching coastal Mississippi within the Mississippi Sound (generally south of Bay Saint Louis to Gulfport, MS. While some minor adjustments were necessary to allow NTDA to display for such weak rotational couplets (dropping NTDA probabilities down to around 10% was helpful in this specific case), there was rather consistent tracking with one small area of rotation.

Definitely small, but mighty. These small areas of rotation not rooted to a deeper mesocyclone can easily drop weak waterspouts in tropical environments (characterized by deep moisture and very low LCL heights on average). It was nice to see NTDA tracking this cell much more consistently than anticipated, with occasional peaks of higher probability reaching as high as 36.3% (as pictured above). A Special Marine Warning went in effect around this time to mention the potential for waterspouts as this cell neared land, but dissipated before making landfall. A great example at where NTDA can easily act as a warning nudger in low-end rotational velocity cases.

Good example to watch the quality of the velocity data…as it could lead to unrealistically high NMDA and NTDA.

Note the very high SW values in lower left hand corner. NTDA probs were near 87% with max/min velocity diff of 51kt. Granted this signature was nearly 100mi from the radar, with the center of the beam nearly 10K ft AGL…so probably not using this for warning decision…but it was still a good reminder for me to QC the velocity data and ask myself “does this make sense”.

Noticed the NMDA was detecting a meso, but only on the lowest 3 tilts (tough to see on screenshot, but lists the 0.5-1.3 tilts)

It looks like it could’ve gone up to at least the 3.1 tilt:

Thought it might be a lag, but even 30 min later it was still only showing lowest three tilts being used. Also thought maybe it was being filtered out due to low Z, but Z was actually higher with height. Interesting situation as to why NMDA wasn’t using higher tilts, even though base velocity suggested suggested it should be.