Our quest for knowledge leads us to outer space and the depths of the ocean using spacecraft, ships and submarines. Flatbed trucks, mini-vans, and converted ambulances generally do not inspire one to think of epic scientific journeys. However, this spring, an armada of land-based research vehicles embarked on a historic expedition in the Great Plains to collect clues about the mysteries behind tornadoes.

More than 100 researchers and students assembled the largest collection of cutting-edge weather equipment in history for the NOAA and National Science Foundation-sponsored Verification of the Origins of Rotation in Tornadoes Experiment 2009-2010, or VORTEX2. Their mission was to cast a net of weather instruments around and under rotating thunderstorms in hopes of catching a tornado as it formed.

The fieldwork arm of VORTEX2 is now complete and the hard work of data analysis is underway.

Why are Scientists All Spun Up About Tornadoes?

Like space and the sea, much of the atmosphere remains a mystery. A thunderstorm can be a massive monster climbing miles into the sky and stretching hundreds of miles across the land. How does such a beast begin to rotate? What causes it to concentrate its energy into a spinning whirlwind a fraction of the size of its source? What draws the funnel to the ground to destroy and, moments later, causes it to recoil upwards into the atmosphere? These questions are what drive researchers to solve the mysteries behind tornadoes.

VORTEX2 was designed so researchers could observe all the scales of motion from the thunderstorm down to the tornado.

One use of VORTEX2 data will be to develop computer models that are so specific they can predict the behavior of individual thunderstorms and ultimately tornadoes.

“What VORTEX2 is trying to do is extend tornado warning lead times from the current 13 minute average to 30-50 minutes,” said Lou Wicker, also a VORTEX2 Steering Committee member and NSSL scientist.

VORTEX2’s modern day explorers roamed across nine states over a five-week period in the spring of 2009 and another six weeks in 2010. The nomadic fleet included 10 mobile radars, a remote control aircraft, weather balloons, instrumented vehicles, and vehicles equipped to drop instruments in the path of a storm.

“The daily search for tornadoes was relentless, sometimes driving more than 500 miles during a single mission,” said Sean Waugh, University of Oklahoma student working at NSSL and on VORTEX2.  “Many vehicles in the project logged more than 25,000 miles.”

Reflecting Back on a Whirlwind of a Research Tour

VORTEX2 teams have been home for almost two months now.  Finally, there is time to reflect on the data collection phase of the project.

“Last year, we only got one [tornado], but the one we got was a very good one – a significant tornado,” said Burgess. “We encountered quite a number of smaller, short-lived tornadoes this year,” he added.

In total, VORTEX2 researchers gathered data on at least 30 rotating thunderstorms (known as supercells) and 20 weak or short-lived tornadoes this year.

“These [smaller, short-lived tornadoes] are the most prevalent type of tornadic activity,” said Wicker. “And, they are the most difficult to forecast, detect and issue warnings for.”

Analysis of the vast amounts of data takes time, but its time well spent.

“We’ll be looking at this data for five to 10 years,” Wicker said. “Two years from now we’re going to have a much better feel for what we’re going to learn from this experiment.”

NSSL’s Dusan Zrnic was awarded the 2010 Technology Transfer Award by NOAA for “developing a novel way to measure linear orthogonal polarimetric variables without a switch that was patented and transferred to the private sector producing significant savings in the implementation of commercial dual polarization radars.”

“The key is that on transmission, we can combine two electric fields – one is the field at horizontal polarization the other vertical. On reception, the two fields are automatically separated back into the horizontal and vertical polarizations and we can obtain the most important polarimetric variables,” explains Zrnic.  “Another benefit besides significant cost savings is that all the algorithms developed for the WSR-88D can run without having to retrofit or reprogram the radar to use the technique.

The NOAA Technology Transfer Award recognizes technology that is developed within NOAA and transferred outside the bureau to American industry or business, universities, state or local governments, or other non-Federal parties.

These esteemed award recipients will be honored at a ceremony to be held in the NOAA Auditorium in Silver Spring, Maryland on Thursday, October 28, 2010. 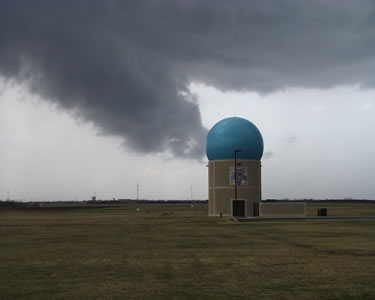 The paper can be found here:  http://www.nssl.noaa.gov/projects/pardemo/

This same paper was selected as a 2009 Outstanding Scientific Paper Award from NOAA’s Office of Oceanic and Atmospheric Research.

The purpose of the prestigious Professor Dr. Vilho Vaisala Award is to encourage and stimulate interest in research in the field of instruments and methods of observation in support of WMO Programs.  The award was established in 1985, and is granted on a biennial basis.

Heinselman presented the research during the World Meteorological Organization Technical Conference on Meteorological and Environmental Instruments and Methods of Observation in Helsinki, Finland at the beginning of September.  Heinselman, along with Adams and Priegnitz were on hand to receive a diploma and a medal on behalf of the team.

The collaborative Coastal and Inland-Flooding Observation and Warning Project (CI-FLOW) released a new video demonstrating how their prototype total water level simulation system can help improve NWS flood forecasting and save lives of people residing and working in coastal watersheds.

The video can be seen at:  http://www.youtube.com/watch?v=J276vYNcyxA&feature=youtu.be&hd=1

Currently, there is no framework that exchanges information between atmospheric, river, and ocean modeling systems to help forecasters predict the individual elements of a coastal storm including precipitation, ocean waves, tidal fluctuations, storm surge and river flows.

This problem is being addressed by the CI-FLOW project with a prototype system to integrate these different modeling systems to produce total water level simulations that account for river flow, tides, waves, and storm surge for coastal North Carolina.

“We were used to thinking about a hurricane being a wind event.  We had no idea we were going to have a flood,” he reflected.  “We weren’t able to predict it.  We didn’t know that water was going to be coming in up the rivers, we didn’t know how much rain was falling.”

As a hurricane approaches the land, heavy rainfall covers the area.  Excessive run off causes rivers to rise.  Fierce winds can push ocean water upstream.  When rivers meet the ocean waters, massive flooding can occur.  CI-FLOW is intended to help communities become more resilient by providing information to help individuals make better decisions so they can respond and recover from the hazards of local storms.

CI-FLOW researchers hope to give the integrated total water level prediction system its first real-time test during the 2010 hurricane season, and will watch with interest as NOAA updates the Atlantic hurricane season outlook this Thursday. This scheduled update coincides with the approaching historical peak of the hurricane season.

The NOAA National Severe Storms Laboratory (NSSL) deployed a mobile radar near Durango, Colorado, during the month of August to collect data on thunderstorm rainfall and resulting flash flooding.  The deployment was part of the collaborative “Southwest Colorado Radar Project” to better understand and forecast an annual event known as the “Southwest Monsoon.”

Historically, the Southwest Monsoon has triggered many flash floods across the mountains of Colorado killing more than 350 people since the late 1800’s.

Earlier this summer, the same SMART-R mobile radar was used in the Great Plains during the VORTEX2 tornado research project.

Over a dozen recording rain gauges were installed in the San Juan Mountains by the National Center for Atmospheric Research to help calibrate the radar data. Additional recording rain gauges were provided by counties in southwest Colorado, the Southern Ute Tribe, and the NWS. Ft. Lewis College and Durango-La Plata County airport are hosting additional meteorological sensors provided by the NSSL and the University of Colorado.

NSSL’s Q2 project, a suite of products that combine the most effective multi-sensor techniques to estimate precipitation, was a test bed platform for the merging of SMART-R data with data from surrounding WSR-88D radars.

The project demonstrated the potential of a gap-filling radar in the Four Corners region, a region not optimally observed by surrounding NWS WSR-88D radars, leaving uncertainties in surface rainfall rates. The NWS will assess the usefulness of the data for improved detection of flash floods, and NSSL will use the data for advanced evaluation of dual-polarization rainfall algorithms.

A similar project was held in the upper Gunnison River Basin last summer.

Over the past five summers, students have been making thousands of phone calls to collect reports of severe weather from the public as part of the Severe Hazards Analysis and Verification Experiment (SHAVE).  SHAVE reports, when combined with the voluntary reports collected by the National Weather Service, create a comprehensive database of severe and non-severe weather events.

From May through August each year, SHAVE students conduct phone surveys of residents along the path of a target storm.  People who answer the calls are asked about hail size, wind damage and flash flooding that occurred during the past 60 minutes.  The phone data is blended with radar information on Google Maps to create a database on the storm for research.

“The process of verification through SHAVE’s calls is much more comprehensive and the potential applications of the high-resolution datasets are nearly endless, “ said Keith Sherburn, a student working with SHAVE as part of a NOAA Hollings undergraduate internship.

SHAVE data collected during the past several years is being used by a number of NSSL researchers to evaluate severe weather detection algorithms and techniques.  Several students are evaluating how well specific signals in the radar data indicate hail at the ground.  Other students are using SHAVE hail reports to test the reliability of different warning decision support products.  SHAVE wind reports are being studied to determine what radar signatures are most and least efficient for identifying areas of severe wind in thunderstorms. SHAVE flood reports are being used to evaluate the skill of legacy flash flood guidance and new gridded flash flood guidance being developed at River Forecast Centers.

SHAVE students also collected hail data on any storm that VORTEX2, the Verification of the Origins of Rotation in Tornadoes Experiment targeted during its field campaigns.  The data will be combined with data collected by mobile radars and probes on the same storm to increase our knowledge and understanding of severe weather.

Between 2006 and 2010, 24 students have worked for SHAVE. Largely student lead and run, SHAVE provides rich opportunities for professional development and leadership and has opened doors leading to year-round undergraduate research assistantships and research projects for more than half of the participants.