The American Meteorological Society recently awarded a researcher for his contributions to the weather radar community.

in Japan. He said he “couldn’t believe it,” when he was told he would be given the award. The award is one of the most prestigious in radar meteorology and it is a national recognition. It will be awarded at the 100th AMS Annual Meeting in Boston on January 2020.

“I feel very grateful and honored by this recognition, and I’m glad that my scientific efforts are contributing to the radar engineering community,” Schvartzman said. “It means a great deal to me given that there were so many great presentations at the conference, and this is a very important conference in the AMS community. I am very grateful to CIMMS and NOAA NSSL for the continuous support and encouragement to pursue my research ideas.”

The American Meteorological Society announced the 2020 award and honor recipients. Among those named was Sebastian Torres, a senior research scientist at the University of Oklahoma Cooperative Institute for Mesoscale Meteorological Studies, whose work supports technology testing at NOAA’s National Severe Storms Laboratory.

Torres received an Editor’s Award for the Journal of Atmospheric and Oceanic TechnologyTorres was honored for, “providing thorough reviews that have helped the decision-making process in controversial situations.”

Torres said he enjoys reviewing articles and helping his peers communicate their ideas more effectively. The process helps him become a better writer while learning about new discoveries in his field and contributing to AMS.

“Serving as a reviewer for publications like the AMS Journal of Atmospheric and Oceanic Technology can be time consuming, but I consider it an integral and rewarding part of my work as a scientist,” Torres said. “I take the opportunity to review the work of others as a way to pay it forward. Besides serving as a regular reviewer, I am an associate editor of JTECH. In this role, I often get to help the editor solve a controversial situation or reach a difficult decision, which can be extra challenging. All in all, serving as peer reviewer makes me feel part of my scientific community, so, being recognized with this award is a huge honor.”

He is currently involved in testing the Advanced Technology Demonstrator radar. Torres recently returned from the 39th AMS International Conference on Radar Meteorology. He presented on the ATD and its progress.

“I feel fortunate for the support I’ve had since graduate school and throughout my career,” Snyder said. “Such support and encouragement allows me to investigate meteorological matters and continue great research.”

Snyder’s work seeks to improve the detection of hail 20-30,000 feet above ground. Hail grows in this part of the atmosphere but can be difficult to detect until it is closer to the ground. Snyder said this work will increase warning lead times of severe thunderstorms, particularly those with large, destructive hail. Other research focuses include improving radar detection of debris produced by tornadoes in densely forested areas, and exploring artificial intelligence options for weather modeling to improve forecasts.

Since its 1996 inception, NOAA has participated in PECASE, which has recognized 43 of its best and brightest early-career scientists, including seven NSSL researchers.

Also honored was Bob Rabin, who received the 2019 Society of American Indian Government Employees Leadership Award for supporting American Indian outreach activities and for serving as a mentor.

Rabin said he was surprised to be nominated for the SAIGE award.

“I am honored to have the opportunity to share my enthusiasm of NOAA science with Native American and Alaska Native youth and to explore ways to connect that science with traditional knowledge and indigenous science,” he said.

The purpose of the SAIGE awards is to recognize individuals who have made contributions in the recruitment, retention, and advancement of American Indian/Alaska Native employees in the Federal workforce.

The National Weather Association recently awarded the  mPING  development team for help the application has provided in meteorology.

The Meteorological Phenomena Identification Near the Ground – or mPING – team was awarded the Larry R. Johnson Special Award for significantly contributing to operational meteorology.

“For creating the mPING applications which improved forecast operations by significantly increasing the number, quality, and type of ground-truth weather observations.​”

NWA will present the award during its annual meeting in late August. Individuals or groups must be nominated for the Larry R. Johnson Special Award.

MPING is a project by NOAA’s National Severe Storms Laboratory and the University of Oklahoma Cooperative Institute for Mesoscale Meteorological Studies. The free application was listed in Scientific American’s list of 8 Apps That Turn Citizens into Scientists.

View live reports and help NSSL and OU CIMMS researchers improve understanding of how different types of precipitation can be identified by radar.

The NOAA National Severe Storms Laboratory is proud to announce the American Meteorological Society named one of its senior research scientists a Fellow, recognizing his outstanding contributions to the atmospheric sciences during a substantial period of years.

Alexander Ryzhkov was one of more than 30 individuals recognized by AMS during a recent announcement of 2018 award winners and Fellows. Ryzhkov was awarded the prestigious honor during the annual meeting in January in Austin, Texas.

Fellows are nominated by their peers and elected each year by the AMS Council.

He received a Ph.D. in radio science and a Master’s degree in physics.from St. Petersburg University.

Ryzhkov is in the company of other AMS fellows including NSSL Director Steve Koch and NSSL researchers Harold Brooks, Don Burgess and Dusan Zrnic.

For a full list of 2018 awards and fellows, visit AMS.

During the spring, National Severe Storms Laboratory Research Scientist Adam Clark is usually in the NOAA Hazardous Weather Testbed. In fact, he has been a lead planner and facilitator of this groundbreaking experiment since 2010.

Clark will be honored by Iowa State University with the Iowa State College of Liberal Arts and Sciences Young Alumnus Award in an awards ceremony this fall. One of the highest awards bestowed by the College, it recognizes an alumnus under 40 years of age who has excelled in his profession and provided a service to his community.

Past awardees graduated with degrees in advertising, political science, English, journalism, Spanish and zoology. Clark received a doctorate in meteorology from Iowa State University in 2009 and started working at NSSL that year.

“Not only did I get a rock solid education in meteorology, but while I was still working towards my Ph.D., my advisor, Dr. Bill Gallus helped connect me with researchers in Norman, Oklahoma, who provided me with some of the datasets I used for my dissertation,” Clark said. “That connection helped me land a post-doc at the National Severe Storms Laboratory after I finished in 2009.”

Although Clark’s research has national benefits to public safety, he also tries to focus on impacts he can make right at home and in his scientific community by mentoring college students and serving as an editor for scientific journals.

In 2014, Clark received the prestigious Presidential Early Career Award for Scientists and Engineers, PECASE, joining five other winners from NSSL.

“I plan to continue growing in this position and hope to continue my research that involves helping to rapidly advance severe weather forecasting capabilities for NOAA,” Clark said. “I owe a huge debt of gratitude to all my professors at Iowa State – especially Bill Gallus for his guidance and contagious love of science that helped get me to where I am today.”

More information about the award: https://alumni.las.iastate.edu/awards/. 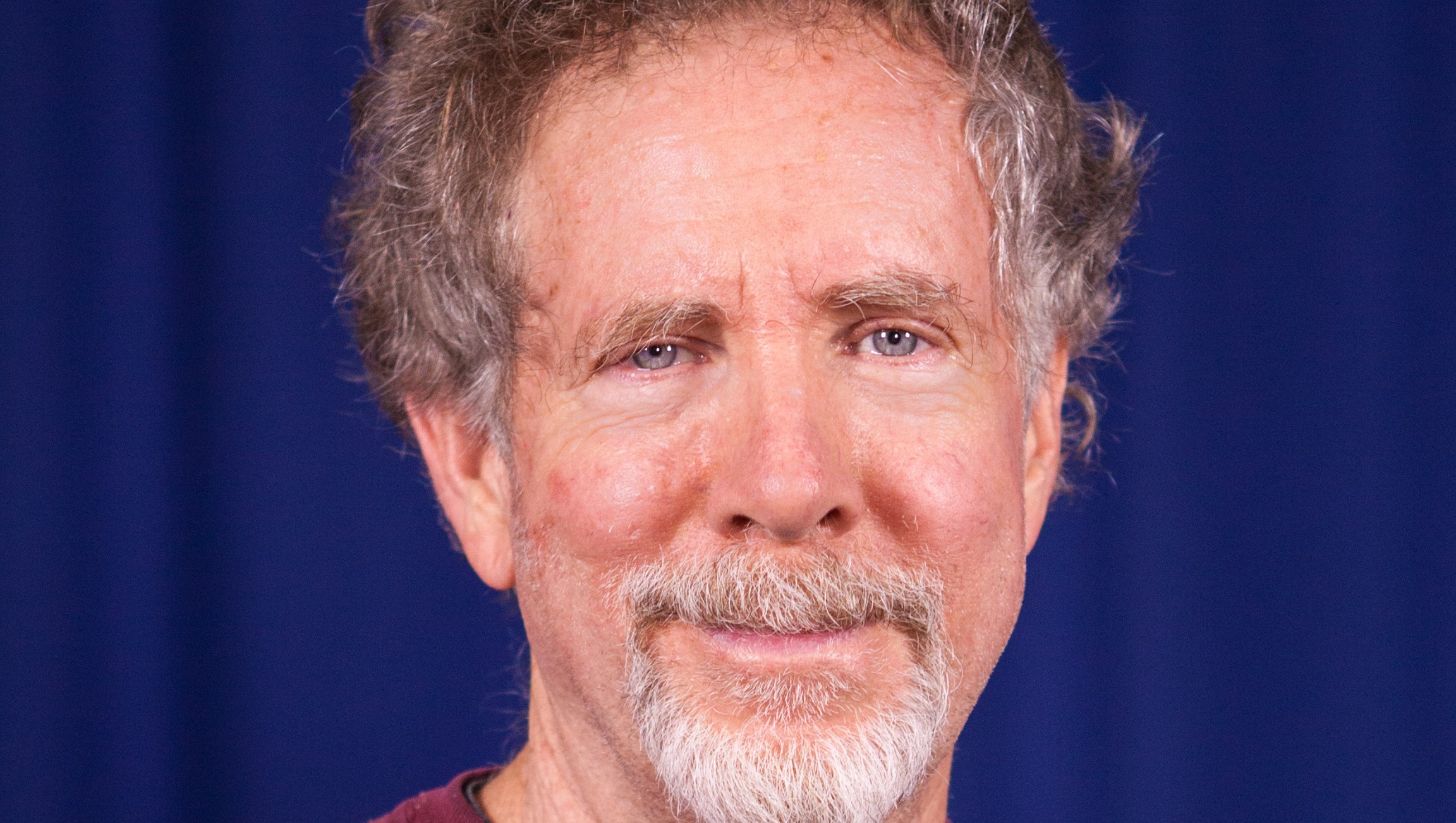 NSSL’s Bob Rabin has been selected to receive the 2016 EEO/Diversity Award for Exemplary Service. This is the first year that NOAA’s Office of Oceanic & Atmospheric Research has presented EEO/Diversity awards, and recipients will be recognized at a town hall meeting next Friday, February 26.

Bob took over diversity outreach activities at NSSL about five years ago. He serves as the Lab representative on the OAR EEO Advisory Committee. Beyond maintaining a record of NSSL’s diversity programs, he has been involved in several college and university outreach projects, mentored minority students, and attended national conferences on behalf of the EEO Office.

Notably, Bob attended the Native American Higher Education Consortium in March 2014 in Billings, Montana, where he met with faculty and students working on a project to build an earth imaging satellite (BisonSat). He became a mentor to one of the students, Noel Stewart, who brought her interest in hydrology to NSSL for a one-month stay in September 2014. 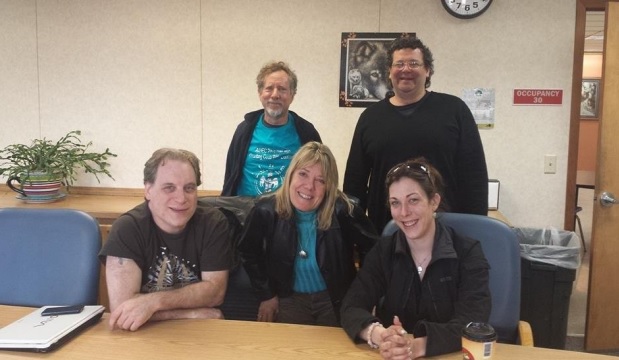 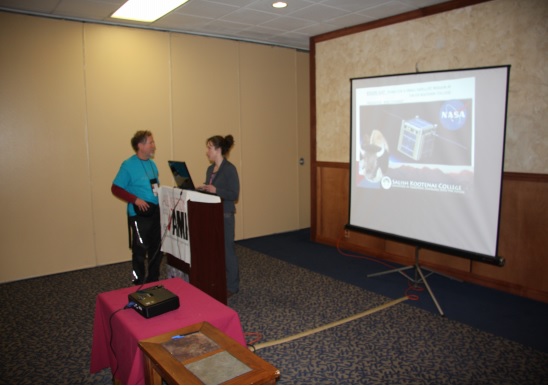 Preparing for the research presentations

Bob also spent two summers in Barrow, Alaska, participating in a STEM course at Ilisagvik College. He taught the students about remote observations and gave them the chance to learn how to forecast the local weather. He later offered an online course called “Indigenous Knowledge on Climate Science,” a program he would be happy to provide again.

Moving forward, Bob is helping develop a possible partnership between NOAA and the Bureau of Indian Affairs. He is also pursuing opportunities for NOAA employees to assist with instruction at Tribal Colleges. His investment in diversity and outreach activities enriches our community at NSSL and beyond. 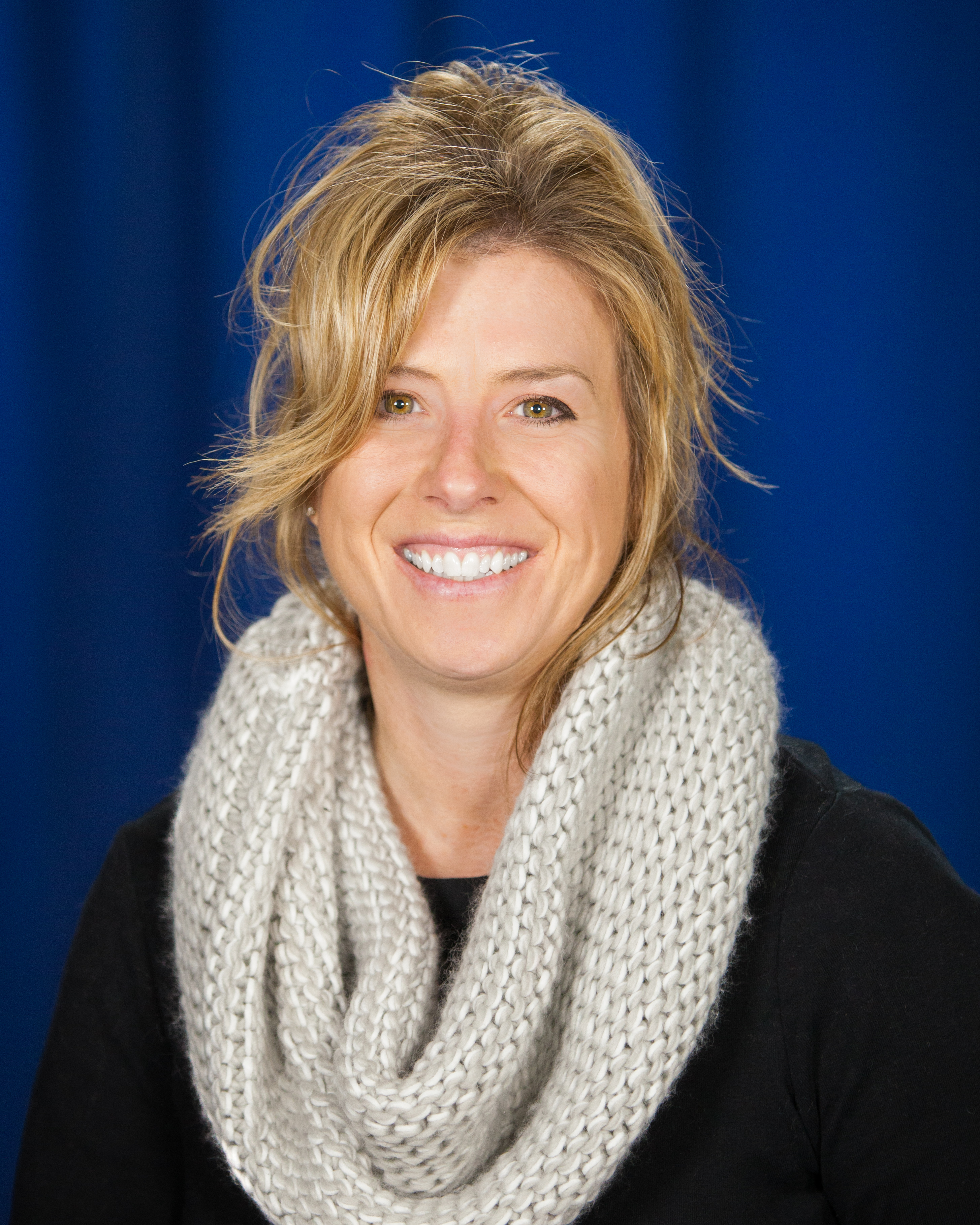 NSSL Administrative Assistant Linda McGuckin was named NOAA Employee of the Month for December 2015. She is one of two individuals selected for the honor by VADM Michael S. Devany, NOAA Deputy Under Secretary for Operations.

In September 2014, Linda volunteered to serve as temporary property custodian when the previous property manager retired. She went above and beyond the call of duty, not only sustaining property management activities at NSSL, but improving their overall quality and efficiency. Under her leadership, the inventory team met all deadlines with an exceptionally high inventory accuracy rate of 99.9 percent.

“This recognition was unquestionably deserved, and we are all indebted to Linda for her outstanding service in a time of dire need,”said NSSL Director Steve Koch. “She exemplifies the meaning of being a team member and serving where there is a need.”

Congratulations to Linda and thank you for all of your hard work! 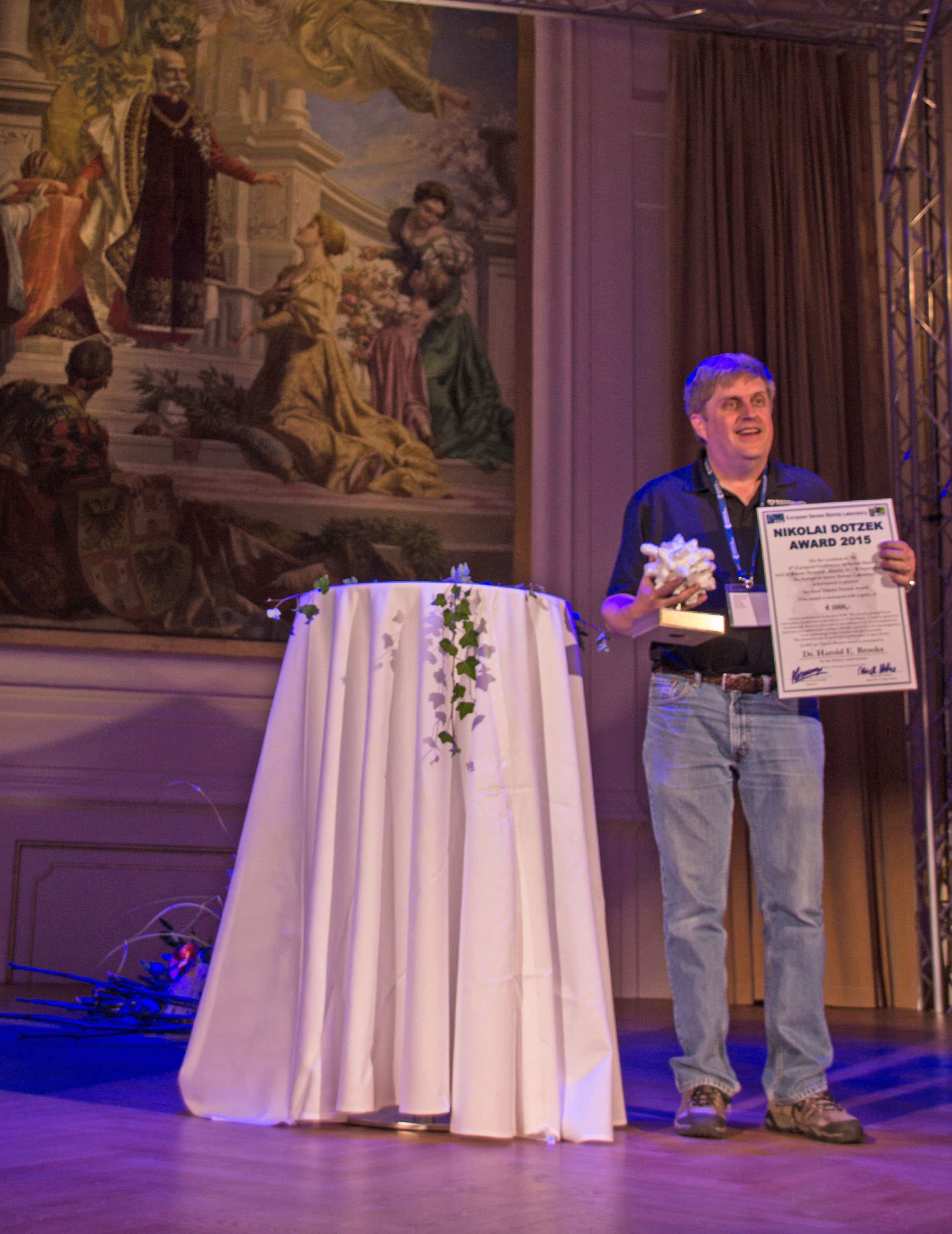 NSSL’s Dr. Harold Brooks was awarded the 2015 Nikolai Dotzek Award at the 8th European Conference on Severe Storms held in Wiener Neustadt, Austria, in mid-September. This prestigious award commemorates the first director of the European Severe Storms Laboratory, who passed away in May 2010. It is the third time the award has been presented.

Dr. Nikolai Dotzek was known for his desire to increase understanding and awareness of severe storms. He was a firm supporter of collaboration within the European severe storms research community. The award in his honor was designed to recognize outstanding contributions to the science of severe storms.

Dr. Brooks was selected as the recipient of this year’s award for his pioneering work in assessing climatology and risk of severe storms, his contributions in connecting vertical wind shear in the lower troposphere to the occurrence of tornadoes, and his work on verification methods in extreme events. He has been an integral part of the staff at NSSL since 1991.

“Over the years, I’ve worked with, visited, and hosted European scientists, including attending all eight of the European Conferences on Severe Storms and writing more than ten publications with them,” Brooks says. “I have many professional friends in Europe, but Nikolai was my closest. We shared life outside of work both here in Norman and in Europe. I can think of no named award that could mean more personally in terms of who it honors.”

For more information about the award: http://www.essl.org/cms/nikolai-dotzek-award-2015/ 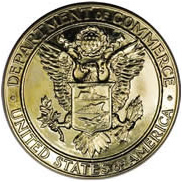 One of the highest awards presented within NOAA will be awarded to the NSSL team that developed Multi-Radar Multi-Sensor, a system that helps forecasters manage the flood of weather data available to them. Under Secretary of Commerce Kathryn D. Sullivan announced the award of a NOAA silver medal for science/engineering achievement. Their work was a collaborative effort with the University of Oklahoma’s Cooperative Institute for Mesoscale Meteorological Studies.

Congratulations to the team!