This week is gearing up to be the most active week thus far in the SFE, with every day having the chance of severe weather somewhere in the center of the country. Yesterday, we had three separate areas of potential severe weather to consider: 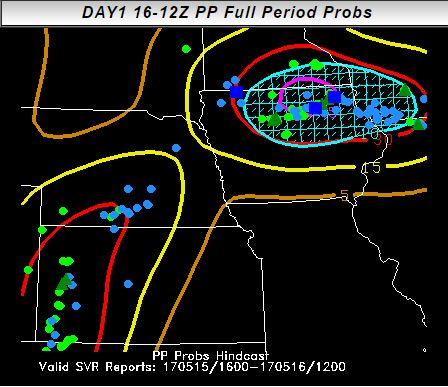 The first area was concentrated across northern Iowa and far southwestern Wisconsin, the second area stretched from central Nebraska south through western Oklahoma, and the third area was in western South Dakota. Since SFE forecasts cover a subset of the contiguous United States, choosing which areas to forecast for is an important part of the forecast process. In this case, the worst severe convection was anticipated within the eastern two areas, and the forecast domain was chosen to encompass as much of those areas as possible.

Areas are selected differently depending on the day of the week. On all days except Monday, the forecast area has been decided during the prior afternoon while making the Day 2 forecast, which occurs at both desks. Typically on these days, the desks separately consider coarser-resolution guidance such as the NAM and the GFS, as well as some of the long-range CAM forecasts. This year, we have a few ensembles running through some or all of the Day 2 forecast period (defined as 1200 UTC – 1200 UTC), including the CAPS mixed-physics ensemble and the NCAR ensemble. We also have deterministic guidance running beyond the Day 2 period, including two configurations of the FVGFS, which implement the FV3 dynamical core, and forecasts from the Unified Model run by the UK Met Office. After considering broad-scale forcings such as the 500 mb wind field and storm-scale parameters such as updraft helicity, the desks debate the area’s placement and come to an agreement.

On Mondays however, there is no Day 2 forecast. Picture the same process, but add observations, mesoanalyses, and many more forms of convection-allowing guidance – narrowing in on a specific area with all of those favorable parameters is quite difficult and often involves slightly more debate between the desks!

As this week progresses, the selection of areas should be easier, as the next two days’ domains have already been set. Both desks have issued forecasts for Day 2, and the Innovation Desk has issued a Day 3 forecast (17 May and 18 May, respectively). While the current areas are quite broad, as we get to shorter time scales we hope to refine the threat areas. The three separate areas considered during Monday’s forecast seem to foreshadow the active week that’s unfolding, and there will be no shortage of debate as the week progresses.