Continuing on the last post’s theme of choosing the proper forecasting domain when we have multiple areas of convection to contend with, today’s discussion will focus on the boldest of forecasting moves:

The full period forecasts issued by each desk are a group effort, with input from participants guiding the placement of the lines. Prior to issuing the lines, participants consider observations, coarse-scale operational models such as the GFS and the NAM, and fine-scale operational and experimental models, such as the HRRR, FVGFS, and the members of the CLUE ensemble. Convection-allowing models, with grid spacing of ~3 km, provide very realistic-looking radar signatures that can give confidence in specific areas of threat beyond those of the GFS. For a quick example, see the GFS forecast for 18 May 2017 at 0000 UTC: 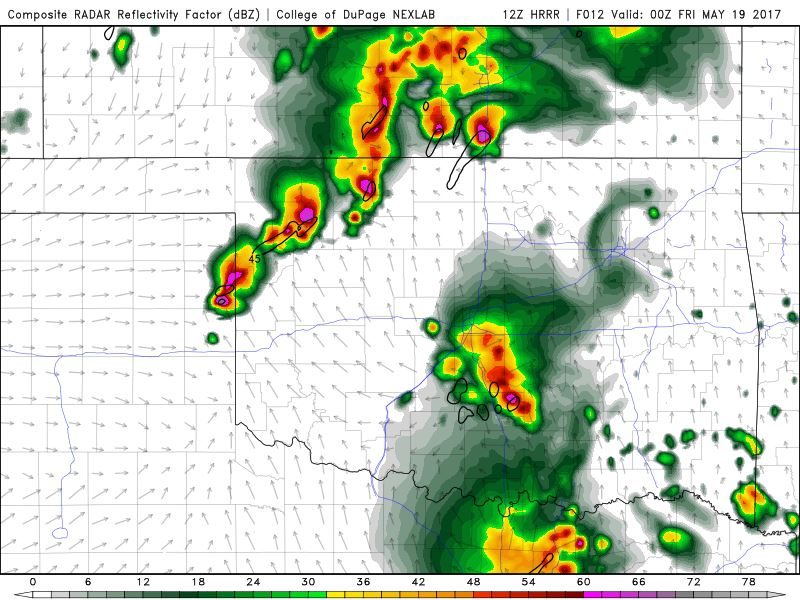 The echos from the HRRR suggest that these storms would be supercells, given the strong tracks of  hourly updraft helicity (as indicated by the black contours) and the individual reflectivity echoes. Images such as these can give forecasters more confidence in the location(s) of convection, particularly when compared to the larger-scale QPF precipitation products that current coarse-resolution models can provide.

Typically, forecasters insert a gap in their forecasts when they are confident that the gapped area will be void of, or at least a minimum in, report coverage. However, this can be a risky proposition, and as such is dependent on confidence, time scales covered, and how far in advance the forecast is made, among other things.Given the typical confidence of specifics in a Day 2 or Day 3 forecast over the size of our forecast domain, gaps in the probabilities are rare. The rarity can also be attributed to the long nature of the forecasts: they are for a 24 h period, and should cover all of the severe convection that takes place during that period.

However, both desks also forecast for shorter temporal periods, either for four-hour individual hazard forecasts (on the Individual Hazards Desk), or for hourly report coverage areas and hourly probabilistic forecasts (on the Innovation Desk). In those forecasts, it’s often easier to discern threat areas. For example, compare the full period hail forecast for 10 May 2017 with the 18-22 UTC four-hour hail forecast: 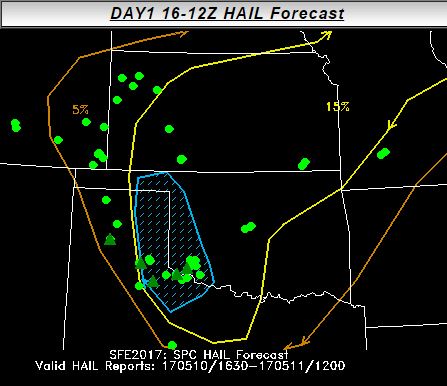 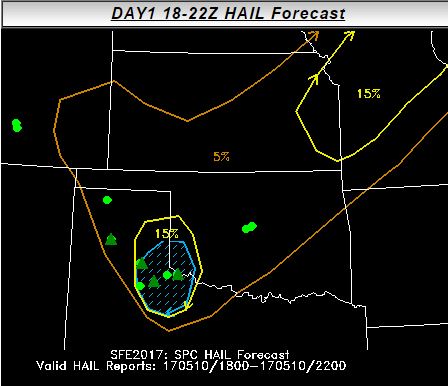 From these forecasts, it’s easy to see that the initial threat was anticipated in southwest Oklahoma, northern Texas, and over Missouri. Later in the day,, the threat was expected to shift northeastward to cover most of Oklahoma and Kansas. However, unexpected elevated convection led to a couple hail reports in central Oklahoma – right in the gap between the 15% areas. Maintaining a 5% in this area accounts for those reports, showing that the forecasters anticipated at least a chance of hail in between the higher probabilities.

At the Innovation desk, hourly report coverage areas provide no such latitude to include probabilistic information – forecasters are asked to circle the areas of anticipated report coverage. Therefore, a gap in those forecasts indicates that the forecaster doesn’t think a report will occur there. An example of this gap can be seen in the 02-03 UTC report coverage forecasts from 16 May 2017. 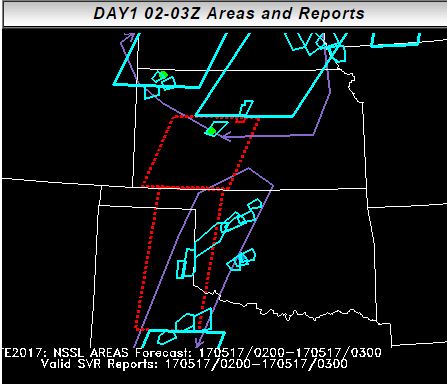 While only two reports had come in by the time of evaluation, displaying the warnings shows the skill in delineating the two areas of convection. Indeed, two areas of severe storms occurred on this day, and neither warnings nor reports occurred in the gap between the areas.

Initial forecasts take place using one run of the NEWS-e, which outputs forecast fields every five minutes during our periods of interest. These forecasts are then updated using a newer run of the NEWS-e initialized one hour later. Since the NEWS-e assimilates data each run, if the new forecast trends match the older forecast trends, then the confidence in our forecast increases. From the image above, it’s clear that two main areas of reports occurred – one to the north, across Wisconsin, and a larger area to the south across Iowa. While the initial forecasts highlighted the Wisconsin storms, the extent of the storms in Iowa was not well-reflected by the initial forecast. The updated forecast looks quite different:

This forecast now has two areas of 60%, and the minimum between the two areas is two probabilistic forecast categories below the maxima. Clearly, the NEWS-e correctly created more confidence in the gapping of the forecast. With two weeks of the Spring Experiment still to go, we’ll see if we can “fill in the gaps” of our knowledge to create more gapped forecasts!