Well, the theme of the first two weeks of the experiment has been convection, convection, convection! True, this is the theme of all of the Spring Forecasting Experiments, but it has been rare in recent years to have such continuously busy weather throughout the first two weeks of the experiment. Most days thus far, convection is ongoing when we first enter the HWT at 8:00 AM. Multiple times during the first week and a half there have been watches or warnings from the NWS within the area that we’re forecasting for as we walk in the door.

Obviously, this produces a few challenges! First, we have to worry about the severity of the ongoing convection and whether it will strengthen, weaken, or continue on at its current intensity. Second, we have to concern ourselves with the potential for recovery behind an initial round of convection. Finally, we need to worry about storms will develop elsewhere in the domain, ensuring that the ongoing convection doesn’t take all of our attention. While we limit our area of responsibility to a regional domain within the CONUS, we have still faced this problem multiple times within the SFE thus far and occasionally have had issues keeping track of all of the areas of storms within our regions. Even the lower-end severe days, like yesterday, have existing precipitation that we need to determine the evolution of.

One type of plot we examine is the paintball plot, which shows areas of high reflectivity from each ensemble member. It gives us clues to the convective mode, which can help determine what sort of severe hazard we can expect. Here’s an example of the paintballs from yesterday from five different ensemble subsets, with the observed reflectivity overlaid in the hot pink contours: 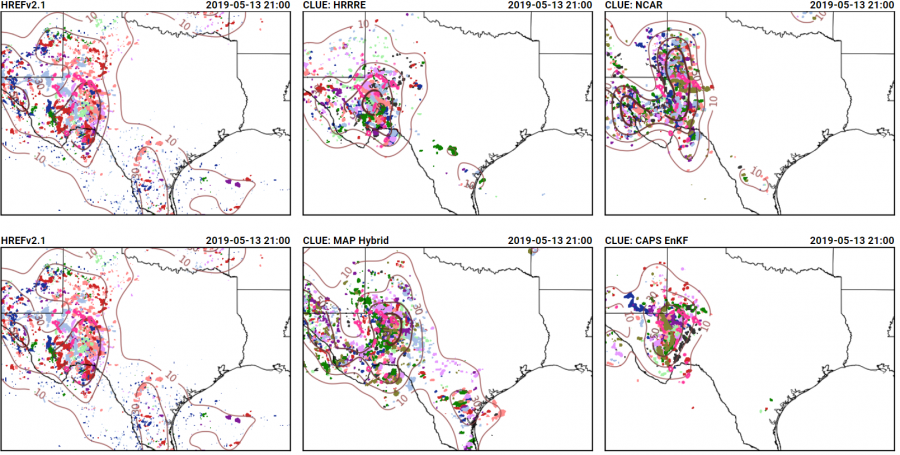 Though they may look like Jackson Pollock paintings, if you focus on one color you can start to pick out areas of discrete storms as well as areas that look like small line segments. Going through the hours, the linear structures in most ensembles progressed to the east or southeast, while cellular modes remained to the south. While these plots demonstrate what the radar may look like, it doesn’t always give insight to the severity of the storms. The updraft helicity (or UH) has been determined to be a good proxy for severe weather, so we also consider the 4-h maximum UH and the probability of UH exceeding a threshold. Yesterday, we didn’t see much in the reflectivity paintball plots that would indicate severe weather, but the UH told somewhat of a different story! 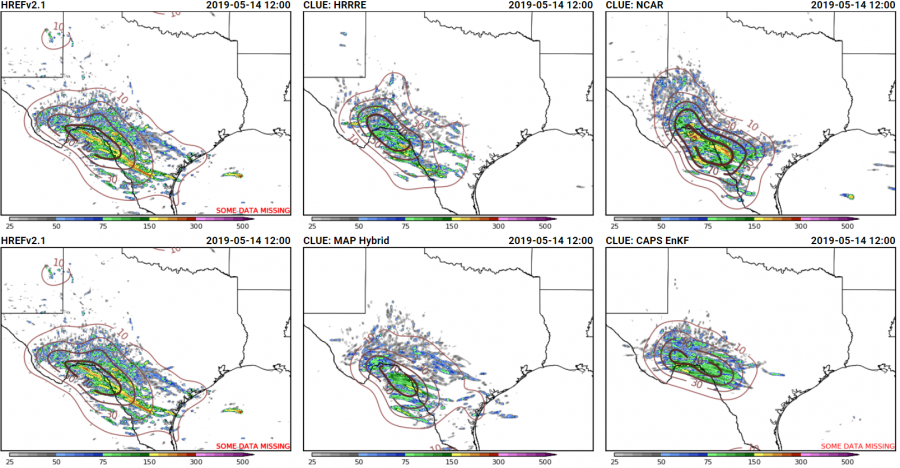 Those continuous swaths of high UH coming out of Mexico into Texas definitely caught our attention, and our forecasts reflect that there was a chance of a supercell moving across the border into Texas after initiating off of the high terrain. The UH prompted us to take a second look at the mode in the reflectivity plots, confirming that discrete supercells were a possibility.

Sure enough, a discrete supercell moved into Texas, and produced large radar-indicated Maximum Estimated Size of Hail (MESH). When we are in areas with low population, we use MESH to provide a secondary verification source in addition to Local Storm Reports (LSRs), and also look at warnings issued by the local NWS Weather Forecast Offices. Warnings indicate that an expert forecaster saw enough of a threat to warn the public of impending severe weather.

While the only hail LSR occurred across the southern part of Texas, the presence of several warnings and MESH tracks indicating hail greater than 1″ led to these forecasts being rated pretty well by the participants.

With so much convection to examine, even on the more marginal days, we have had a lot of activity in the SFE so far this year. And more looks to be on the horizon! The CAMs will likely provide plenty of convective scenarios in the coming weeks to test their capabilities.