Yesterday, 11 May 2017, gave the participants in SFE 2017 many things to consider. A potent upper-level low pressure system was finally evolving eastward, after giving the Experiment interesting weather to forecast all week while sitting over the southwest. As the experiment began, ongoing elevated convection was already producing reports over northeastern Oklahoma, and the participants were eyeing the chance for some severe weather locally. 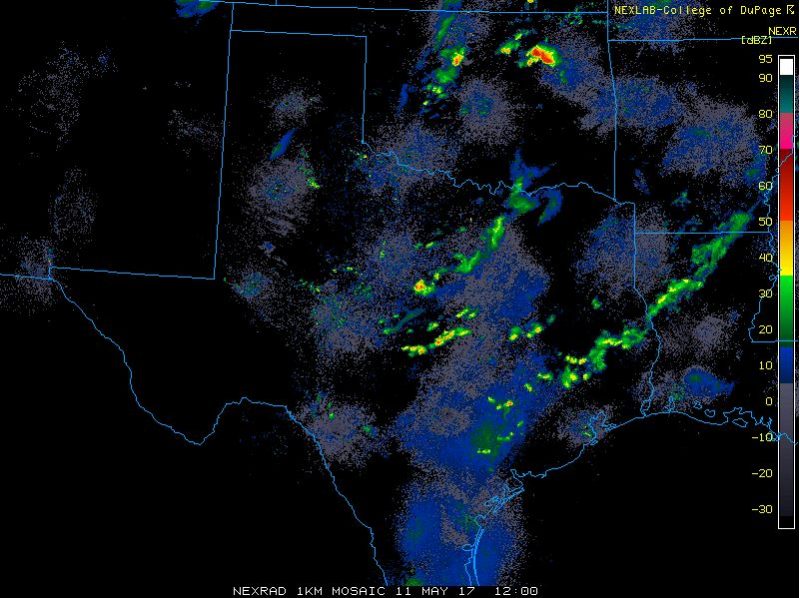 By 2000 UTC (3PM CDT, near the end of the SFE’s daily activities), cellular convection was initiating all across northern Oklahoma, northern and western Arkansas, and northeast Texas. Many of these storms quickly began to rotate. 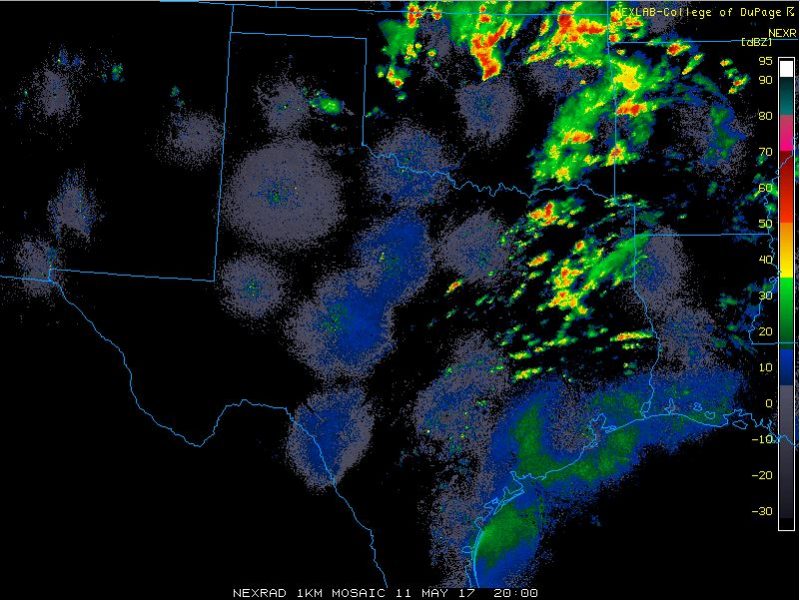 All indications from the CAMs were that ample convection would occur over a large area, raising concerns over potential outflow boundaries and convective mode. There were also concerns about elevated vs. surface-based storms, which could produce different hazards.

On all days in the experiment, we look at guidance from CAMs and CAM ensembles alike, and yesterday the paintball plots of reflectivity greater than 40 dBZ from the ensembles produced Jackson Pollock-esque maps by 00 UTC. The Storm-Scale Ensemble of Opportunity (SSEO) had many members showing a linear structure stretching from Arkansas to Texas and individual cells stretching along the warm front near the Arkansas-Missouri border. However, the members were in more disagreement over what was occurring over north-central Oklahoma, showing both linear systems and discrete cells. 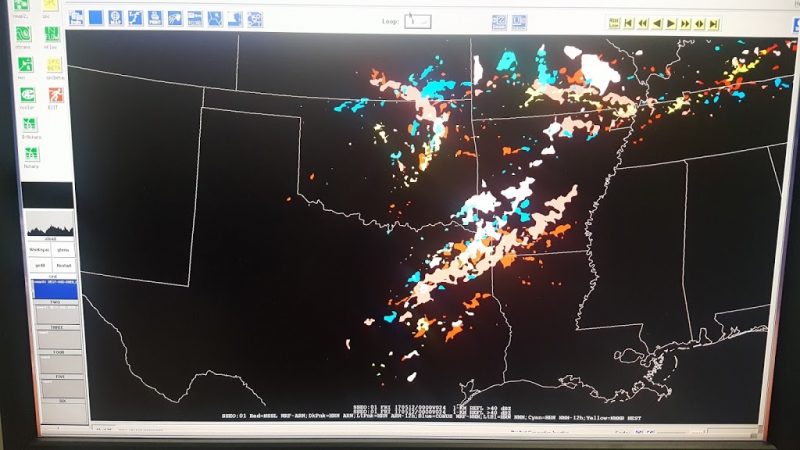 The NCAR ensemble showed a relatively similar area of convection, albeit with more coverage by the convective cores. The increased coverage may be partly a function of having more two members in the NCAR ensemble than in the SSEO. The linear structures stretching down the cold front at 0000 UTC were slightly more segmented than some of the SSEO members, and there appeared to be many more linear structures along the warm front than in the SSEO. Some members gave the indication of a double line structure, with linear convection along the cold front behind the main squall line. 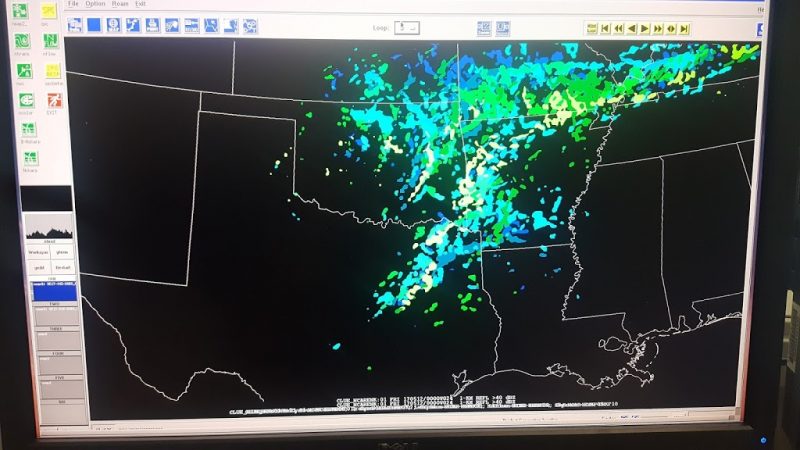 Participants also considered the HRRR ensemble, which had linear structures further to the north, convection all across Arkansas and perhaps less focused on the warm front, and more segmented structures from Arkansas to Texas. However, it was also showing somewhat of a double-line structure along the cold front and behind the initial squall line, as was seen in the NCAR ensemble. The HRRR ensemble at this point also showed less convection in north-central Oklahoma than the NCAR ensemble and the SSEO. 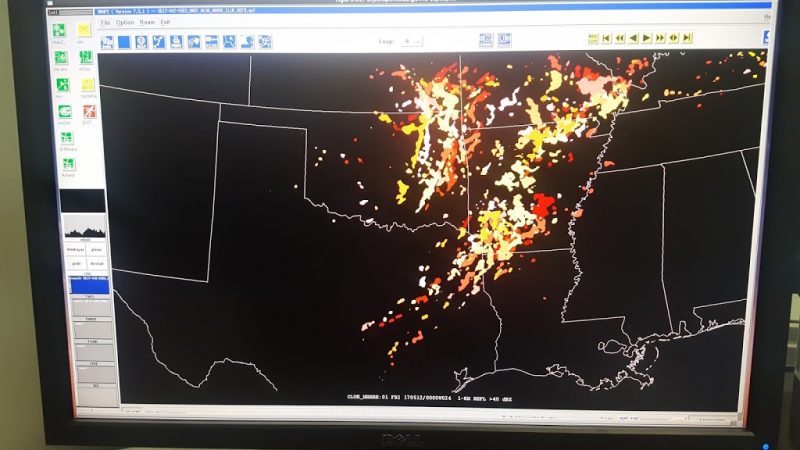 These are just snapshots of the reflectivity greater than 40 dBZ at one point in time. Participants also considered the updraft helicity tracks and probabilities, the overall reflectivity fields, and the entire period from 1600 UTC to 1200 UTC the following day. Besides the ensembles, extra focus was given yesterday to the operational and experimental versions of the HRRR, which at 0000 UTC showed very different structures underneath the center of the low. 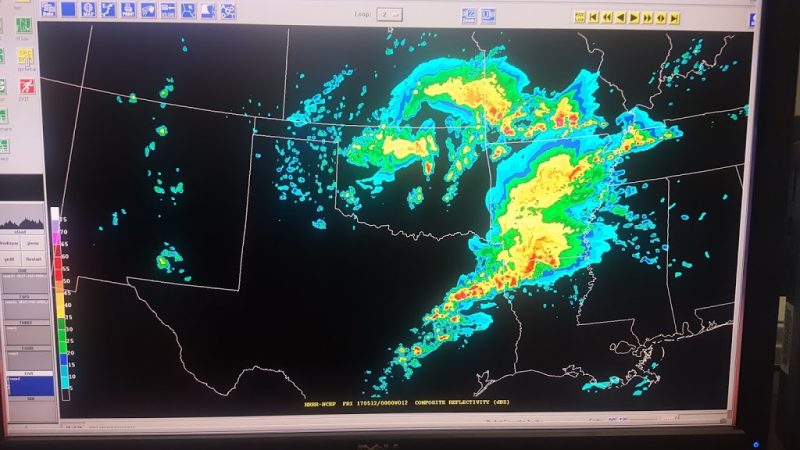 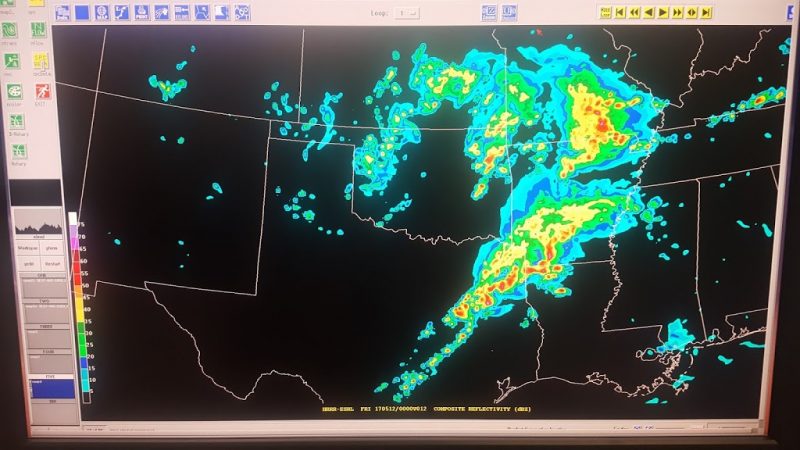 The operational HRRR (top) has heavier convection with more coverage over north-central Oklahoma, and more stratiform precipitation behind the linear structures in Arkansas. There were also more hints in the operational HRRR of cellular structures along the warm front, but the experimental HRRR (bottom) depicted more intense cells across northeastern Oklahoma.

While the CAM ensembles suggested mixed-mode signals for this hour, the upscale growth of convection was forecast to be mostly complete by this hour. How did the CAMs do? 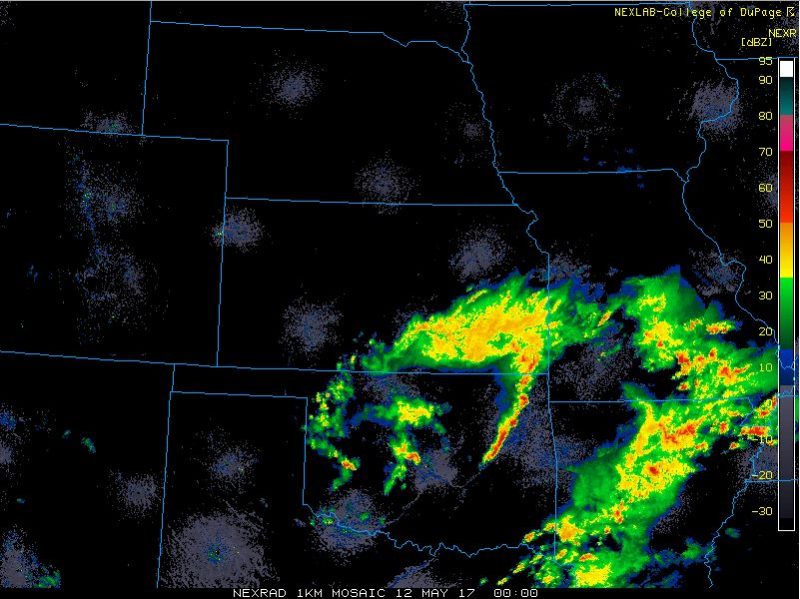 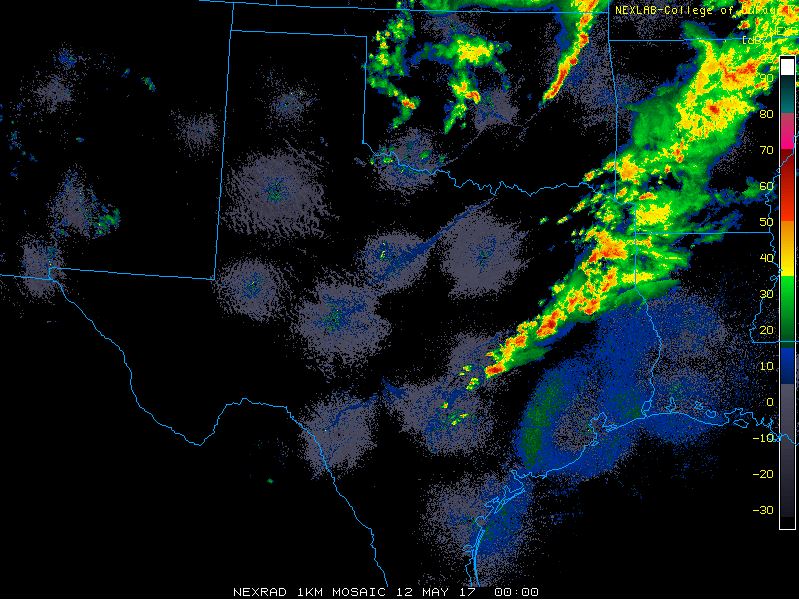 The radar images tell the tale – there was a small double line structure, with a large squall line stretching into Texas and a second line across northwestern Oklahoma. Cells along the warm front in Missouri and Arkansas did not congeal into a line, and a few cells were present in central Oklahoma.

Prior to 0000 UTC, significant hail and wind reports across much of north-central Oklahoma (including a 4.25″ hail report!), associated with supercells close to the core of the low pressure system. This case study will be an interesting one for CAM developers, encompassing mixed modes, early elevated convection, significant severe weather, and two active fronts. The atmosphere was more than happy to provide us with any type of midlatitude convective weather we could ask for yesterday, offering researchers and forecasters alike new questions and challenges.