One of the innovations introduced last year was the drawing of isochrones, or lines of equal time. These isochrones indicate the start time of the four-hour period where 95% of the reports at a point were expected to occur – each point has one four-hour period. This year, to aid in the drawing of the isochrones, participants now also draw hourly report coverage areas each hour from 18Z to 03Z. The final product looks something like this forecast from 25 May 2017: 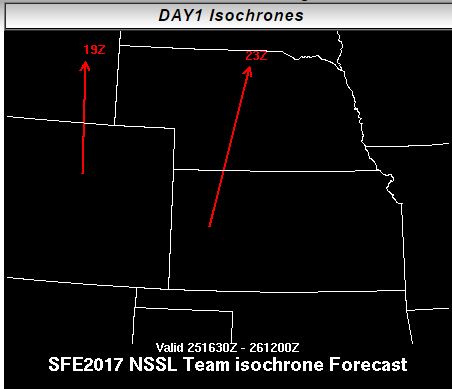 A few lessons were learned from the questions raised last year, and subsequent changes have been made. The first of those changes is to only draw when the total severe threat exceeds 15% (which has thus far occurred on every day during SFE 2017!). In SFE 2016, drawing the isochrones on days with only a marginal potential for severe weather was a bit like playing “Whack-a-mole” with the severe convection. The report coverage hours were also added, to give participants an idea of where the isochrones should be placed. If these areas overlap, i.e., they expect reports at a given point over more than one hour, it helps them visualize the probability of severe at that point over time. How the isochrones and the areas are connected is shown in the following figure: 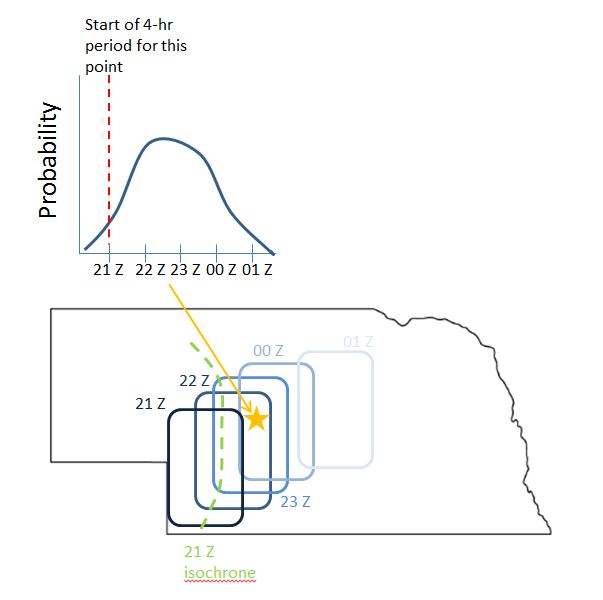 Intuitively, it doesn’t seem like the 21Z isochrone should be so far into the 21Z hourly coverage area. However, last year the isocrhones were approximately an hour late, and the current thinking is that participants were circling the peak of the distribution at a point without accounting for the ramp-up. In other words, the area circled by the 21Z contour likely started experiencing the ramp-up in probability of severe weather starting at around 20Z.

So to forecast the isochrones, participants need to take into account multiple forecast challenges such as convective initiation, the onset of severe weather, system speed, system maintenance, and the potential for later redevelopment. In the case of redevelopment, participants have to select which four-hour period will contain most of the severe reports. If the redevelopment occurs within four hours of the initial convection, the four-hour period that encompasses both waves is the four-hour period that should be assigned to that point. If it is further, then they must select which period will be most severe.

To better understand the isochrones (since they take a while to wrap your brain around!), SFE 2017 has explored multiple ways of visualizing them in addition to schematics. One method uses first-guess isochrones derived from ensemble guidance, such as these isochrones for 27 May 2017 from the NSSL-WRF ensemble. 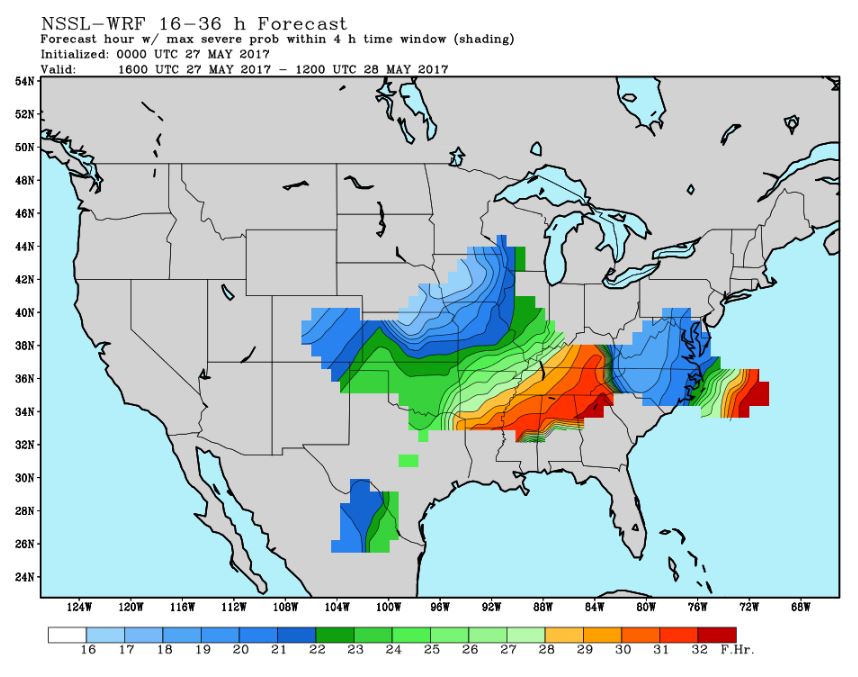 This scenario forecasts early convection across Iowa and Colorado, with later convection occurring across much of Oklahoma and Arkansas, slowly pressing eastward and ending the forecast period in Georgia, Tennessee, and Alabama. A second wave initiates in Virginia and North Carolina before moving offshore in the later periods of the forecast.

Participants have also attempted to draw ex post facto isochrones using the reports from two separate events. These isochrones can be messy, particularly in cases where storms didn’t produce reports at similar times, as can be seen in these examples from 9 May 2017. 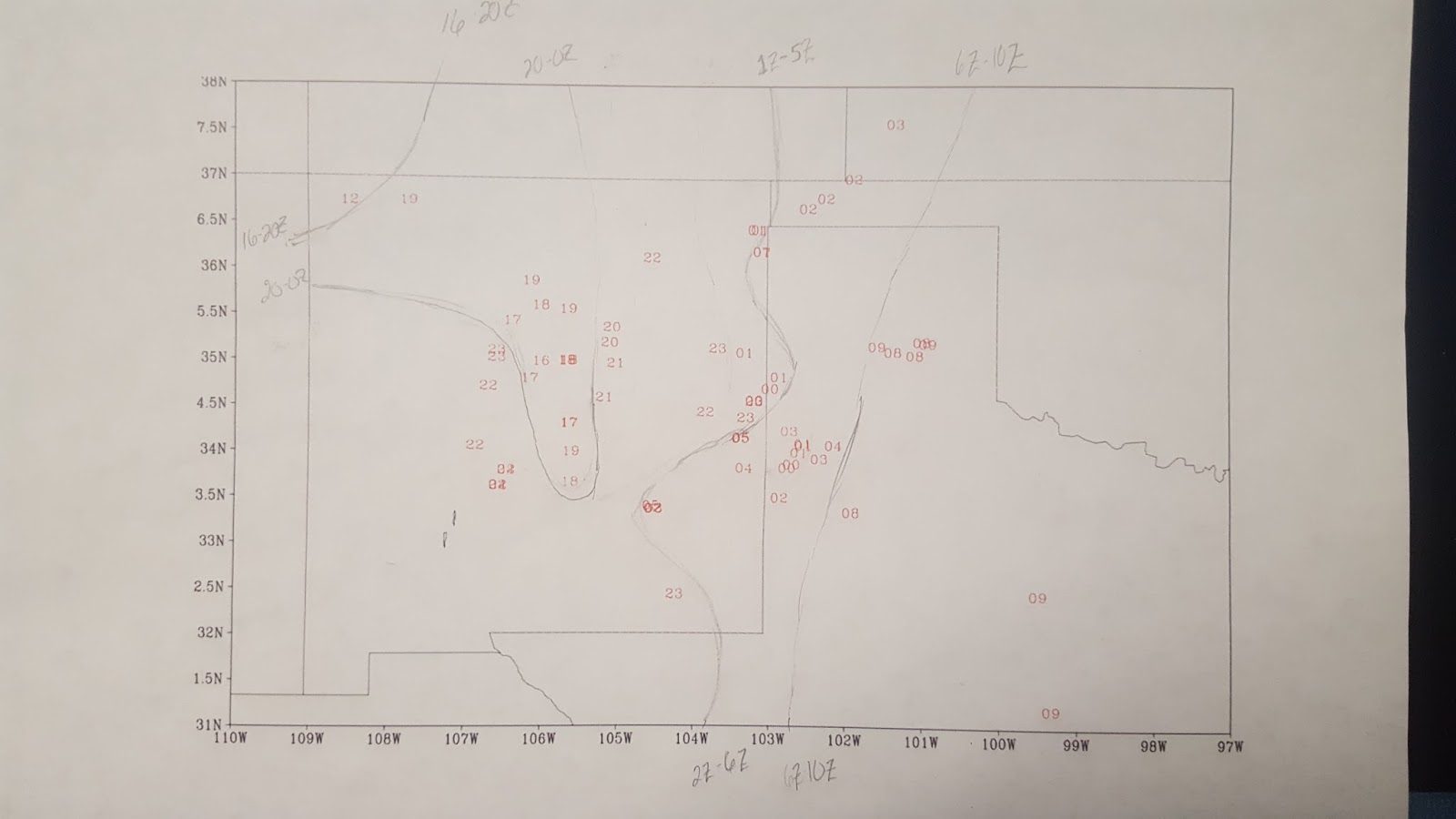 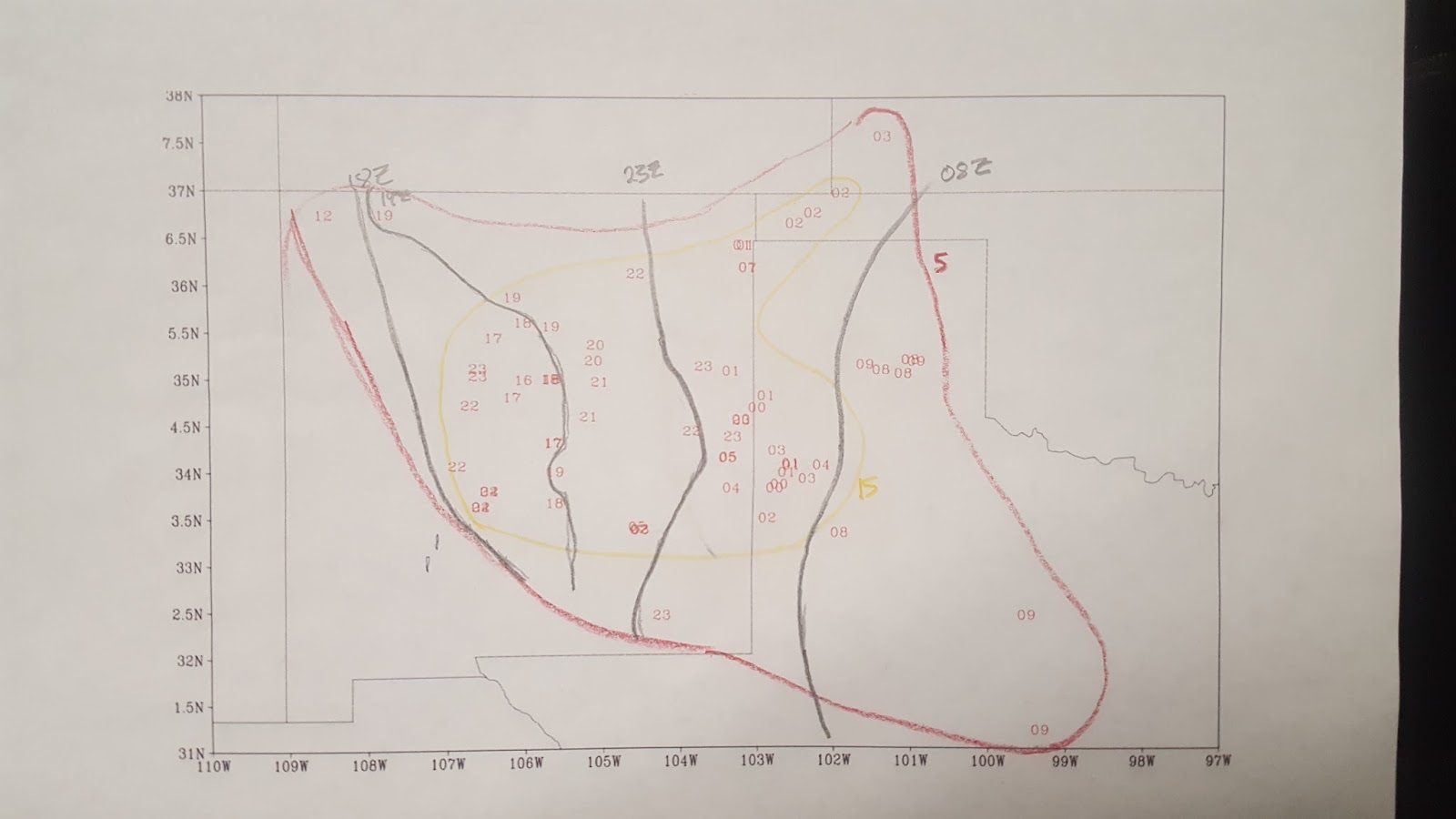 The first example here shows a participant who ischroned every hour, then went back and looked at what four-hour periods would be best representative of the reports, resulting in the erasing of some lines and the adjustment of others. The second example shows how the overall area of report occurrence (which is about the 15% contour) serves as a template to draw the isochrones upon. As with any hand analysis, the specifics differ, but the overall story told by these ex post facto isochrones tell a similar story.

As the experiment progresses, the isochrones continue to be a challenging product for the participants to produce. However, the participants are always game to try these experimental forecasting techniques, and have provided great feedback to improve the training and the future implementation of the product. Isochrones may be a slippery concept, but our participants have proven themselves up to the challenge!