Week 1 of SFE 2016 is in the books, and overall it was a very successful first week. We had a great group of participants, who gave us good feedback despite the relatively marginal nature of the weather last week. Our domains focused on the eastern and southeastern United States, but we did have one day of forecasting in the west and some long-range south central plains forecasting towards the end of the week. Verification of these forecasts will commence tomorrow and, considering that Norman is in a tornado watch as I type this (~00Z 8 May 2016), we should have some weather to talk about tomorrow. At the end of each week, I’m going to discuss a question we explored throughout the week. This week, we’ll talk about drawing isocrones, lines highlighting the four-hour period of highest risk for any given point.
One of the largest sources of discussion this week was the interpretation of the isochrones – lines of equal time. While everyone grasped what a line of equal time is, what time we were highlighting was a topic of much debate. The strict definition of the isochrones is such that they are capturing the leading edge of the area of maximum reports for the next four hours. However, several interpretations of the isochrones developed, partially because forecasters and researchers may think of the term “leading edge” differently. The leading edge of severe weather is not necessarily the leading edge of the maximum reports for a given time. Thus, by about Wednesday, a new way of thinking about the isochrones had formed. They were essentially four-hour watch boxes in which the majority of reports would occur. So, if you have an 18Z line, a majority of the reports between 18Z and 22Z would fall between the 18Z isochrone and the 22Z isochrone. An example case would look something like the following image, with the reports color-coded according to time of occurrence, the colored curves being probability of severe weather occurrence, and the black lines being the isochrones.

If we put an example watch box over this figure, it would look something like this:

However, keep in mind that this watch would extend between the lines from north to south. You may have noticed that the lines are drawn every two hours – we are adding increased resolution to these four hour periods, contouring the area of highest risk from 18Z-22Z, 20Z-00Z, 22Z-02Z, 00Z-04Z, and 02Z-06Z. If you’re having a hard time visualizing this, you’re not alone! Here’s a final schematic, highlighting the four-hour period of highest risk for each area.

To the right of the 18Z line, the greatest threat is from 18-22Z. If you were driving west to east at 21Z, say from Missouri to Indiana, when you crossed the 20Z line you would still be in an area experiencing its four-hour window of greatest threat. However, you would now expect that threat to persist until 00Z rather than until 22Z.

These isochrones can be automated as well, by using updraft helicity (UH) as a proxy for severe reports. An area with a probability of severe weather exceeding some threshold (in our manual drawing of isochrones we use 5%, though 15% may be more appropriate if these are thought of as “watches”) is combined with the timing of the UH tracks and smoothed, to determine when the four-hour window of greatest risk is. Adam Clark has put together such an automation for the NSSL-WRF ensemble, using two methods of visualization. The first has both probabilistic information and timing information, while the second solely illustrates timing. Examples of these two graphics are below, from 5 May 2016. From these figures, you can see that there are two areas of convection forecast. The first initiates along the CA/NV border and moves north-northeastward, while the second initiates in ID/MT. 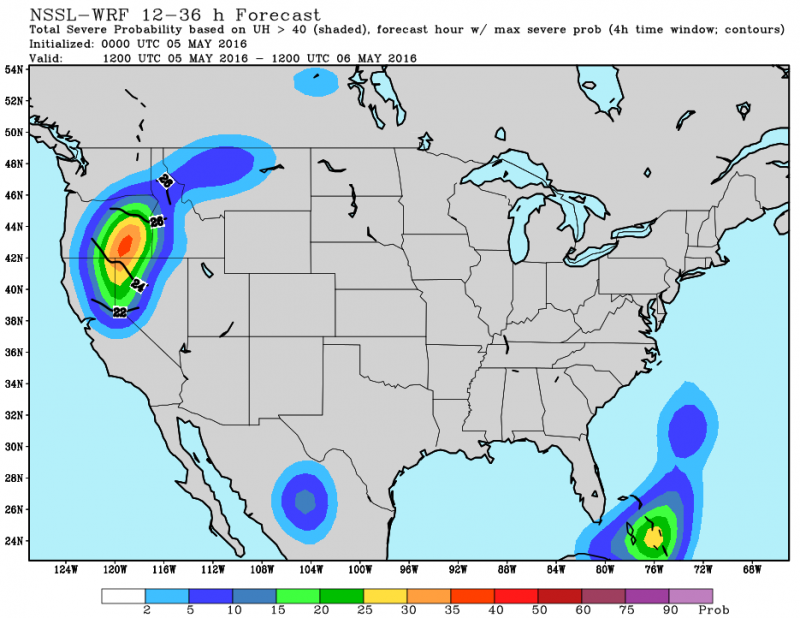 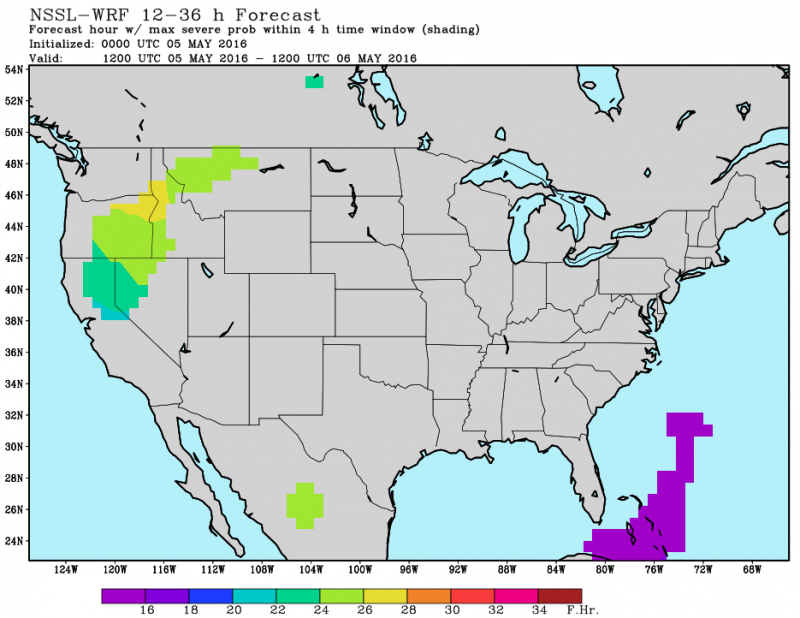 Through looking at these isochrones and attempting to draw them on a daily basis, we hope to understand if forecasters can use products like these for pinpointing severe weather occurrence to within a given four-hour window. We also hope to understand what questions and concerns forecasters have about using such a product, and if automated versions of these isochrones would be helpful. The first week has given us five chances to draw the isochrones, initiated hours of discussion, and clarified what aspect of the severe weather forecasting problem we’re capturing. Now, with that information in mind, we move on to week 2!