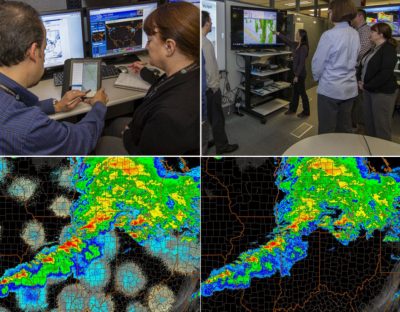 For the past two years, the FAA has been using NSSL’s Multi-Radar Multi-Sensor system to identify severe and hazardous weather that can affect air travel. The MRMS system merges data from multiple sources, intelligently integrates the information, and provides a detailed picture of the current weather. MRMS detects not only where precipitation is occurring, but also the precipitation type, intensity, and atmospheric characteristics. The system’s products are generated every two minutes, and include three-dimensional radar images that are useful to improving safety and efficiency in the National Airspace System.

MRMS was developed by NSSL researchers, who were awarded the Department of Commerce’s Silver Medal for science/engineering achievement in July 2015. The FAA’s Aviation Weather Research Program provided significant funding and technical support for the project, and NOAA’s National Centers for Environmental Prediction facilitated the system’s implementation into FAA systems.

“They actually put their first test system of MRMS in the [FAA’s William J. Hughes Technical Center],” said Steve Abelman, manager of the NextGen organization’s Aviation Weather Research Team. “We’ve had this relationship to do research on MRMS for the last seven or eight years. Now it’s an actual tool to improve the operational product.”

The FAA has expanded the geographical reach of MRMS, integrating radar networks from Alaska, Canada, the Caribbean, Guam, and Hawaii. System upgrades are scheduled roughly every six months, with future plans for radar in Mexico and the Cayman Islands. MRMS has also been used for icing and turbulence research, with potential benefits throughout the aviation industry.

In 2015, 53 percent of air traffic delays were attributed to weather, costing air carriers $1,400 to $4,500 per hour. Better forecasts allow air traffic planners and controllers to direct aircraft away from aviation weather hazards. The enhanced weather analyses provided by MRMS offer substantial benefits to both NAS efficiency and also passenger safety.