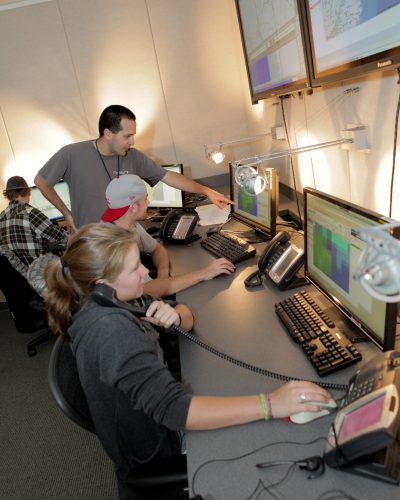 The NSSL/CIMMS Severe Hazards Analysis and Verification Experiment (SHAVE) are collecting hail, wind damage and flash flooding reports through phone surveys from now through mid-August.  This is the sixth year of the project, logging more than 29,000 hail reports, 5500 wind reports and 9300 flash flood reports since the project began.

SHAVE reports, when combined with the voluntary reports collected by the NWS, creates a unique and comprehensive database of severe and non-severe weather events and enhances climatological information about severe storm threats in the U.S.  Some NWS forecast offices use SHAVE data to assist in verifying their warnings.

Largely student led and run, the SHAVE team makes phone calls along the path of a target storm.  People who answer the calls are questioned about hail size, wind damage and flash flooding that occurred over the past 60 minutes.  The phone data is blended with radar information on Google Maps to create a database on the storm for research.

Because SHAVE leans heavily on students, it gives them rich opportunities for professional development and leadership.  It has also led to year-round undergraduate research assistantships and research projects for over half of the participants.  Between 2006-2011, 26 students have worked for SHAVE.