NSSL scientist Pam Heinselman will be a guest speaker during NOAA Heritage Week 2012 activities February 3-4 at NOAA headquarters in Silver Spring, Md.  She will be part of a panel on tornadoes, and give a short presentation on the development of science and technology that can improve the forecasting of tornadic storms.  Heinselman plans to discuss the polarimetric tornado debris signature on Doppler radar, rapid sampling of tornadic storms with Phased Array Radar, and the Warn on Forecast project.

The NOAA Heritage Week is part of Preserve America, a federal initiative that encourages and supports community efforts to preserve and enjoy our priceless cultural and natural heritage. 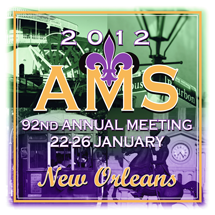 NSSL storm electricity expert Don MacGorman has been elected an AMS Fellow and will be honored at the meeting.

The NOAA Hazardous Weather Testbed Team, including NSSL’s Mike Coniglio and Jack Kain, will receive the Kenneth C. Spengler Award for bringing the government, academic, and private sectors together in a visionary, proactive, and exemplary manner to deal with the challenges posed by hazardous weather.

Presentations and poster topics include a new high-resolution forecast model, a way to use cloud properties retrieved from GOES in forecasts, a weather-adaptive system that can help forecasters detect and analyze severe weather, and evaluation results from forecasters participating in the NOAA Hazardous Weather Testbed.  New phased array radar research, techniques to solve radar problems, studies of cloudiness tendencies, and NOAA outreach at the National Weather Center are also on the agenda.

An NSSL researcher is serving on an expert panel about the future of dual-polarization radar research, and several NSSL staff will serve as session chairs.

NSSL will also host a booth at “WeatherFest,” an annual weather science fair open to the public.

NSSL lost a valued friend and employee last month.  We wanted to honor the significant contributions Richard Wahkinney made to NSSL.  The following thoughts were offered by Allen Zahrai and Doug Forsyth.

“I was evening electronics instructor at the Moore-Norman Vo-Tech School during the 80s. I met Richard when he enrolled in the program and started attending the first course in the series of five courses leading to technician certification. He was not sure if this was for him, much like many of my other students looking for direction and a career. I told him to wait until the second course to see if this was it. The second course involved some mathematics for alternating current theory and it happened to be the time when I usually lost a large number of my students. But I developed a special friendship with Richard. He had a gentle soul and wonderful personality, I spent much of our break times talking to him about Native American culture and his Comanche roots. I managed to motivate him to stick it out through the second course and he finally found that electronics was something he could get passionate about. He impressed me with his enthusiasm and dedication, and I recommended that we hire him at the Lab. He was an excellent technician, he built most of the hardware on our radar trucks. We’ll miss him tremendously.”  – Allen Zahrai

Richard Wahkinney was employed by the National Severe Storms Laboratory (NSSL) for 22 years.  Hired on September 18, 1989 as a Student Trainee (Electronics Technician) GS-4/1 under a CO-OP agreement with Moore-Norman Vocational/Technical School, he worked half-time and went to school half-time until his graduation in 1991.  Richard was an outstanding employee and student, completing his course ahead of schedule and was selected to the National Honor Society for Vocational/Technical Schools.  His final grade was an A+.

Before joining NSSL, Richard had graduated from Norman Public Schools in 1968.  After graduation, Richard worked in various construction and survey jobs and later attended the University of Oklahoma from 1985-1987.
In 1988, he married Eunice McCollem and started to attend Moore-Norman Vocational/Technical School (MNVT).  At the time, NSSL was looking at how we might backfill some technician positions. Allen Zahrai was a part-time instructor at the MNVT and had taught Richard.  Allen recommended us looking at hiring him.  As they say “the rest is history”.

Richard joined NSSL at a very active time.  He was involved in many, many changes to the NSSL radar systems during his 22 years.  In the early years, he helped install the dual-polarization capability on the Cimarron radar.  This also involved making the Cimarron radar remotely controlled and required his help to install a microwave link.  Richard grew to become the chief technician for the Cimarron facility and kept the radar in excellent working condition.  He also helped to collect data with this facility.

Richard was always willing to work on anything required to complete the NSSL mission from installing furniture, to cleaning up workspaces and warehouses or cleaning out the old Norman Doppler radar.  He attended many training programs in order to maintain our VCRs, computers, printers, RISC (Reduced Instruction Set Computer) workstations, overhead projectors, laser printers and monitors.  He was the only one certified at the NSSL in surface mount soldering that was used in fabrication of PC boards for use in the Research Radar Data Acquisition system, prototyping for the Open-RDA for the WSR-88D.

Richard was involved in several remodeling efforts that included the Storm Prediction Center area, the 2nd floor changes at NSSL, the WSR-88D building and Temporary buildings, the move to the old Armory facility and final move to the National Weather Center in 2006.

During his later years at NSSL, Richard helped modify the WSR-88D to become dual polarized, was instrumental in getting the 88D Transmitter mated to the Phased array system resulting in the only S-Band Phased Array Weather radar in the world.  He also helped fabricate and maintain the mobile X-Band dual-polarization Radar (NO-XP) and the mobile C-band dual-polarization radar.  Richard was an excellent machinist and thus provided many custom metal structures used for supporting the waveguides and feed-horn on the NO-XP.

Richard was an outstanding employee of few words, who never complained, but always got the mission accomplished.  He accomplished a lot in his short 22 years.  He will be missed.  He was certainly a credit to not only the National Severe Storms Laboratory, but to the National Oceanic and Atmospheric Administration, Department of Commerce and this Nation.  May he rest in peace, knowing that he helped make the National Severe Storms Laboratory what it is today.”  -Doug Forsyth