Is it raining, snowing or hailing where you are? Tell us about it! Report the weather at your location any time on the mPING app to help NOAA researchers and forecasters, and join citizen scientists all around the world participating in Citizen Science Days through May 20.

Downloadable to your smartphone, mPING (Meteorological Phenomena Identification Near the Ground) is a free application that allows users to submit information about the weather to NOAA’s National Severe Storms Laboratory. Reports are immediately archived into a database at NSSL, and are displayed on a map accessible to anyone. 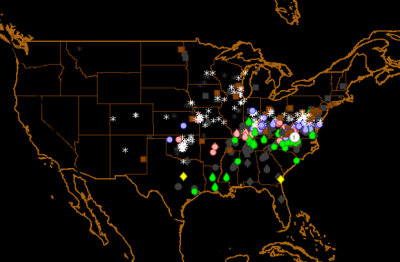 To use the app, reporters select the type of weather that is occurring, and tap “submit.” The anonymous reports can be submitted as often as every 30 seconds.

The main goal of mPING is to provide more information to researchers and forecasters about the weather affecting the public. As a bonus, that very same public can see these reports! Weather radars cannot “see” at the ground, so mPING reports are used by the NOAA National Weather Service to fine-tune their forecasts.

Reports from mPING are also helping NOAA researchers in a variety of ways, including to develop new radar and forecasting technologies and techniques, said Kim Elmore, research scientist with The University of Oklahoma Cooperative Institute for Mesoscale Meteorological Studies working at the NOAA NSSL.

The first goal of mPING was verifying the type of precipitation detected by new radar technology. But, data from mPING proved useful for things not originally envisioned. While checking the accuracy of reports, Elmore and his team learned more about the scale and variability of freezing rain.

Digging a little deeper, we know that freezing rain can exist in only a very narrow set of environmental conditions. If the air near the ground gets only a little colder, the raindrops will freeze before they reach the surface and be reported as ice pellets. If conditions warm up only a degree or two near the ground, the temperature is no longer below freezing and there can be no freezing rain.

Reports from mPING also helped the team learn about one of the newest numerical weather prediction models called the Rapid Update model, or RAP, which is used for short term weather prediction. Data from mPING showed the old version of RAP did not properly identify ice pellets. Once the model developers learned about this, they immediately made changes to better forecast ice pellets.

For one winter season, NOAA’s Earth System Research Lab and the

operated the old version (but with the ice pellet fix) and new RAP models at the same time. This was a perfect perfect opportunity to see how much better the new RAP system handled ice pellets. To test this, mPING reports were compared to RAP model forecasts.

“It turns out, ice pellets are reported far more often than the model forecasts them,” he said. “We reported on the fact the new version of RAP helps some — it is a small but statistically significant improvement.”

The mPING app was developed through a partnership between NSSL, the University of Oklahoma and the Cooperative Institute for Mesoscale Meteorological Studies and was included in Scientific American’s list of 8 Apps That Turn Citizens into Scientists. For more information on the application, or to watch a short video about it, visit http://mping.nssl.noaa.gov/.

Scientists will continue to look for new ways to use the mPING data in their research, Elmore said. So keep those reports coming!