The NOAA Hazardous Weather Testbed,  a joint project of the National Weather Service and the National Severe Storms Laboratory, is buzzing with activity again as the Experimental Warning Program focuses on its second of three years of testing probabilistic hazards with Hazard Services software. The objective is to improve severe weather warnings.

“When we issue warnings at the NWS it shows up as a polygon box,” Garfield said. “When a tornado passes, you’re still in the box and you may be unsure if you can leave your shelter. That’s an issue. Everywhere within the polygon has equal warning even though it’s not equally probable everyone is getting that severe weather.”

One focus of the EWP’s annual Spring Experiment is the Hazard Services – Probabilistic Hazard Information experiment, HS-PHI. The testbed allows users to test technologies and methods while providing input to see if it is ready to be implemented in forecast offices. The HS-PHI experiment is designed to test forecasters’ ability to provide probabilistic information about severe storms utilizing new software that is being designed to  be used in the future by the NWS. 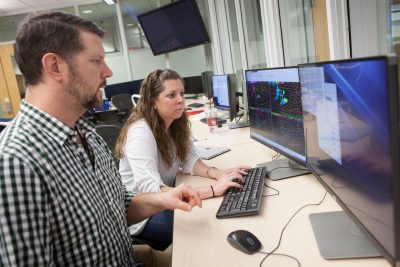 This experiment is part of the National Severe Storm Laboratory’s Forecasting a Continuum of Environmental Threats, FACETs, an initiative aimed at improving the communication of hail, wind, and tornado hazards to save lives and property.  Instead of a single polygon, in the FACETs paradigm forecasters would create probabilistic hazard information “plumes.” New types of severe weather warnings can be derived from the plumes. which new types of severe weather warnings can be derived.  These include the traditional warnings that the public receives today, to special warnings for specific users that have a lower tolerance to severe weather and require longer lead times to take action.

“Imagine you’re in a storm and the probability of severe weather at the center of the storm is 100 percent,” Garfield said. “There’s a circle around that 100 percent area but right outside there, it is 90 percent likely in the direction the storm is moving and then further out it may go down to 50 percent as it gets further away because we don’t know if it will weaken.”

As the storm moves, the circle around it moves, too. When that circle moves away from a location,  to know when the storm has passed over their location and they are able to come out of shelter.

“In the past, when the forecaster issued a polygon, the storm may change direction and the forecaster did not have any mechanism to update that without creating some confusion,” Garfield said. “But, with the probabilistic hazard information plumes, we can actually have that information and modify the plumes in real-time.”

For officials with responsibility for weather sensitive populations, such as festival organizers and hospitals, this means more lead time when severe storms threaten and better information to use in planning for severe storms.

“The whole idea is to provide as much information as possible,” Garfield said. The purpose of HS-PHI is to develop and test a tool forecasters can use to convey the threat. The first version of this prototype was evaluated in the HWT in 2014.  The features of the prototype have been incorporated into the NWS version, and testing of this operational version, HS-PHI, is in its second year.

“As you might imagine, if you have one of the plumes, it would be really hard to always manually draw those probabilities in real-time, particularly if you have several severe storms going on at once,” Garfield said. “You won’t have enough time to manually resize all of these swaths. They’ve been trying to figure out the best machine automation versus human interaction. What’s the best algorithm used along with how much should humans actually tweak in the system?”

The EWP is testing experimental methods for improving the communication of severe weather threats, such as hail, wind, and tornadoes, using new software designed for the computer workstations that NWS meteorologists use today to forecast the weather.

This year, the HS-PHI Experiment is testing the probabilistic hazard information concept in a way that simulates how NWS forecasters would actually use it, within the Advanced Weather Interactive Processing System (AWIPS) software used by the NWS. NWS forecasters and human factors experts will evaluate the software design using several severe weather scenarios.

HS-PHI was developed by the National Severe Storms Laboratory with the National Weather Service and OAR’s Earth System Research Lab, and is in its second year of evaluation.