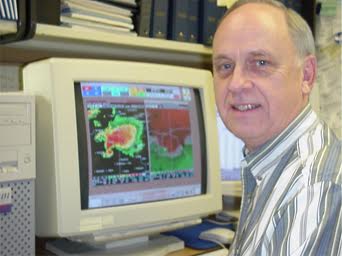 Rodger A. Brown is retiring after 51 years as a research meteorologist, including 46 years of federal service with NOAA’s National Severe Storms Laboratory in Norman, Oklahoma.

Brown started at NSSL on the same day NOAA was formed, October 3, 1970, just as Doppler weather radar was becoming operational. He and his colleagues were interested in using this new resource to learn more about how severe storms develop. On May 24, 1973, Brown was working in the newly built, experimental Norman Doppler Radar when a tornado devastated the small town of Union City, Oklahoma. Working with former NSSL researcher Les Lemon, who monitored the surveillance radar, Brown and his team determined where to scan the storm to collect the data they would need.

The following morning, Brown surveyed the damage in Union City with fellow researchers, including Don Burgess, retired NSSL research meteorologist who is now with the University of Oklahoma’s Cooperative Institute for Mesoscale Meteorological Studies.  Brown recalls coming to grips with the magnitude and severity of the storm. “I think that’s the first time we realized the extent and how devastating the tornado was,” Brown said.

In the following weeks, Brown, Burgess, and Lemon pored over the data. This was the first time they had visualized the entire lifecycle of a tornado. They discovered the existence of a Tornadic Vortex Signature, a measurement of circulation aloft provided by the Doppler radar that indicated a tornado may be forming. This important warning device is still used today by NOAA’s National Weather Service to issue more timely severe thunderstorm and tornado warnings.

Brown earned his bachelor’s degree in earth sciences from Antioch College in Yellow Springs, Ohio, in 1960. He received his master of science degree. in geophysical sciences from the University of Chicago in 1962, and his Ph.D. in meteorology from the University of Oklahoma in 1989. During his career, he has been an active member of the American Meteorological Society, the National Weather Association, the American Geophysical Union, Sigma Xi, and England’s Royal Meteorological Society. He has held elected offices in the NWA and served as committee chairs and conference chairs for both the AMS and NWA.  Outside of work, he enjoys reading, making Native American style flutes, and serving as a Boy Scout leader. He is looking forward to spending more time with his family in retirement, including his wife, three children, and five grandchildren, as well as volunteering with various weather-related organizations in Norman.