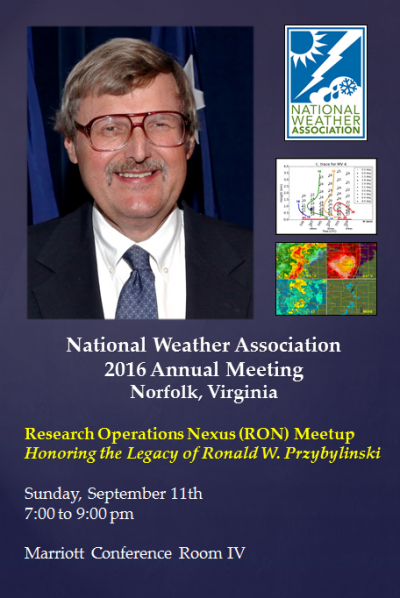 Many members of the NWA fondly recall longtime associate Ron Przybylinski, a luminary in operationally-focused severe weather research for more than a quarter century. When Ron passed away in March 2015, a number of friends and colleagues within our association sought to honor his legacy of research-to- operations integration. The result was the first Research Operations Nexus (RON) Meetup, held at the 2015 NWA Annual Meeting in Oklahoma City in memory of Ron and his work.

The first RON meetup was a special session on Sunday night at the start of the conference, bringing together researchers and operational forecasters in a forum where they could discuss topics of mutual interest. Nearly 70 meteorologists participated in the event, breaking into groups to discuss topics like communicating uncertainty and impacts, flash flooding and heavy precipitation, use of social media in operations, and fire weather support. The sessions were structured to connect challenges being faced by operational forecasters with work being done by the research community, and to start collaborative relationships that might continue in the future.

Given the success of the RON in Oklahoma City, a second meetup has been scheduled for the upcoming 2016 NWA Annual Meeting in Norfolk. This year’s event will be held Sunday, September 11th, from 7 to 9 pm in room Marriott IV of the conference hotel. We hope you can and will make plans to attend. If you have suggestions for topics to be covered or would like more information, please contact Greg Stumpf at Greg.Stumpf@noaa.gov.