Visualization of a simulated long-track EF5 tornado embedded within a supercell thunderstorm
Authors: Leigh Orf – Cooperative Institute for Meteorological Satellite Studies, University of Wisconsin, Madison, WI, USA; Robert Wilhelmson – National Center for Supercomputing Applications, Urbana, IL, USA; Louis Wicker – National Severe Storms Laboratory, Norman, OK, USA
Journal: Parallel Computing
Published: July 2016
Significance: Tornadoes are one of nature’s most destructive forces, creating winds that can exceed 300 miles per hour. The strongest tornadoes are produced by supercells, long-lived thunderstorms characterized by a persistent rotating updraft. The sheer destructive power of the strongest class of tornado (EF5) makes these storms the subject of active research. However, very little is currently known about why some supercells produce long-track (a long damage path) EF5 tornadoes, while other storms in similar environments produce short-lived, weak tornadoes, or produce no tornado at all. A breakthrough, ultra-high resolution simulation using the Univ. of Illinois Blue Waters supercomputer demonstrated a supercell producing an EF5 tornado lasting nearly two hours. New computational approaches were required for the simulation at these resolutions and for the visualization of nearly 100 TB of model output. This paper reports on the visualizations illuminating the simulation, which elucidate three-dimensional features thought to play an important role in creating and maintaining the tornado vortex.
Important Conclusions: Volume rendering of vertical vorticity (a measure of spin around a vertical axis) reveals a complex, fascinating turbulent flow regime in the vicinity of the tornado as it forms, grows, and churns for over 90 minutes. Animations of vorticity reveal the presence of dozens of shallow, curved vortices that form along the forward flank gust front and feed into the tornado vortex. The anticyclonic vortices, rather than being absorbed into the tornado’s circulation, tend to maintain their integrity, but are swept around the outer circulation of the tornado, often completing one or more full cycle of rotation while concurrently being tilted and lifted upwards by rising air. 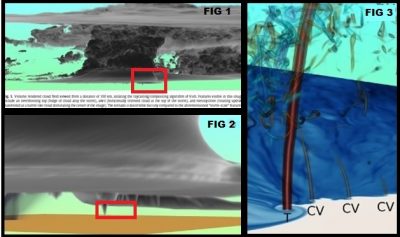 Fig 1. Volume rendered cloud field showing an overshooting top (bulge of cloud atop the storm), anvil (horizontally oriented cloud at the top of the storm), and mesocyclone (rotating updraft manifested as a barrel-like cloud dominating the center of the image). The tornado is discernible but tiny compared to the aforementioned “storm-scale” features. Fig 2. Tornadogenesis, indicated by a descending condensation funnel. Fig 3. Shortly following tornadogenesis, the tornado (T) is visible as an erect tube of cyclonic vorticity (a measure of spin around a vertical axis), while three shallow cyclonic vortices (CV) are visible shortly before merging with the tornado.