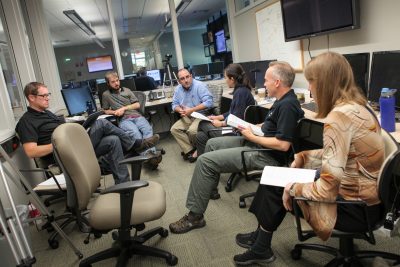 This week, during the height of severe weather season, a diverse group of scientists is coming together in Norman, Oklahoma, to improve how severe weather information is conveyed to the public. They are gathering in NOAA’s Hazardous Weather Testbed to focus on FACETs-related research and significant collaborative efforts.

The HWT is a joint effort between the National Severe Storms Laboratory, Storm Prediction Center, and the National Weather Service, along with OU’s Cooperative Institute for Mesoscale Meteorological Studies, that aims to develop, test, and evaluate forecast and warning techniques. Each year, the HWT conducts two programs during the spring to review emerging ideas and answer the question, “What do forecasters need?” The Experimental Warning Program and Experimental Forecast Program draw as many as 60 researchers and forecasters together for six to eight weeks from April to June.

While experiments formally began earlier this spring, this week is particularly noteworthy because many aspects of the future warning paradigm have been brought together for the first time. NWS forecasters, emergency managers, broadcast meteorologists, social and behavioral scientists, and research meteorologists are looking at NWS Hazard Simplification concepts, new science (e.g., Warn-on-Forecast model guidance, lightning prediction tools, storm-scale prediction, etc.), and more. With all of these groups involved in the FACETs experimental phase, researchers hope to gain insight on how they might devise a better warning system for the entire nation.

Additionally in the HWT, scientists are examining real-time forecasts with an early prototype Warn-on-Forecast system known as the NSSL Experimental WoF System for ensembles (NEWS-e). Early results appear promising, and researchers are enthusiastic about future prospects. NEWS-e’s forecasts for the severe weather events on May 8-9, 2016 were remarkably good.  On both days, the forecasts identified a number of dangerous storms with more than 20 minutes of lead time. The NEWS-e system now combines models from NOAA’s Global Systems Division and NSSL for the first time. This marks a significant milestone in the collaboration on storm-scale numerical weather prediction between the two labs.

For more information about the HWT: http://hwt.nssl.noaa.gov/.