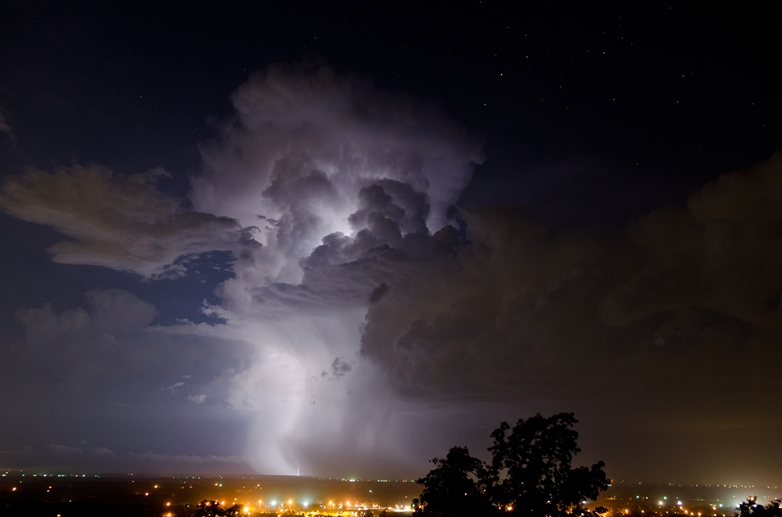 Kristin Calhoun (NSSL/CIMMS) will give an invited webinar to National Weather Service meteorologists and hydrologists on April 1, 2015, about current lightning prediction products in research and development at NSSL. Calhoun will also discuss the NOAA Hazardous Weather Testbed (HWT) and how forecaster feedback is used to evaluate and refine the products.The webinar is part of a monthly series for NWS Science Operations Officers and Development and Operations Hydrologists that benefits operational forecasters, highlights research to operations transitions, and supports NOAA’s work to evolve the National Weather Service.

It has long been theorized, and in limited studies demonstrated, that the use of total lightning detections and associated derivative products could have positive impacts on the warning process for thunderstorm events. Two total lightning algorithms to potentially improve short-term prediction and warnings of severe storms have been evaluated in the Hazardous Weather Testbed (HWT) in Norman, Oklahoma.

In severe storms, rapid increases in lightning flash rate, or “lightning jumps,” typically precede severe weather, such as tornadoes, hail and straight line winds, at the surface by tens of minutes. The GOES-R Geostationary Lightning Mapper (GLM) will allow the use of continuous total lightning observations and the lightning jump concept operationally throughout the United States. A total lightning jump algorithm (LJA) that can be used by NWS forecasters to enhance situational awareness and diagnose convective trends was evaluated in the HWT as part of the experimental warning program in 2014 and will be evaluated again in 2015.

In 2014, 18 NWS forecasters visited the HWT during a period of six weeks, 21 July-29 August, for a full product evaluation. The forecasters completed a series of six two hour weather-warning simulations of marginally severe storms to high-impact tornadic events throughout the United States. The 2015 HWT experiment will build upon the initial evaluation in 2014, including enhancements based on forecaster feedback.