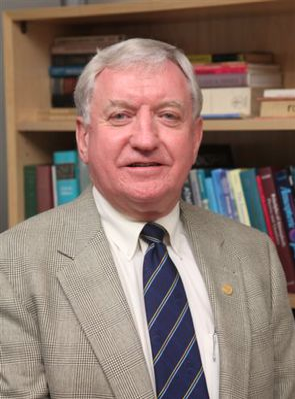 In Memory of Dr. Peter J. Lamb, Director of the Cooperative Institute of Mesoscale Meteorological Studies at the University of Oklahoma and George Lynn Cross Research Professor;  June 21, 1947 – May 28, 2014.

Dr. Lamb’s basic research focused on the physical and dynamical processes responsible for regional climate and its short-term fluctuations (intraseasonal, interannual, decadal), especially for Northern Hemisphere Africa and North America east of the Rocky Mountains. He also was concerned with the applied issue of how such basic research can benefit society.  Lamb authored or coauthored more than 100 peer-reviewed publications, which have received approximately 4,000 and 5,100 citations, respectively, according to the Web of Science and Google Scholar. He was the founding Chief Editor of the Journal of Climate (1989-1995). Lamb was a member of the Council (2011-2014) and Executive Committee (2012-2014) of the American Meteorological Society.

“Pete Lamb was an extraordinary scientist; he was deeply and actively concerned about meteorology and climate in the developing world, and he was a warm and caring friend,” said Berrien Moore, director of the National Weather Center. “We had a wonderful discussion about the future of the National Weather Center on the 27th of May, and his voice and thoughts still live with me.  I will miss him always.”

Since 2011, Dr. Lamb served as one of three joint institute advisors to the NOAA Oceanic and Atmospheric Research (OAR) Senior Research Council. He provided insight and advice to NOAA leadership on the role of joint institutes in the agency’s research and development portfolio.  He championed government – university cooperation for the benefit of improving NOAA products and services.

“Peter was a brilliant scientist, an advocate for the important work that we all do, and a friend,” said Craig McLean, Acting Assistant Administrator for Oceanic and Atmospheric Research.  “Our community is remarkably smaller today, as his presence and good will have been so large.”

He is survived by his daughter, Karen Deborah (Jeffrey Lockwood); his son, Brett Timothy (Kimberly Holt); and his grandson, Xavier James. A memorial service will be held in the Atrium of the National Weather Center, 120 David L. Boren Blvd., Norman, Oklahoma, on June 7, 2014, at 2 p.m. He will be buried alongside his parents in Nelson, New Zealand, in December 2014. In lieu of flowers, the family requests a donation to be made to the Ethembeni School, a boarding school serving 300 physically disabled or visually impaired students in the KwaZulu-Natal region of South Africa. Please visit www.ethembenischool.co.za to donate and reference “in honor of Peter James Lamb” in the comment section.