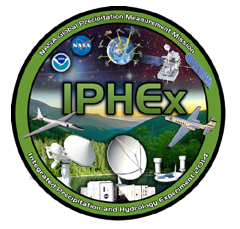 Debris flows caused by rainstorms are a frequent and devastating hazard in the Southern Appalachian Mountains of North Carolina.  Through June, NSSL is partnering with the Integrated Precipitation and Hydrology EXperiment (IPHEX) to understand warm season precipitation caused by complex terrain in the area, and the relationship between precipitation patterns and hydrologic processes.

Current precipitation estimates are significantly poor in the inner mountain region of the Southern Appalachians where National Weather Service WSR-88D radar data is used in hydrologic forecast models.  NSSL researchers are collecting data with the NOAA X-Pol (NOXP) mobile radar in the Pigeon River watershed basin of North Carolina until mid-June to test the role of gap-filling radars to better define rainfall runoff for these models.

Since 2007, a high elevation tipping bucket rain gauge network has been recording observations in the Pigeon River Basin. Instruments that measure microphysics have also been used during intensive observing periods in this and surrounding river basins during different seasons, focusing on ridge-ridge and ridge-valley variability. These observations have helped define the variability of rainfall intensity and accumulation at scales ranging from annual to daily.

So far, researches have discovered the importance of light (<3 mm/hr) rainfall as a baseline freshwater input to the region, and that the active depth of the atmosphere varies considerably in space from ridge to ridge.

Results from the modeling work have identified coalescence as a driving process in warm light to moderate rainfall. The localized importance of the region’s persistent fog interacting with low level clouds has also been identified. The fog and cloud interactions intensify and even trigger precipitation events that are often experienced only at high elevations and contribute significantly to the yearly water budget in the region.

The data gathered by NSSL will help researchers improve the accuracy of models used to predict flash floods and debris flows.