One of the reasons that we started this blog was to provide basic information on severe weather and its impacts.  Frequently, we get questions along the lines of “What’s the average X per year?” For many different “X”es, this is not as easy of a question as it might appear.  In large part, this is because many of the things we deal with have large trends in them (severe weather reports per year), so that the “average” depends on how far back you go in the record.  In order to make it easy for people who want the data to get the answer they need, we hope to put some of those numbers online here.

The first dataset is the number of deaths per year from tornadoes in the United States. The National Weather Service archive goes back to 1950. Brooks and Doswell (2002) discussed the long-term history of tornado deaths, drawing on the work of Grazulis (1993) (Grazulis, T. P., 1993: Significant Tornadoes, 1680-1991. Environmental Films, 1326 pp.). Reasonably reliable estimates of deaths per year can be made back to about 1875 by using the Grazulis data.

The Brooks and Doswell paper had a graph of the annual death toll normalized by population of the US through 2000.  Here is an updated version (through 2008) of that figure, showing that the death toll per million population appears to have leveled off in the last decade or so.

The purple points are the annual death rates, the red line is a simple smoother, the solid black line is a long-term trend in two sections (1875-1925, 1925-2000) and the cyan lines are estimates of the 10th percentile and 90th percentile from 1925-2000. Brooks and Doswell (2002) have an extensive discussion of the record and its possible implications. 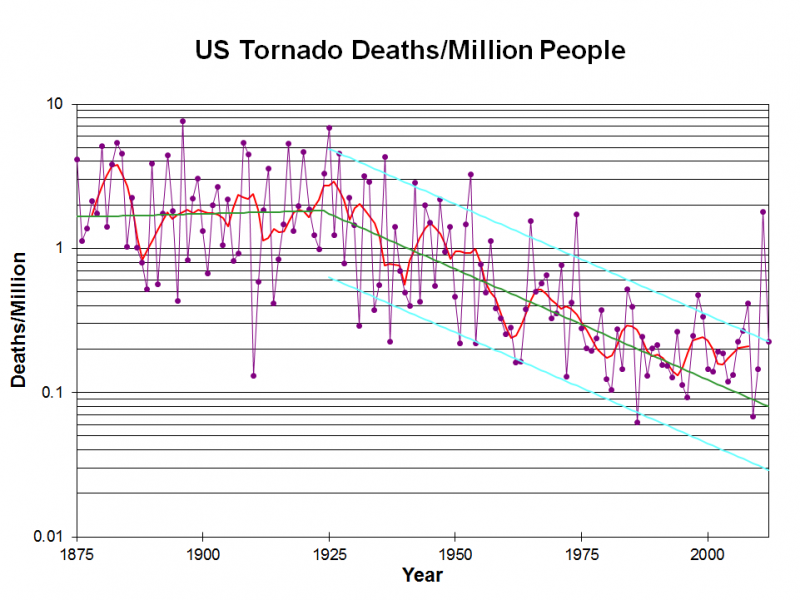 At the end of this post, we have a table of the annual death tolls going back to 1875 (1875-1949 from Grazulis, 1950-2008 from the National Weather Service.)  Although the data represent our best understanding at this time, it is possible that the numbers could change, if additional information was found.  Occasionally, it’s discovered that a fatality associated with a tornado was missed or double-counted. We’ll correct such entries if we find about about them, but that will likely be a rare event.  The death tolls are for direct deaths, i.e., someone killed directly by the impact of the tornado.  It does not include indirect deaths, which might not have occurred if the tornado had not happened, but the tornado was not an immediate cause.  Examples of indirect deaths that have occurred include a heart attack upon seeing damage to a neighbor’s house, falls when going to shelter, and a fire caused by a candle lit when the power went out after a tornado.