Sun strobes are an everyday occurrence for most operational weather radars. If you check out our real-time multi-radar products around sunrise or sunset, you will most certainly see sun strobes occurring at a number of radar sites. Obviously, sun strobes can be quite problematic for algorithms working with radar data, and must be removed.

Sun strobes have a few unique characteristics that allow them to be automatically detected. Primairly, sun strobes typically occupy an entire radial, and values in the gates of the those radials monotonically increase as you move farther away from the radar. With these characteristics in mind, sun strobe removal in w2qcnn and w2qcnndp had been performed by determining if for a given filled radial, the correlation between the values in the gates and the gate numbers exceeded some threshold (The threshold is defined and configurable in w2config/qcnn/modules/SunStrobe.xml. By default, it is set to 0.90).

This method generally does a very good job of detecting and removing sun strobes.  However, consider the case of tropical rainfall, pictured below. There are many radials in which all of the gates are filled. There is a small probability that some of the filled radials are monotonically increasing, and will trip the sun strobe checking mechanism by random chance. In fact, that very thing happens here.

Once a sun strobe was detected, the algorithm then began to examine neighboring radials with a slightly less stringent check, and eventually a large fraction of the radials were deemed bad, and the entire scan was thrown out. That is obviously not an acceptable solution, so we developed an additional check to determine if what is being detected is actually a sun strobe. We did this by examining plots of the radials that were considered “bad” by the aforementioned sun strobe check in the cases of both actual sun strobes and weather that was misclassified as a sun strobe. 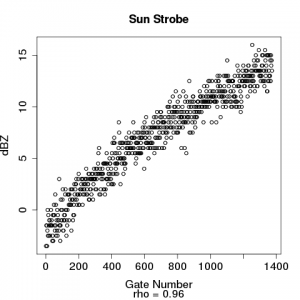 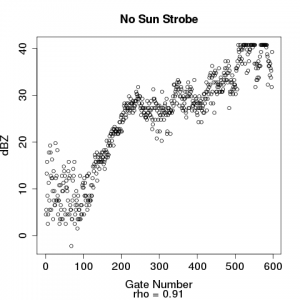 As you can see, the correlation for both the sun strobe and the misclassified weather are quite high (> 0.90), thus tripping the sun strobe check. However, you also notice a few distinct differences in these plots. Specifically, the slope of the best-fit lines are quite different (by an order of magnitude or so). It is this difference that allows the improved algorithm to confirm that it is actually detecting a sun strobe.

So now, if w2qcnn or w2qcnndp detect that a radial is nearly full, and the values in the radial are monotonically increasing, it then performs this additional check to see if the slope is above some threshold. If it is, the radial is deemed a sun strobe and thrown out. Otherwise, the radial is kept. From that point on, the algorithm performs as it did previously. Work still needs to be done to determine exactly what the best slope threshold should be, but it too is configurable inside of w2config/qcnn/modules/SunStrobe.xml.