The VORTEX-SE field program, “Meso18-19” is conducting its fourth Intensive Observing Period across the Southeast. This began at 6 AM today and will continue into Wednesday night. Soundings are being launched from 13 NWS sites, and 10 sites operated by universities and NOAA labs, every six hours. Additional more detailed observations will kick in across northern AL if the system moves that far north.

There is a warm front just offshore in the Gulf of Mexico. The suite of forecast models have varying solutions regarding how far inland this warm front will move tonight and tomorrow. The air to the south of the front has enough CAPE to support storms with low-level updrafts suitable for some tornado potential. To the north, the air is very cool and, based on our present understanding, tornadoes are nearly impossible.

The low-level shear to the north of the warm front is immense because of the temperature contrast between the two airmasses. Of more concern, though, will be the shape and length of the low-level hodograph in the warmer, humid air once the front moves inland.

These sorts of situations, with great uncertainty about the return of warm humid air off of the Gulf of Mexico, are not uncommon in the Southeast. In our previous years’ field campaigns, this uncertainty made it difficult for the scientists to anticipate the likelihood of storms, and their tornado potential.

VORTEX-SE includes research into how we can most effectively communicate about multiple ongoing hazards… a common situation in the Southeast. This event is no exception, with heavy rainfall and possible associated flash flooding a real threat across portions of the region. This event also illustrates one of the difficulties of threat perception: it is February, and temperatures across the region are predominantly in the 40s with cold rain. This doesn’t feel like tornado weather, and if the tornado threat does develop tonight or tomorrow, it may only “feel like” tornadoes for a short time before they occur.

We may wrap up our observations for this case a bit earlier than we normally would in order to give all of the participants time to rest and plan for another IOP on Friday and Saturday. Current models are showing a potent setup, with tornado potential across AR, northern MS, TN, and northern AL. Of course, this forecast will change (this blog is NOT an official forecast!). But in Meso18-19, we must decide on IOPs at least 48 hours in advance to give all the participants adequate time to prepare, and so for a Friday morning start… today was decision day. Stay tuned. 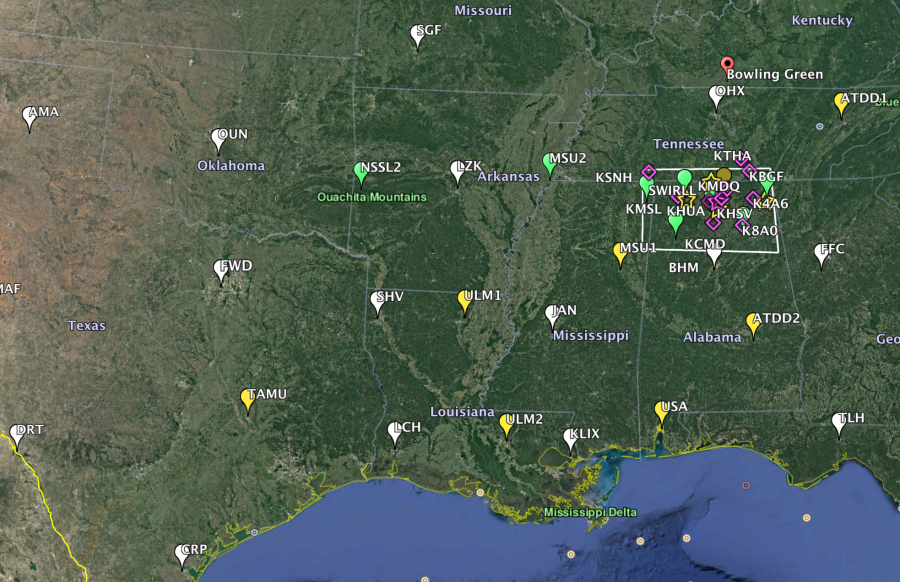 About 1.5 hours ago, several cells exhibited decent rotation in NE TX. These persisted for about 45 min, and then weakened. The mobile sounding launched by U. Louisiana-Monroe, just east of Shreveport, looks like it would support severe storms, but instead we are in a downhill trend and a lull. The atmosphere is always interesting!

If I get a chance and activity picks up, I will post another update.

We will be using a special ad hoc subdomain today to maximize our radar data collection on the kind of weather that is most interesting. This decision is based on the logistics of our deployment… this is the last mission day for the NOAA P-3 aircraft, and if we wait for the interesting weather to get to the Monroe subdomain, the P-3 will no longer be able to work it. So we are deploying the two University of Oklahoma SMART-Radars to northwest Louisiana, to operate in conjunction with the Shreveport NWS WSR-88D. The NOAA P-3 aircraft will operate over this subdomain.

(Thunder in Norman as I write… a welcome sound!)

We expect supercells or clusters of supercells today in the subdomain, with the possibility of tornadoes occurring within our radar area.

The radars and aircraft are expected to be operating sometime around 3 PM.

STATUS: Down, but an IOP is likely on Friday 13 April.

The next major wave to impact the SE US will be moving into the area on Friday. We expect conditions possibly supportive of tornadic supercells or a QLCS Friday afternoon and night, but the location is not very certain. We will probably use the Monroe LA subdomain, but because this is the last possible mission day for the NOAA P-3 aircraft in VORTEX-SE this year, we may set up an ad hoc subdomain further we toward Shreveport if that’s where the weather takes us.

Mobile radar deployment is underway in the NE Louisiana subdomain, with scanning beginning about 2:30 PM. The NOAA P-3 research aircraft will be taking off around that same time, arriving in the subdomain area around 3:30 PM. Mobile and fixed soundings will be launched this afternoon.

Our expectations are very much in line with the SPC Day1 outlook. There may be isolated or scattered storms in the “warm sector” across Louisiana by mid-afternoon. These will be very hard to predict, but we will study any that happen in our subdomain. They may have rotation, but it’s not clear how persistent individual cells will be. The CAM forecast models don’t seem to be depicting long-lived supercells for reasons unknown.

A more linear, more predictable band of storms will organize in far southern AR by mid-afternoon, and sag southward through the evening hours. It should be near the AR/LA border around 3-5 PM, and near Monroe by 5-7 PM. Initially, this band may not be dominated by cold outflow, and so there is some potential for non-classic tornadoes during its first few hours. These tornadoes that are not associated with classic, isolated supercells are a special interest of VORTEX-SE. Toward evening, the band will likely accelerate south and be dominated by cold outflow, with diminishing tornado potential.

So we will probably have a good case to test new ideas about combining multiple radars of various types to obtain better characterization of the flow features in the storms that may promote or reduce tornado potential.

The U. Oklahoma SMART-Radars will be moving to the Monroe LA area shortly, and the P-3 will likely have an afternoon-evening flight tomorrow. We expect a near-certainty of strong convection in the U. Louisiana-Monroe subdomain, and this should prove useful for honing our ability to produce wind analyses based on a mix of multiple fixed, mobile, and airborne Doppler radars. At this time, it appears the main band of convection will pass through our subdomain between about 3-10 PM. We expect this main band to be elevated, with rotating updrafts but only slight possibilities of tornadoes. Of course… expectations can change, and reality has a way of telling us what we should have expected.

Mobile assets from the University of Alabama-Huntsville and the University of Oklahoma are moving toward the western part of northern AL. This is the western end of the relatively open Tennessee Valley area where we can operate mobile Doppler radars effectively. The NOAA P-3 aircraft with Doppler radars and a Compact Raman Lidar for boundary layer profiling will be taking off at 2 PM, with an initial target area in eastern AR.

We expect potentially tornadic supercells to form in the NE part of AR up toward southeast Missouri in the mid-afternoon. Activity will organize into a QLCS squall line during the late afternoon, and race eastward across northern MS and northern AL, with the possibility of a tornado or two, before weakening as it approaches northeast AL.

This will be a one-day operation, with the next possible active weather toward the end of the week.

The NOAA P-3 scientists from NSSL, and the University of Oklahoma SMART-Radar crews, are on their way to the Huntsville AL area for operations tomorrow.  This will likely be a one-shot event.  As of midday today, we are anticipating a QLCS (squall line) system to pass through the northern AL area during the evening on Tuesday.

There are a couple of factors that reduce our confidence in tornadoes:  the low-level wind profile has a weakness at about 2-3 km above the ground that we typically do not see in tornado situations.  And the moisture may not be especially rich and deep near the ground.  If the near-ground relative humidity is low, there will be more evaporation of rain and colder outflow, diminishing the likelihood of the near-ground updrafts thought to be important in tornado production.  But it’s always good to be proven wrong… if our knowledge were perfect, there would be no need for VORTEX-SE.

Right now it looks like a another chance of operations toward Friday, and then perhaps a better chance around Monday of next week.