Our fifth Intensive Observing Period of this cool season began at 6 AM this morning with special sounding launches from ten sites operated by universities and NOAA labs. The information from these soundings is going to be valuable as an intense low pressure system develops in the Plains later today. In collaboration with the NWS, VORTEX-SE will perform special soundings every six hours through 6 AM Sunday morning. By Sunday morning, the cold front with this particular weather system will have swept most of the way out of our observing domain. These are the sounding sites that are being used: 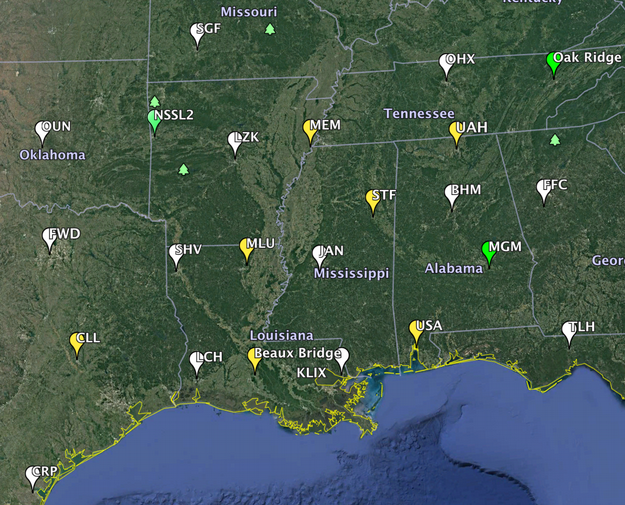 As this weather system sweeps across the Southeast, it looks like the storms will have the potential to produce tornadoes. Right now, the models show the greatest threat extending across northern LA and southeast AR, through the northern half of MS, and into western TN and northern AL. The severe weather should develop around midday Saturday, and move quickly northeast to AL and middle TN by late Saturday evening. There may be a few relatively isolated supercells ahead of the main band of activity, and then the main band of activity will probably be comprised of fairly tightly spaced supercells. At 11:30 AM CST the SPC issued this outlook: 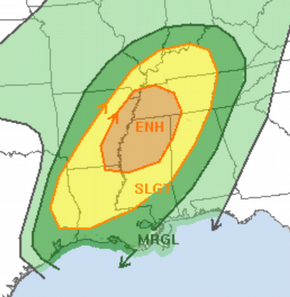 Some of the uncertainties with this system include the expected tornado intensity, the northern and southern extents of the threat, and how late into the evening on Saturday (and how far north and east) the activity will persist. Often with these systems that appear to have a pretty high threat, there is some unexpected or poorly understood aspect that ends up limiting the threat. These limits to the threat are as important to understand as the factors that come together to produce the threat.
An additional complication with this system is the tremendous amount of rain and consequent flooding that has occurred, and will continue, across northern AL, TN, northern MS, and adjacent regions. These “multiple-hazard” events are not unusual in the Southeast, and complicate the work of all involved in the weather enterprise.