The tragic flash floods in Tennessee on August 21-22, 2021 unfortunately took the lives of 20 people, as record rainfall and swift waters carried away homes and vehicles. Analysis of the event from operational NWS forecasters noted the extreme precipitation totals within the MRMS system and how its forcing into the FLASH system translated to products signaling the potential catastrophic nature of this event.

Starting with the operational MRMS dual-polarization QPE accumulated for 24-hours, the analysis of 21 August showed a well correlated comparison to both hourly HADS/MADIS gauges as well as daily CoCoRaHS gauges. There was some slight underestimation with accumulations > 6.0 inches, yet the two gauge observations near the highest accumulation totals were well matched to the MRMS QPE (Fig. 1). MRMS QPE for the 24-hour period ending on 1200 UTC 22 August showed an overestimation bias with accumulations < 2.0 inches, but the overall data was also well correlated (Fig. 1).

Knowing that the radar-based QPE performed well, one can get a representative analysis with the FLASH product suite without having to worry about QPE biases. The different FLASH products showed a classic signal for a catastrophic event (Fig. 2). The QPE-to-FFG ratio exceeded the guidance needed for bankfull conditions on small channels by a factor of four or more. The average recurrence internal easily maxed out with a 200-year return period, notably for accumulation periods from 3 to 24 hours. The CREST maximum unit streamflow values were also off the chart, signifying the potential for extreme flash flooding.

One additional evaluation of the MRMS product suite with the Multisensor QPE (MSQPE) product yielded a third notable result: 3) the performance of the MRMS dual-polarization synthetic QPE was similar to that of the MSQPE, especially for the 24-hour accumulation ending 1200 UTC 21 August (Fig. 3). The bias ratio and correlation between the dual-polarization QPE and MSQPE products were nearly identical on August 21, while there was a reduction in the MAE and RMSE statistics. The MSQPE scheme for August 22 improved all statistics and helped mitigate the overestimation bias seen east of the main precipitation event.

The final storm-total precipitation yielded a widespread area of rainfall exceeding six inches, with a localized area of 16-20 inches (Fig. 4). The MSQPE values near McEwen, TN matched well with the preliminary rain gauge storm total of 17.02 inches. Overall, it was a successful performance of the MRMS precipitation product suite for this historic event.

Following the successful update of MRMS with the build v12.0, the MRMS v12.1.0 update was implemented on 1420 UTC 24 February 2021 at the National Weather Service. This update contains a series of updates that provide technical improvements to the MRMS system, changes to what is distributed on the NWS Satellite Broadcast Network (SBN), the addition of the Alamosa, CO gap-filling radar, and changes to the Multi-Sensor QPE product latency.

The anticipated update of the MRMS system to version 12.0 became operational at the National Weather Service at 1330 UTC on 14 October 2020. The MRMS v12.0 build is the largest update to the MRMS hydrometeorological product suite since the initial operating capabilities in September 2014. This build includes a series of scientific advancements ranging from a new dual-polarization synthetic radar QPE to a multi-sensor QPE that gap-fills areas of poor radar coverage.

The onboarding process for the MRMS version 12.0 update at NCEP Central Operations began in April and is targeting an operational transition by the end of the fiscal year (September 2020). While the onboarding and testing continues, a list of updates for the v12.0 build can be found on the Code Updates page.

The v12.0 build of the MRMS system is the biggest update for the precipitation product suite since the initial operating capabilities back in September 2014. Highlights of the MRMS v12.0 product updates include the following:

The MRMS team looks forward to having the new products made available and to continuing their research and development efforts to improve the science of precipitation estimation. 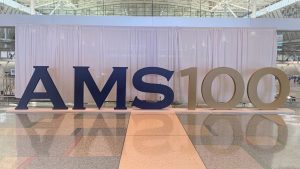 Multiple presentations and posters regarding the work being done for the Multi-Radar Multi-Sensor system were presented by OU/CIMMS and NSSL staff at the 100th AMS annual meeting. Topics ranged from a new bright band delineation technique to improving orographic precipitation estimations to the future plans of MRMS. You can view all of the topics presented by going to the 2020 conference presentations page.

Only two years after the historic rainfall from Hurricane Harvey, the nearly stationary movement from the remnants of Tropical Storm Imelda produced another catastrophic flood event over southeast Texas. Convective features being fed by an unstable atmospheric environment and the warm waters of the Gulf of Mexico produced rain rates of 4-6 inches per hour. Localized rainfall accumulations of over three feet were recorded. Most of this rainfall fell within a 24-hour period.

The experimental version of MRMS, designated as MRMS v12.0, produced a considerably accurate depiction of the rainfall over southeast Texas (Table 1). Analysis shown below is focused on the 24-hour period ending 1200 UTC 19 September 2019. The MRMS QPEs were compared against independent CoCoRaHS observations. The operational version of the MRMS radar-only QPE that is based only on reflectivity had some general overestimation bias for the period of greatest rainfall. The MRMS v12.0 dual-pol synthetic radar QPE with evaporation correction produced greater totals between Beaumont and Winnie, TX, but had overall better statistical values with some overestimation bias. The maximum 24-h value shown with the experimental dual-pol synthetic QPE product was 36.62 inches.

The experimental MRMS dual-pol synthetic radar QPE with evaporation correction is fed into the next update for the Flooded Locations and Simulated Hydrographs (FLASH) system, which is available at http://flash.ou.edu/. The extreme rainfall rates and accumulations created off-the-chart values for the CREST maximum unit streamflow values (Figure 1); yet, the over 1000 water rescues, countless road closures, and numerous evacuations justify the extreme hydrologic values.

The MRMS v12.0 Multi-Sensor QPE, which gauge-corrects the radar data while gap-filling radar coverage, had a near-perfect bias at 1.018 with lower statistical errors. The maximum 24-h value over the period ending 1200 UTC 19 September 2019 was 34.10 inches. The overall 72-h total from the period ending 1200 UTC 20 September 2019 using the MRMS v12.0 Multi-Sensor QPE is shown in Figure 2. There is a significant area of 18+ inches of rainfall stretching from near The Woodlands to the Texas/Louisiana border. Over three feet of rain fell from west of Winnie, TX to Beaumont, TX. The maximum three-day total from the experimental MRMS Multi-Sensor QPE was 45.70 inches.

Hurricane Dorian will go into the record books as one of the most powerful tropical cyclones in the history of the north Atlantic basin. The very slow forward motion over the Bahamas has produced catastrophic damage from the sustained Category 5 winds and 20+ foot storm surge, yet the slow storm motion has produced another significant hazard over the region… prolonged rainfall. This is similar to what has been observed with Harvey (2017) and Florence (2018). The forward motion of Dorian has been 10 knots or less for the past five days, including a period of being stationary over Grand Bahama.

So how much rain could have fallen with this system in that region?

Given the lack of gauge observations and radar data over the Bahamas, it is hard to determine from the current NEXRAD radar fleet. The top image shown here depicts the rainfall from our WSR-88D radars using the experimental MRMS dual-pol synthetic QPE with evaporation correction. Dorian passing near the east coast of Florida allowed for better sampling, resulting in the product estimating over 12 inches of rain offshore and 4-6 inches of rain inland with the outer bands. But you get very poor representations of radar near the center of the storm track and areas eastwards; moreover, you cannot properly depict the potential rainfall over the Bahamas at this far range.

The experimental Multi-Sensor QPE in MRMS utilizes other near real-time sources to compensate for this. In this case with Dorian, the 1-h forecast QPF from the HRRR is the input that supplements the radar QPE. The estimated totals are astonishing, with 20-40 inches of rain over the islands with approximately 50 inches of rain over open water. Researchers will continue to evaluate these products and investigate how to keep improving the experimental product suite. Other efforts are ongoing to investigate additional observational sources in the real-time MRMS system to feed into such products as the Multi-Sensor QPE. 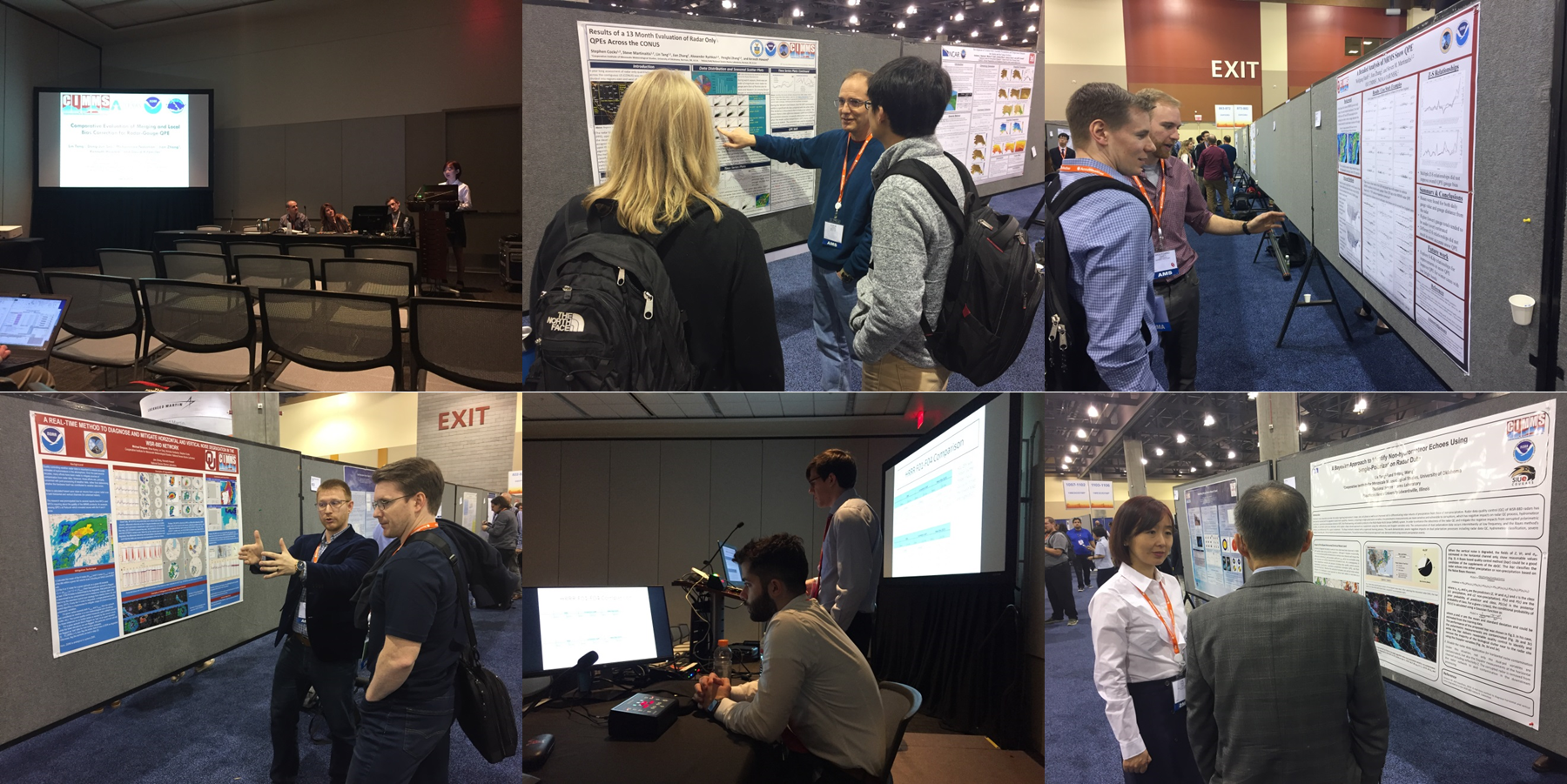 CIMMS research scientists from the MRMS QPE group shared their hard work and research findings with the weather community at the 2019 AMS Annual Meeting in Phoenix, AZ from 7-10 January 2019. For more information on the various topics presented, please visit our 2019 conference presentations page to see all of the MRMS QPE-related abstracts.

One of the bigger challenges with estimating precipitation is when hail is present. The presence of hail gives a different signal in many radar products, which impacts the ability to use radar to accurately provide a liquid accumulation value. In the operational version of MRMS, a hail cap is used in identified hail cores (i.e., where the Maximum Expected Size of Hail, or MESH, product is non-zero) by capping the precipitation rate a 2.12 inches per hour. While the hail cap was designed to prevent some overestimations of QPE, it has also created some significant underestimations as well.

In the upcoming build of MRMS, two changes will be made to mitigate the issues of hail contamination. The first is in the creation of the new MRMS dual-pol synthetic QPE. Instead of using reflectivity to estimate precipitation, hail cores will utilize specific differential phase (KDP) to better estimate rainfall in these convective storms. The image below shows how the hourly rainfall estimation is improved using this technique. The second is to reduce the impacts of the hail cap for MESH with the reflectivity-based approach by linearly increasing the influence of the hail cap from MESH = 0.01 inch per hour to MESH = 1.00 inch per hour. This would be applied in areas where radar coverage is degraded or if there are technical issues impacting the dual-polarization products from a radar.

There are two big rainfall impacts from tropical cyclones that will occur over the next few days in the continental United States. The first and greatest impact will be from Hurricane Florence with the forecast of 20+ inches of rain in the Carolinas. There is a also a tropical disturbance moving towards southern Texas with the forecast of 7+ inches of rain on top of already saturated soils.

The MRMS group at NSSL has developed a web page displaying the storm total accumulations for select experimental MRMS v12.0 precipitation products. The rainfall accumulations provided on the web site starts at 0000 UTC 13 September 2018 (8:00PM EDT 12 September). These products will continue to accumulate on this page until further notice. 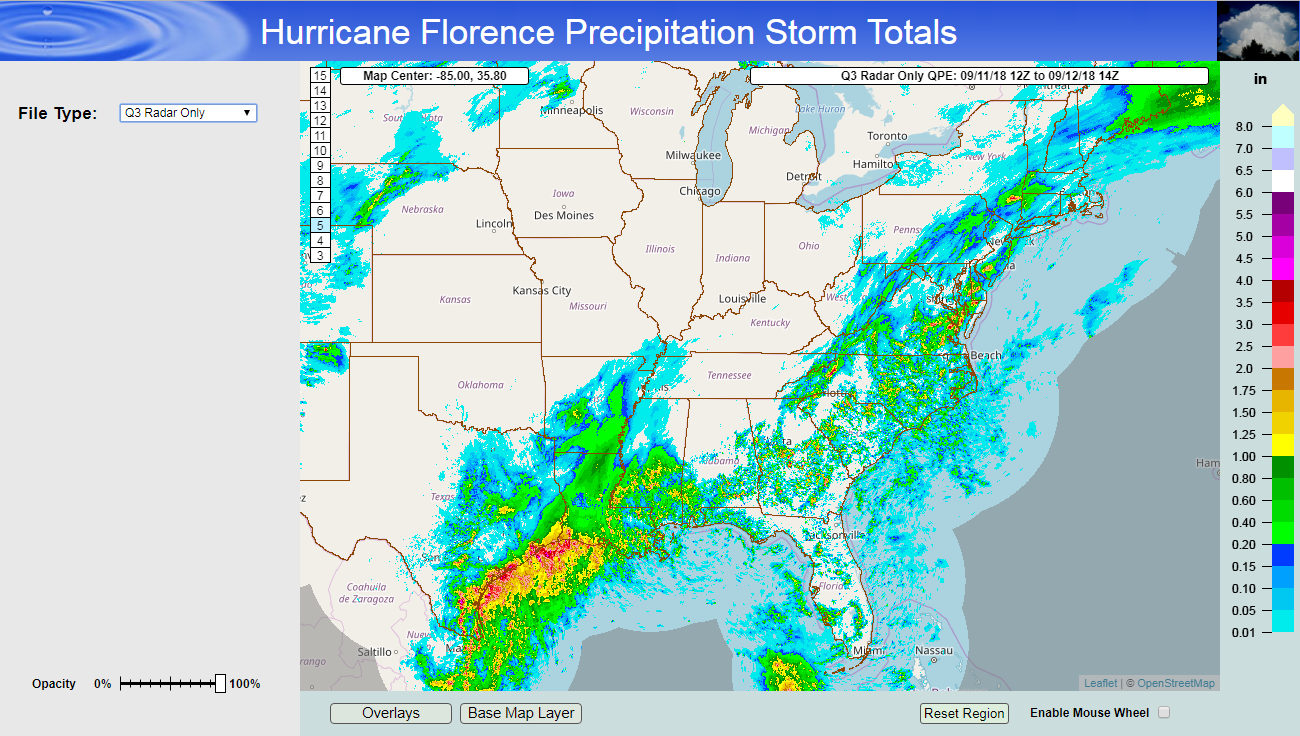