The KPHI research team held this year’s virtual Threats-in-Motion (TIM) Workshop from Sept 20-24.  We were honored to have a total of 25 broadcast participants (5 per day) for the week.  Threats-in-Motion is a proposed update to the current warning paradigm which features a more rapidly updating warning polygon with moves along with a storm, possibly at intervals as quickly as 1 minute.

Participants worked through surveys in which they were shown different TIM prototypes, and were then asked for feedback.  Focus group discussion followed the surveys.  Discussion topics included initial impressions, preferred update frequency, and possible concerns.   Most of our participants voiced a desire for a product like TIM, but expressed some concern over update frequency.  While most of the broadcasters felt they could keep up with 1-minute updates in their on-air coverage, they might struggle to keep other platforms, such as crawls and social media, up to speed.

Feedback and discussions were insightful and revealing.  Virtual experiments may not feature our signature delicious brownies, but we appreciate the time and effort from each of our participants!

KPHI TV Station Management is sending out a nationwide call for broadcast applicants to participate in the 2021 Threats-in-Motion Virtual Tabletop Exercise as part of NOAA’s Hazardous Weather Testbed. We need 25 broadcasters to participate in a one-day virtual tabletop exercise the week of September 20-24, 2021.

Threats-in-Motion is a proposed warning paradigm in which warnings update more rapidly and move with the storm.

Are you currently on-air as a broadcast meteorologist? If so, we need your help. Each year we bring 6 broadcasters into NOAA’s Hazardous Weather Testbed and have them try out experimental severe weather warning products in a mock television studio (named KPHI-TV by our first participant). Due to the ongoing COVID-19 pandemic, we had to cancel our 2020 experiment. To collect related data from a much larger sample of broadcasters, we created a 15- to 20-min survey that covers baseline data on current NWS products, preferences on experimental products, and, for those that are bilingual, preferred translations for current and experimental products. What is our goal? To incorporate broadcasters into the research process so that if/when something from research is transitioned into NWS operations, it works for on-air presentation.

If you have some time to give to our research effort, our survey can be found at https://ousurvey.qualtrics.com/jfe/form/SV_bfiLjdr8UnN9ag5

Thank you so much for you time!

Due to the cancelation of the 2020 KPHI experiment in NOAA’s Hazardous Weather Testbed, we are distributing a 15-20 min survey to continue collecting broadcast meteorologist input on a proposed modernization of the NWS forecast & warning paradigm. Become a part of the research process and participate in our survey here

We are disappointed to announce that after much deliberation, we must cancel the 2020 KPHI experiment in NOAA’s Hazardous Weather Testbed. We consulted past participants to see if they could envision a virtual experiment and consensus was no. To try to reach a broader audience on some of our research questions, we will be distributing a survey for broadcast meteorologists within the next few months. We encourage anyone that takes the survey to do so while eating brownies.

KPHI TV is excited to announce that Sean Ernst, hater of Mondays, successfully defended his MS thesis! Congratulations Sean! Part of Sean’s research focused on a Monday activity of the KPHI experiment where participants discussed how the risk level of Storm Prediction Center Convective Outlooks impacts their daily routines. You can view a recording of Sean’s spring seminar here: Colorful Language: Interpretation of the Convective Outlook 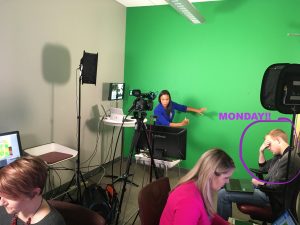 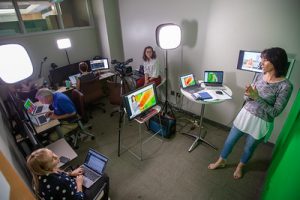 KPHI TV Station Management is sending out a nationwide call for broadcast applicants to participate in the 2020 Probabilistic Hazard Information project in NOAA’s Hazardous Weather Testbed. We need 2 broadcasters each week of our 3-week project. The application closes April 10, 2020.

KPHI TV Station Management has selected the dates for the 2020 experiment in NOAA’s Hazardous Weather Testbed! Mark your calendars! Our 3 weeks of warning operations will be: June 15-19, June 22-26, and July 6-10.

KPHI TV research scientist, Kodi Berry, and KPHI TV participant, Denise Isaac, were guests on the 12/23/2019 episode of WeatherBrains. Check out the video below to learn more about Denise’s experience, the types of experimental products tested in the project, and great discussion! 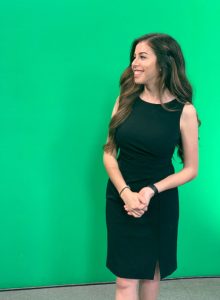 Emma Landeros is an undergraduate at the University of Oklahoma (OU). She is pursuing a Bachelor of Science in Meteorology with a minor in Broadcast Meteorology. Emma is involved with OU Nightly, OU’s student-run TV broadcast, where she records a Spanish weather briefing every week. She is also involved with The Oklahoma Weather Lab, where she is a co-deputy director of Broadcast Media. After graduation, Emma hopes to pursue a career as a bilingual broadcast meteorologist. Emma is excited to be a part of KPHI-TV and is looking forward to learning anything and everything she can, focusing on how broadcast meteorologists communicate severe weather to the public.