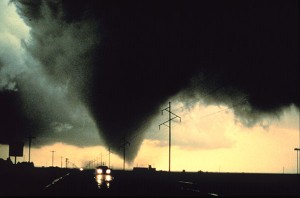 NSSL is gearing up for the largest-ever field program to study how tornadoes form and dissipate: VORTEX-2 (Verification of the Origins of Rotation in Tornadoes Experiment – 2). VORTEX-2 is set to run from May 10 – June 15 of 2009 and 2010. V2 is a NOAA/National Science Foundation (NSF) funded program bringing collaborators from around the United States. Key players are NOAA’s NSSL, the University of Oklahoma (OU), OU’s Cooperative Institute for Mesoscale Meteorological Studies, the Center for Severe Weather Research, Penn State, and Texas Tech Univeristy.

The legacy VORTEX 1 program collected unprecedented datasets on tornadoes in the central Great Plains during 1994 and 1995. Scientists hope to build on the succes of VORTEX1 through V2, ultimately leading to even further improvements in tornado warning skill, and short-term forecasts of severe weather. and is a follow-on to the VORTEX project of the mid 1990’s designed to study how tornadoes form.

VORTEX-2 is a carefully planned field experiment that will target a potentially tornadic storm and canvass the area with an armada of instruments including radars, mobile vehicles equipped with instruments, instrumented weather balloons, and research aircraft.

The project will focus on answering new questions about how, when, and why tornadoes form, why some thunderstorms produce tornadoes and others do not, the structure of tornadoes, and the relationship of tornadic winds to damage. Answers to these questions will help improve forecasts and warnings of tornadoes.

NSSL is providing leadership and equipment for VORTEX-2. During Spring 2008, organizers will be outfitting vehicles, testing equipment and upgrading communications. A test run on V2 technologies is planned from 15 May-15 June to identify and solve any problems.

“VORTEX1 made a significant difference,” says NSSL researcher Lou Wicker, “But now we have a lot more technology to make real-time predictions, which can increase warning times.”

Background: For over 30 years, researchers at NSSL and their colleagues have been working to unravel the mysteries of tornado formation. VORTEX-2 will provide valuable data to help complete the picture begun with the original VORTEX project in 1994 and 1995. VORTEX-2 is receiving significant funding from the NSF and NOAA.

Significance: Understanding how and why tornadoes form will lead to improved forecasts and warnings of severe thunderstorms and tornadoes saving lives and property.