On the evening of May 23rd into the early morning of May 24th, 2015 the Blanco River in Texas experienced a significant flooding event resulting in the closure of I-35 north & southbound near the city of San Marcos, TX. There were also multiple high-water rescues in the area including helicopter rescues of victims trapped in houses. The Hays County jail in Texas was also evacuated due to threatening flood waters. The FLASH development system was running for this event producing products forecasting & monitoring the flooding in near real time.

The MRMS-FLASH system, running in a real-time demonstration mode for several years now, performed admirably for the recent flash flooding events in Oklahoma and Texas. The MRMS-FLASH system runs in a completely automated fashion ingesting quantitative precipitation estimates every 5-minutes from the MRMS mosaic of NEXRAD data. The FLASH hydrologic modeling system subsequently produces 6-hour forecast hydrographs for everywhere across the CONUS.

On evening of May 25th, 2015 the city of Houston, Texas experienced a serious flash flooding event. MRMS precipitation estimates indicate that the western portions of the city experienced 6-8″ of rainfall.

The ratio of precipitation to flash flood guidance shows exceedance values of 100-140% over this area, however some of the USGS stream gauges reporting flash flooding (blue triangles) and the flash flood local storm reports (brown circles) fall outside of this region. This product is important because it is equivalent to the main tool operational NWS forecasters have available for flash flood monitoring and prediction.

One of the most intractable problems facing those who issue flash flood warnings and watches is verification. The term “flash flooding” means different things to different people, so observing these events is distinct from, say, observing a tornado. Most people immediately know what a tornado is but do you immediately know what a flash flood is? It’s okay if you answered “no”! We recognize that different strategies exist for locating and classifying flash floods. In an effort to be as comprehensive as possible, the HWT-Hydro experiment is including observations from several distinct sources.

Automated systems can provide useful information in these situations. USGS stream gauges automatically measure stream height (or “stage”) at over 16,000 sites across the United States every 15 minutes. At these sites, cross sectional information about the river channel is known and so these stage measurements can be converted into stream flow estimates. Additionally, the USGS and its partner agencies know enough about these locations to estimate the relative rarity (or “return period) of a particular flow, and at some locations, the National Weather Service has assigned flood stages corresponding to specific impacts at specific stream height levels. On flash.ou.edu, blue triangles mark stream gauge locations where the NWS “Action Stage” stage height has been exceeded by the gauge, the stream height has risen by a significant level in a short period of time, or the USGS estimated 2-year return period flow has been surpassed. These USGS observations are being fed to the FLASH system and the HWT-Hydro experiment by our partners at the NCEP Weather Prediction Center’s FFaIR experiment. The downside of USGS observations should already be clear: what happens if there’s a flood in an ungauged location? The answer to this question means we must seek out additional sources of information.

The NWS operates 122 Weather Forecast Offices across the country, each of which is responsible for a set of counties, parishes, or boroughs. These offices issue flash flood watches and warnings as necessary. They also collect reports of flash flooding and other phenomena (called Local Storm Reports, or LSRs) because as forecasters, they have a vested interest in determining if a given watch or warning was successfully verified by on-the-ground conditions. So if they don’t receive reports volunteered by the public, broadcasters, social media, or local government officials, they will call known sources inside a watch or warning until they determine if flooding actually occurred. The NWS is responsible for the whole US so the LSRs should be nearly comprehensive but there are caveats to this: many areas with low or no population density will lack appropriate LSRs and in areas where no warning is issued there still could have been flash flooding. Outside of these warning polygons, if no one bothers to report impacts to their local NWS office no LSR will be issued. On the flash.ou.edu website, LSRs are represented by reddish-brown circles. They can be moused over to see the date and time at which the report was issued (in UTC) as well as the text describing the nature of the flash flooding impact.

Some folks may experience flash flooding but can’t, don’t know how, or don’t want to report this via phone to local officials or to their local NWS office. However, as smartphones proliferate, useful weather information can be garnered via crowd sourcing. One of the leading projects in this field was developed at the National Severe Storms Laboratory and the University of Oklahoma — mPING. mPING allows geolocated smartphone owners to report the type of precipitation or severe weather impact (including flash flooding) occurring at their location. This data is used by scientists at OU and NSSL, as well as NWS forecasters and others. All reports can be accessed via the mPING website and flash flooding reports in particular can be accessed via the FLASH website, where they appear as purple equilateral triangles. A report of flash flooding can fall into one of four possible impact classes in the mPING app, ranging from nuisance and minor flooding all the way up to deadly or damaging flooding. Remember, safety comes first when using mPING. Never drive into flooded roadways or walk into floodwaters! The free mPING app is available for iOS devices and Android devices from the Apple App Store or the Google Play Store, respectively.

One final source of observations is unique to the HWT-Hydro project. As part of the support provided to the program by the US Weather Research Program, we have hired two callers to work as part of NSSL’s 2014 SHAVE project. As our forecast participants and other guests issue experimental watches and warnings each afternoon and evening, SHAVE callers will use a national database of landline telephone numbers mapped to addresses to call people residing within and near these experimental products and give them telephone surveys about flash flooding impacts in and near their areas. These reports thus provide an extremely dense storm focused set of observations. On flash.ou.edu, SHAVE reports will appear as small squares. Those surveys where the respondent reported no flash flooding will appear in gray. Respondents reporting flash flooding will appear in blue.

Early each afternoon, HWT-Hydro participants will look back at the products they issued the afternoon before. They will evaluate the skill and usefulness of forecast tools and the utility of the various types of observations described above. Yesterday our forecasters split into two areas: one pair focused on Tennessee, Arkansas, and the surrounding area, while the other pair worked in the Desert Southwest with the ongoing monsoon.

The inaugural Hazardous Weather Testbed Hydrology (HWT-Hydro) experiment began today at the National Weather Center in Norman OK. This experiment will explore uses of the FLASH suite of flash flood and heavy rainfall products. Participants will be asked to use these products to issue experimental flash flood watches and warnings; these will include information about the likelihood or uncertainty of a given impact as well as the severity of expected impacts. Novel sources of flash flood observations, including the mPING mobile application and SHAVE phone calls, will be used to assess the effectiveness of the experimental tools and the experimental watches and warnings.

Each day of the experiment will begin with a weather briefing from the Flash Flood and Intense Rainfall Experiment at the NCEP Weather Prediction Center in College Park MD. Then forecasters will spend time evaluating the performance of the experimental forecast tools and observations from the previous day’s shift. Forecasters will then issue flash flood watches and warnings as necessary, typically from 3 PM to 8 PM CDT, Monday through Thursday. This “virtual forecast office” will cover the entire Lower 48.

Today’s areas of focus can be broadly divided into three main components: the summer monsoon in the Desert Southwest, a complex of strong to severe convection in the middle Mississippi River and Ohio River valleys, and rain across the Middle Atlantic into the Northeast. As I type, our forecasters have already issued an experimental watch and two experimental warnings for afternoon storms in the Southwest (see below for these experimental products overlaid on state/national boundaries and 6-hr MRMS rainfall estimates). More frequent updates can be found by following the experiment on Twitter at @HWTHydro. 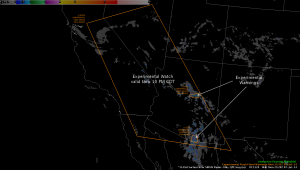