TIM is a warning generation approach that would enable the NWS to advance severe thunderstorm and tornado warnings from the current static polygon system to continuously updating polygons that move forward with a storm.  This concept is proposed as a first stage for implementation of the Forecasting a Continuum of Environmental Threats (FACETs) paradigm for severe weather warnings.  A simple change in the way warnings are generated can achieve major improvements.

Forecasting A Continuum of Environmental Threats (FACETs) is a next-generation forecast and warning framework that is modern, flexible, and designed to communicate clear and simple hazardous weather information to serve the public, extending from days to within minutes of an event for all environmental threats.  FACETs-Severe is focused on severe convective weather, such as tornadoes, thunderstorm winds, hail, and lightning.

Probabilistic Hazard Information (PHI) are continuously-updating probabilistic hazard grids (Fig. 1).  PHI can be used to provide custom user-specific products that can be tailored to adapt to a variety of needs – for example, providing longer lead times, at lower confidence, for more vulnerable populations with a lower tolerance for risk.

TIM are NWS Severe Thunderstorm Warnings and Tornado Warnings represented by continuously-updating warning polygons.  TIM polygons update every minute, and march forward with the storm threat.  TIM is essentially PHI, but without the probabilities (which will come later as the science evolves).

Because weather is continuously updating!  Data used for severe weather forecast and warning decision making is updating continuously, ranging from radar, satellite, lightning, near-storm environment, as well as guidance algorithm data such as Multiple-Radar/Multiple-Sensor (MRMS) and ProbSevere – each which update at 1- to 2-minute intervals.

What are the disadvantages of the current warning system?

Currently, when NWS forecasters issue warnings for long-lasting severe thunderstorms, the storms are handled by a series of separate warning polygons that are issued one after the other, often with little overlap, as a storm moves along a path (Fig. 2).  This frequently results in non-uniform lead times for those who are on the border of a severe thunderstorm or tornado warning.  Nearly adjacent locations can have dramatically different lead times if one location is just outside the upstream warning.  With each subsequent warning in the series, this behavior continues.  This is particularly noticeable for long-track tornado events (Fig. 3).  In some cases, the workload of the forecaster is too great to keep up with the issuance of new downstream warnings, and sometimes a storm can move out of a current polygon and become unwarned.​

What are the advantages of TIM?

With TIM, a warning polygon is attached to the threat and moves forward along with it (Fig. 4, Fig. 5).  This provides equitable lead time for all locations downstream of the event (Fig. 6).  When forecaster workload is high, storms remain continually tracked and warned.  In addition, TIM can also support the capability to provide automated “all clear” information when the threat has passed [1].  TIM is more temporally-specific, and provides meaningful information about times of arrival and departure [2].  This all results in greater average lead times and lower average departure times than our current warnings, with little to no impact to average false alarm time (Fig. 7).​ 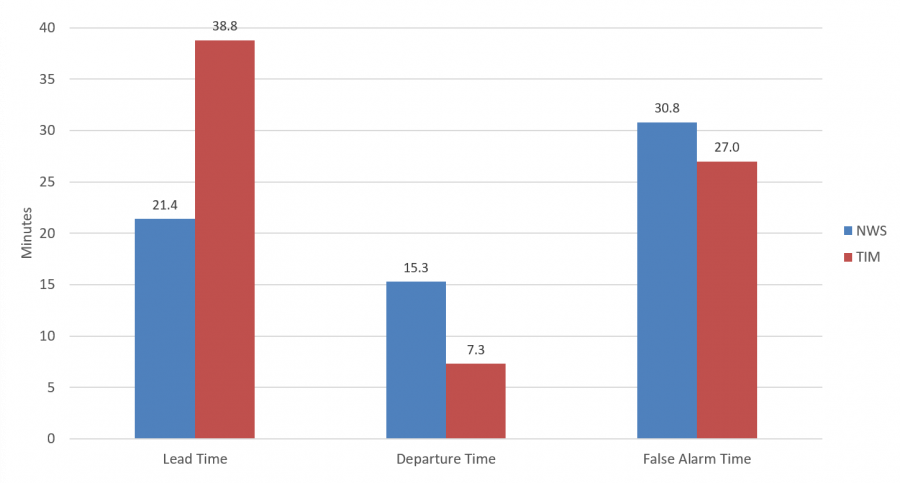 Why not just increase the duration of our current warnings?

Because this will greatly increase average false alarm area and false alarm time at the expense of the greater lead time.  Also, locations within the warning will still have inequitable lead times.

The Storm Prediction Center is already developing Watches-In-Motion and outlooks in motion for severe convective threats.  TIM is intended to span the entire time and space scales of severe weather.

How will TIM work with the warning forecaster?

TIM is already designed for AWIPS2 Hazard Services, which has already been tested during Fall 2019 and Winter 2020 at the​​​​​ NOAA Hazardous Weather Testbed.  Forecasters define 2D storm objects and determine their motion vectors, and the polygon swaths are derived from that information.  2D object-based storm analysis improves location and motion estimates versus the point or line tracking in WarnGen.  If the storm is expected to live beyond the typical warning duration, the forecaster turns on the Persist option.  As with today’s warning best practices for intermediate warning updates (known as Severe Weather Statements), the forecaster intervenes with the object every 15 minutes or so to modify the object shape, location, duration, motion information, and warning details.  If the shape or motion of a storm changes, TIM allows for adjustments to the polygon without having to wait for warning to end, or issuing another potentially-confusing warning.  The same storm could be depicted using the same ID throughout, along with a continuous history of the storm’s evolution.  When the forecaster feels the storm is nearing the end of its life-cycle, they will turn the Persist option off and let the warning naturally expire.

What about short-lived storms?

For short-lived storms, like pulse-severe storms, the best practice is to not persist the warnings.  But even for non-persisting warnings, the trailing end of a TIM warning is always updating and automatically clearing out places where the hazard has already passed.

How would a rapidly-updating warning product work with the various warning dissemination technologies available, such as county-based systems (e.g., NOAA Weather Radio), and location-based systems (WEA mobile alerts)?  We have some ideas, but need to work with experts in dissemination in both the public and private sector before we can determine if there is viability in moving forward with the TIM paradigm.

Threats-in-motion offers improvements to the current warning paradigm, especially for storms expected to live longer than your average warning duration such as the long-tracked supercells we see on violent tornado outbreaks, when it matters most.

[1] A significant element missing in messaging appears to be the “all clear” indicator. The public perceives there is minimal information provided regarding when the danger has passed. They may come out of their shelters too soon or they may stay too long in their shelters and become agitated because they do not know when they will be safe.

[2] This research has indicated that location and timing are probably two of the most critical elements in the messaging process.  Location is critical because people do not want to change their behavior unless required. Timing is also a critical issue for the public because they want to know when they should prepare to take action.

FACETs is a proposed next-generation forecast and warning framework that is modern, flexible, and designed to communicate clear and simple hazardous weather information to serve the public. FACETs supports NOAA’s Weather-Ready Nation initiative to build community resilience in the face of increasing vulnerability to extreme weather and water events.  More information about FACETs can be found at:

This blog will be used by NSSL scientists working on FACETs related research and projects for severe weather to provide updates and news related to this exciting effort to help improve the nation’s hazardous weather forecast and warning system.