Significance: The circumstances in which people perished in flash floods suggest that situational, rather than generic, examination of vulnerability is required to realistically capture risky cases during short fuse flood events.

Important Conclusions:
In the 21st century, the prediction of and subsequent response to impacts due to sudden onset and localized flash flooding events remain a challenge for forecasters and emergency managers. Structural measures and/or advances in hydrologic forecasting systems alone do not guarantee reduction of fatalities during short-fuse events. Additional factors related to social and behavioral processes need to be integrated to capture vulnerability of people during flash floods. Identifying the social, spatial, and temporal framework of historic losses of life during flash floods is key to gaining a deeper understanding of contextual risk factors and advancing vulnerability assesment to help develop future prevention policies.

This paper investigates 1,075 fatalities from flash flooding recorded from 1996 to 2014 across the United States, providing insight into the circumstances surrounding the fatality events as determined by the victims’ profile and activity and the spatio-temporal context of the flooding. A re-classification of the individual fatality circumstance (i.e., location/activity) is performed to explore statistically the timing, the duration, and location of the flash flood event, as well as the age and gender of the victims. In agreement with other studies, more than 60% of the reported fatalities were related to vehicles, primarily involving males. A geospatial analysis indicated these were most common in southern states. Further, 21% of fatalities occurred outdoors, typically in neighborhoods near streams, where the victims were exhibiting high risk-taking behaviour such as cleaning out drains, and even playing in the floodwaters. Human vulnerability varies dynamically on a sub-daily basis and depends on social and natural factors of the flash flood. For example, most campsite-related fatalities were associated with very fast responding flash flood events (less than five hours duration), occurred more commonly after midnight, and impacted younger females and males alike. On the other hand, fatalities related to inundation of permanent buildings were most commonly associated with longer duration events and impacted the elderly. Situational, rather than generic, examination of vulnerability is required to realistically capture risky cases during short-fuse flood events.

Further work will focus on supplementing the re-classified fatality dataset with other variables describing the storm event, the spatial distribution and socio-demographics of the exposed population, and the exposed built enviornment. This human-based predictive approach will help reform alerting systems, making them more specific and effective in triggering timely preventive actions by the public, leading to a decrease in fatalities caused by flash flooding. 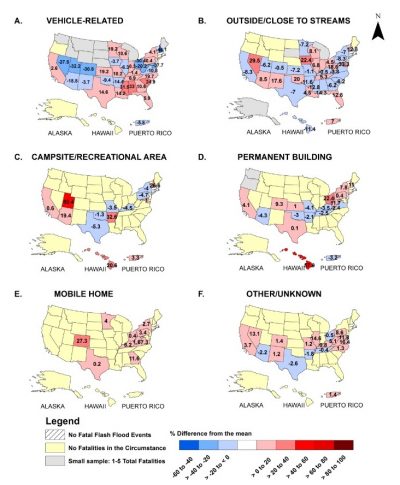