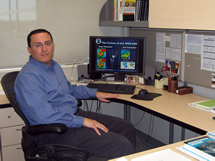 NSSL/CIMMS researcher Dr. Sebastian Torres discussed recent progress on Phased Array Radar technology as an invited keynote speaker at the 2009 International Radar Conference in Bordeaux, France. The theme of the conference was “Surveillance for a safer world” and over 400 engineers were in attendance.