The Day Convection RGB generally shows weak to moderate convection persisting over eastern, ID.  There are occasional new updrafts that develop, but are short-lived.  Combining the satellite trends with radar reflectivity generally depict that the severe threat has become isolated over eastern, ID.

The Day Cloud Convection RGB still shows updrafts persisting over eastern, ID.  However, the anvils of the existing convection are spreading over the area and potentially inhibiting afternoon surface heating.  GLM data has also showed a diminishing trend in activity.   Note, the GLM data did not load for the last few frames.

The latest mesoanalysis shows values around 500 J/kg in portions of eastern, ID.  However, the NUCAPS modified sounding suggests that this could actually be in excess of 1600 J/kg by sampling a point in southern Fremont county.  Therefore, vigorous updrafts are expected to continue as these storms continue to track northeast this afternoon.

At 2120z SFX radar depcited a potentially severe thunderstorm located SW of Pocatello.  At this time, nearly 50 dBZ returns were observed in excess of 35kft.  The -20C level was approximately 17kft.  The MESH readout in ProbSevere showed 1.59″.  However, ProbHail was only 55%.  This appears to be a case where the ProbHail algorithm was reducing the probability based on the environment despite several aspects that support issuing in warning for severe hail.  A warning was issued for this storm at 2101z.

An adjustment in the color scales for the GLM Avg Flash Area  and Minimum Flash Area to something of blue in the “cool” end to bright red in the “hot” end, signifying active and new convection, might help forecasters better interpret the data quicker. 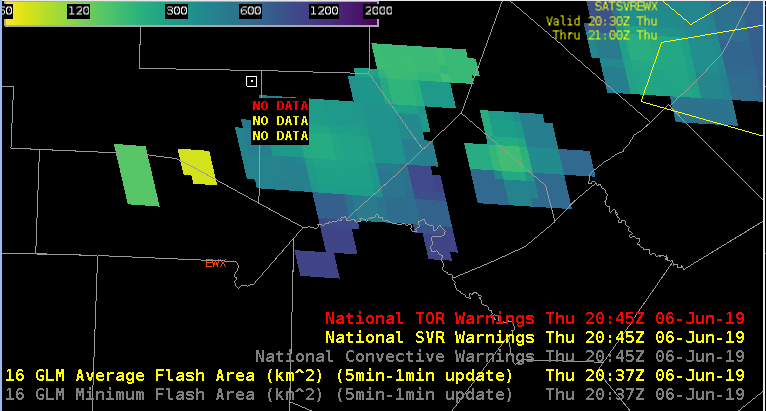 Just prior to 20z the All Sky LAP CAPE shows 1000-1200 J/kg of CAPE across eastern ID.  However, most of this is in a cloudy or GFS layer depiction.  Looking at the GOES 16 derived CAPE, it only shows a narrow region a calculated data in eastern, ID that is about half (500-600 J/kg) of what is shown by the All Sky LAP.

Across the EWX CWA, we’ve had a number of splitting cells. The gif below includes 0.5 reflectivity with MESH & ProbSevere overlaid. As the cell begins to widen north-south, both MESH and the ProbSevere polygon elongate and split.

The day convection RGB depicts stronger updrafts moving from northern UT to southern ID as of about 2030z.  This area is under a severe thunderstorm watch with no warnings in effect at this time. 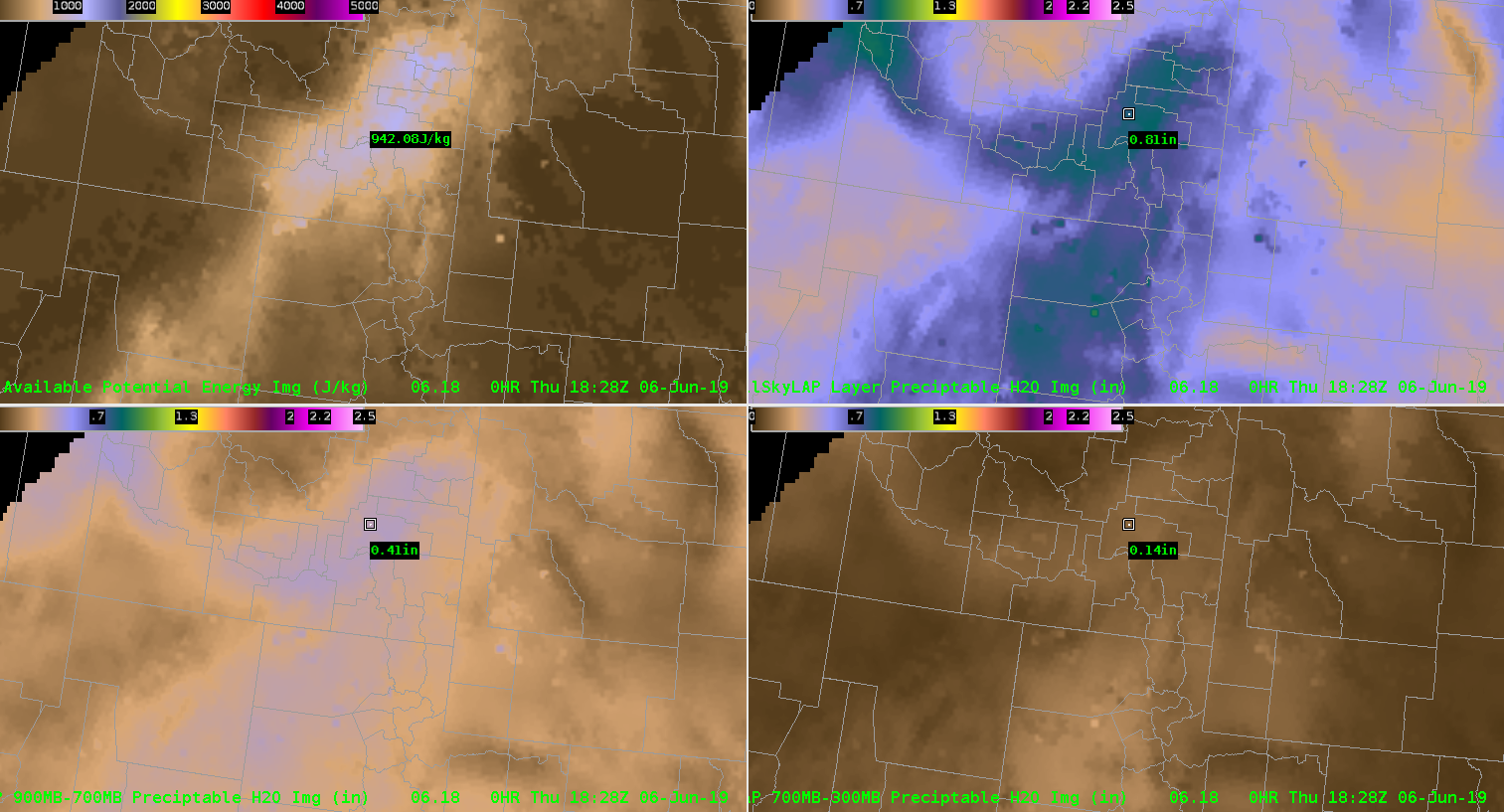 That PWAT value on the morning sounding just west of the area was close to .64″. Seeing how moisture levels are lower to west I can interpolate that the moisture values are similar to what’s show on allsky. The allsky 900-700mb also seems to pick up on the relatively moist area in the lower half of the atmosphere. 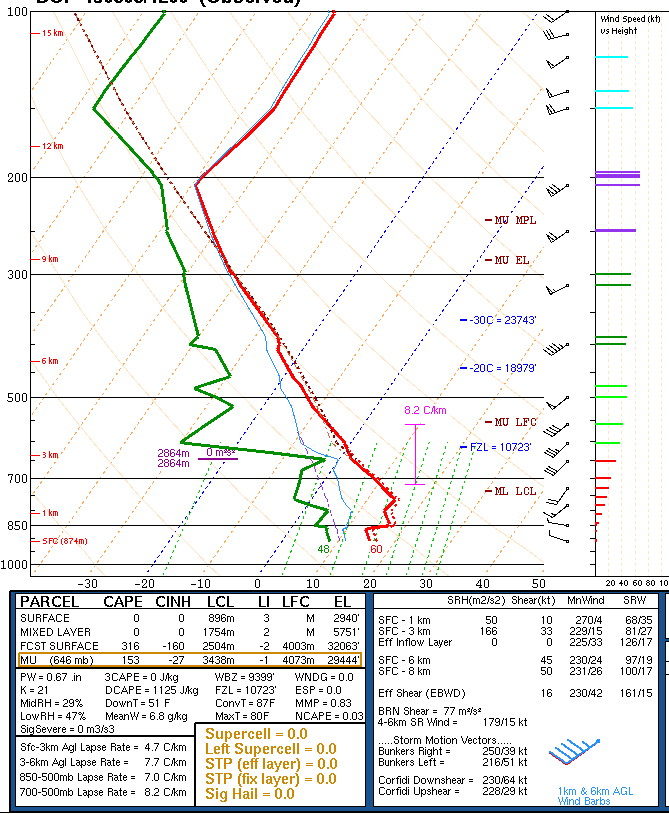 Looking downstream we’re noticing a line of developing convection using the Day land cloud RGB. It’s helpful to analyze just how high the tops of the storms are getting combined with cloud tops.

Zooming in closer I can examine the few storms that have popped up more closely. The RBG help the differentiate between the ambient cirrus clouds from the growing storms. That might not have been as easy to see using a typical visible view.

The AFA and Minimum flash area maximums are hinting at growing convection just downwind.  That growth leads to me to anticipate further intensification as these storms move into a more favorable environment in eastern Idaho.

As storms begin to intensify probsever eis picking up on the strongest activity. Probsevere began to ramp up for the cell just south pf Pocatella. That combined with traditional radar methods lead me to issues a warning for that cell. 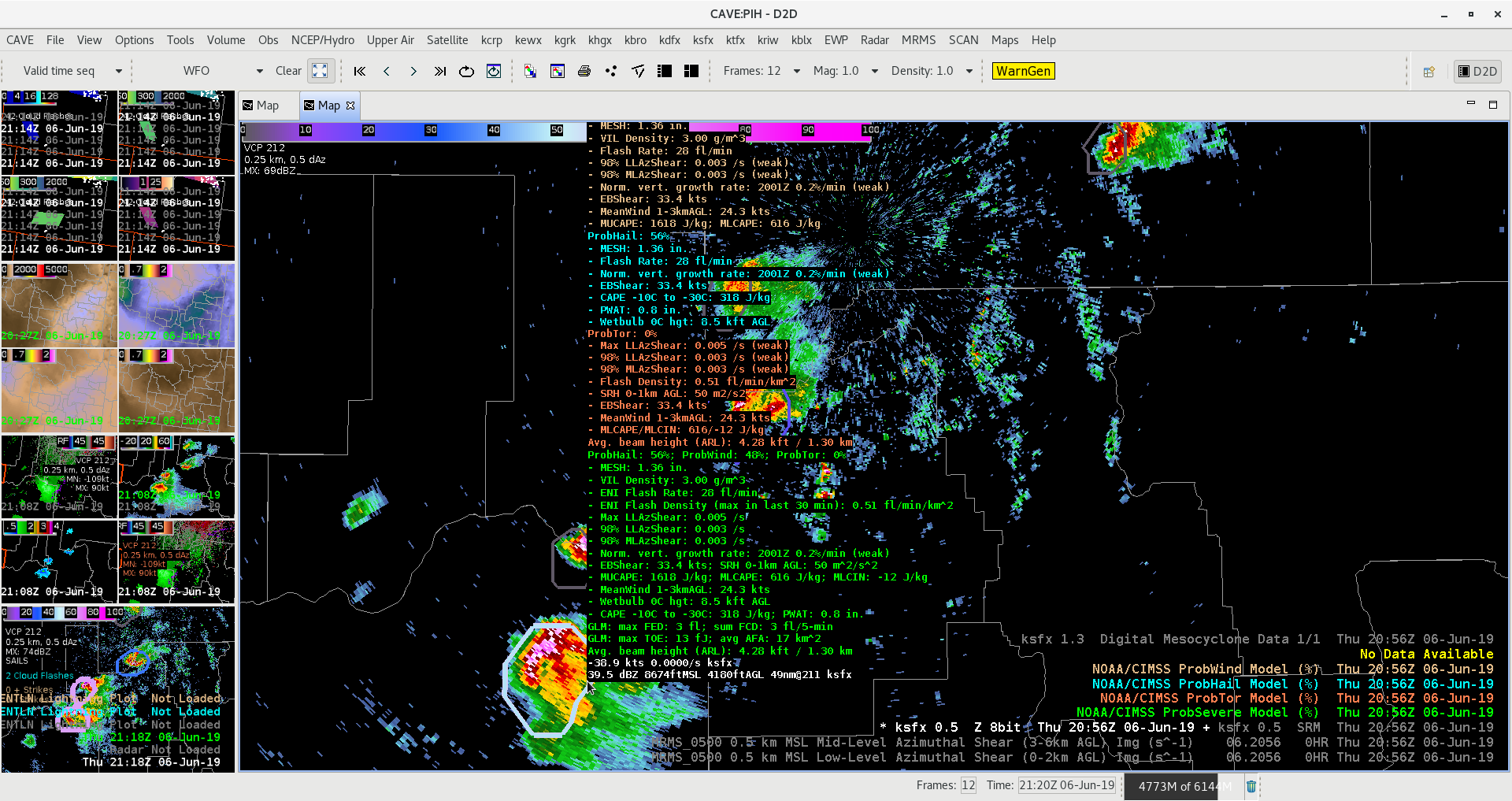 A similar situation unfolded with a south just south of CWA that I debated on warning. The probsevere values did show and uptick. Eventually the storm fell apart as it pushed into southern Idaho. 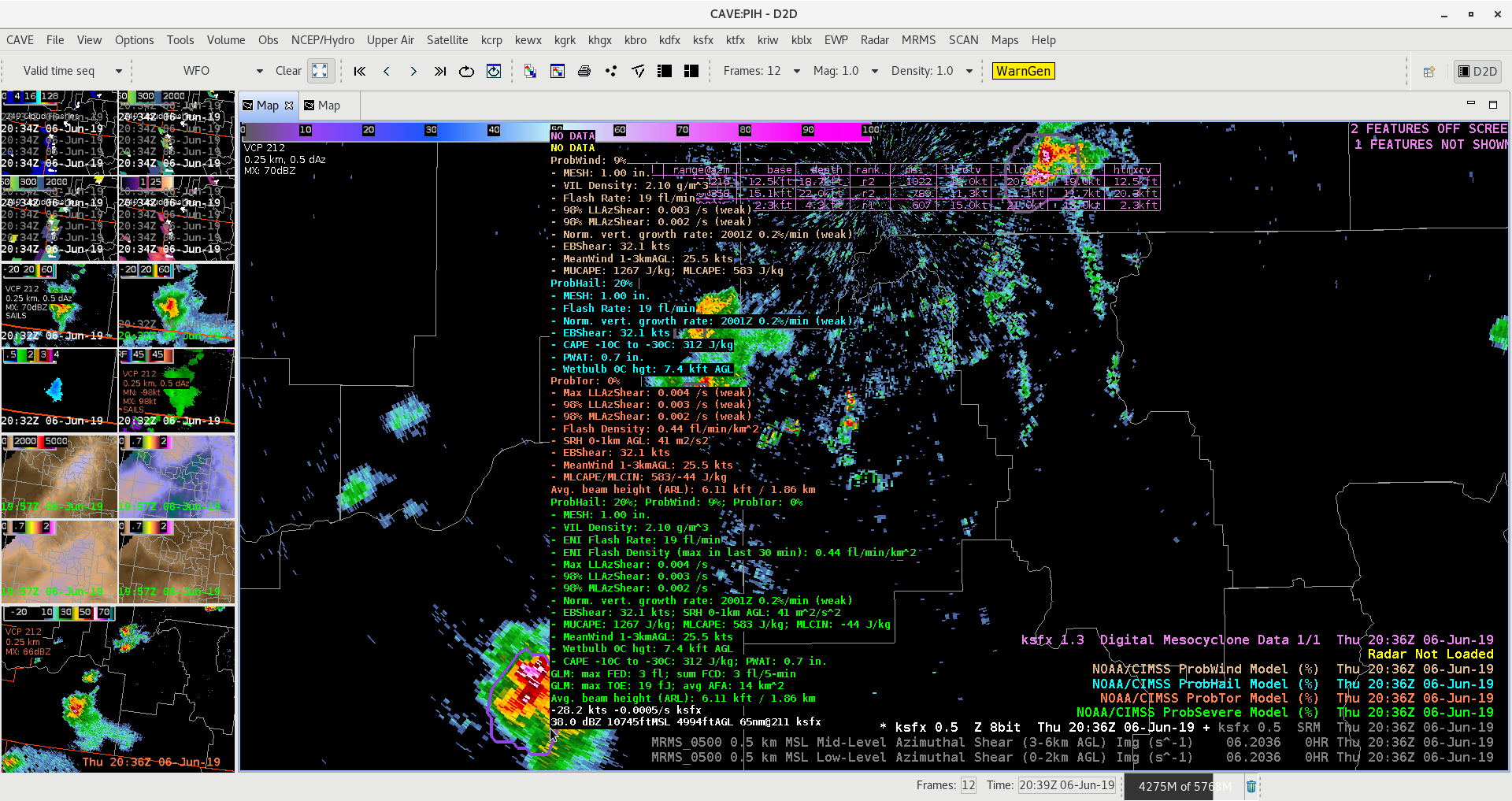 We’re watching a few cells in the southern half of the viewing area.  As NUCAPS comes in I’m comparing it the allsky cape. The allsky cape is around 1100kj. 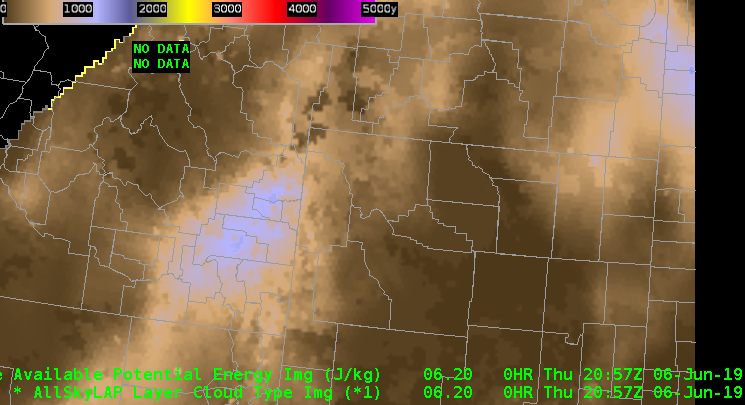 The modified sounding is putting out about 700kj of ml cape. While the nonmodified is much lower down to 500kj. 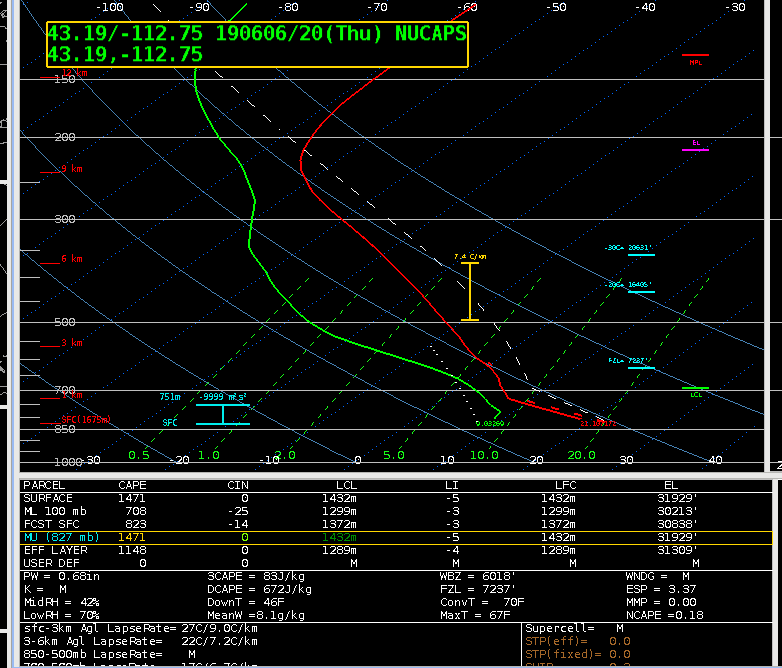 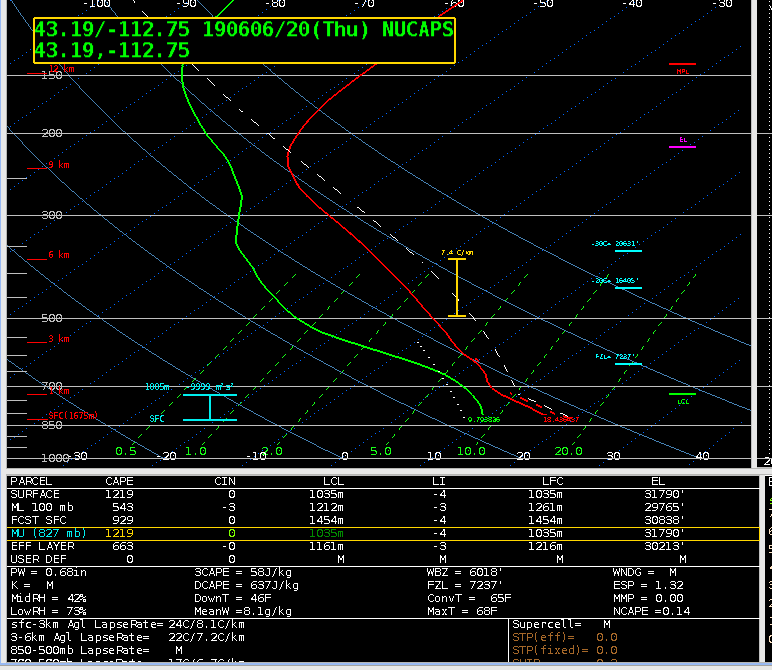 We don’t have a midday sounding to see which one is initializing the best. For what it’s worth. The rap cape output is around 500kj.

The TPW was close to the observed pwats as well. It was outputting about .65″. 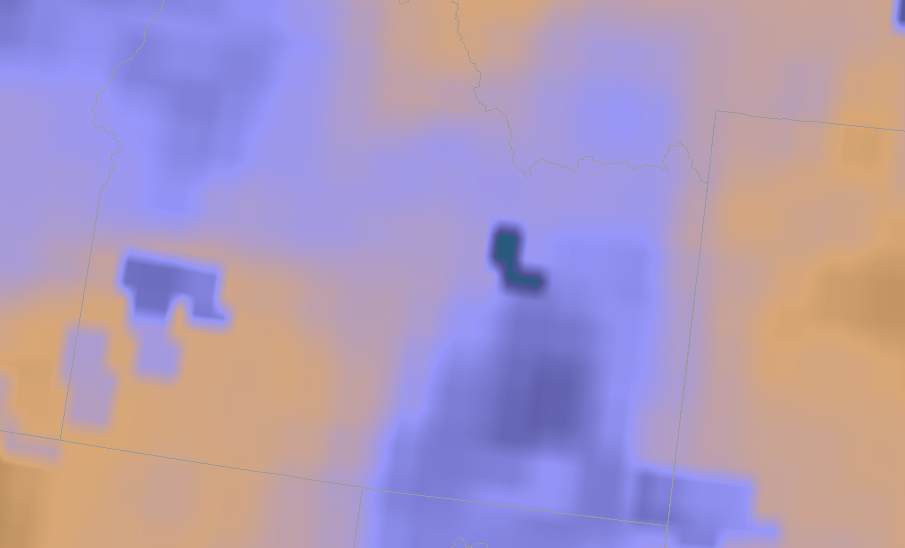 The FED has been fairly low this afternoon which isn’t typical for what I have been usually see. However, the AFA and the MFA are higher indicative of growing updrafts. I’m thinking the FED might be lower because of potential hail in the updraft.

The cell pushing out of Freemont county Idaho continues to intensify as it pushed into Montana. Both the MD, and NMDA were picking up on a high meso that was clearly seen on SRM. 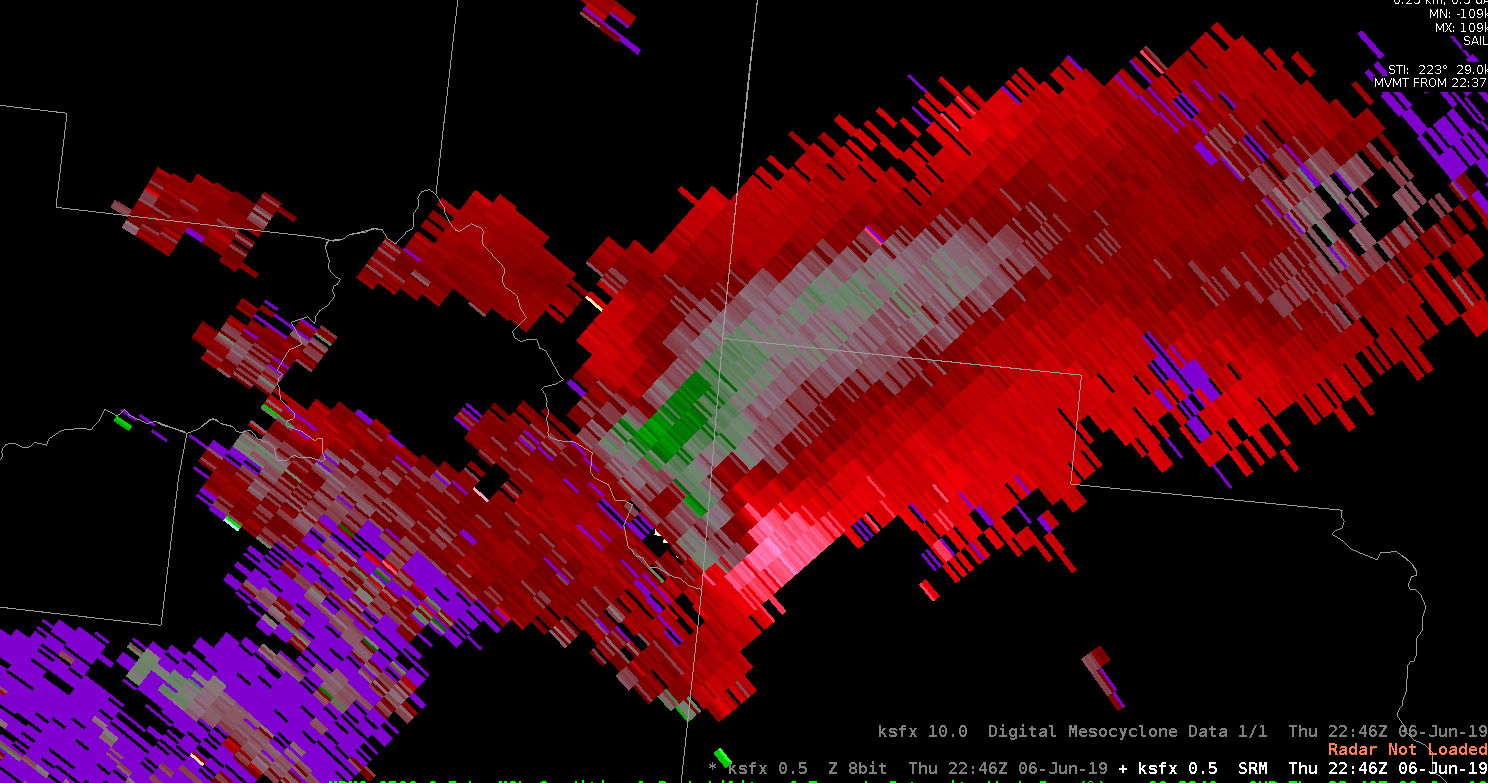 The CPTI was showing high probabilities as well.  I still wasn’t as concerned about a tornado threat due to how high the base of the storm was. It was interesting to see though. 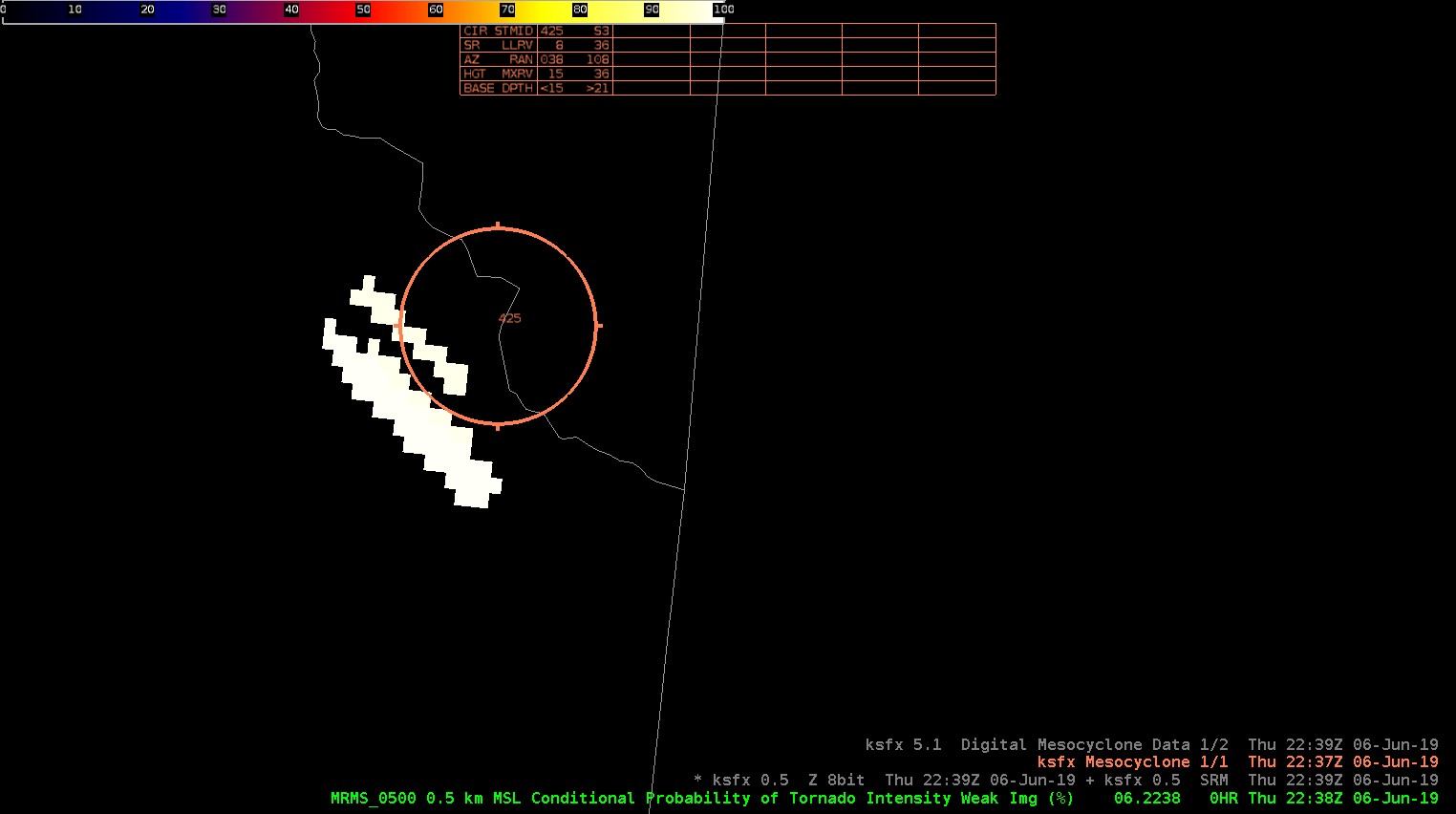 The forecast cape and cin values came in from the NUCAPS,  but it wasn’t usable for my area because their was a lot of missing data. 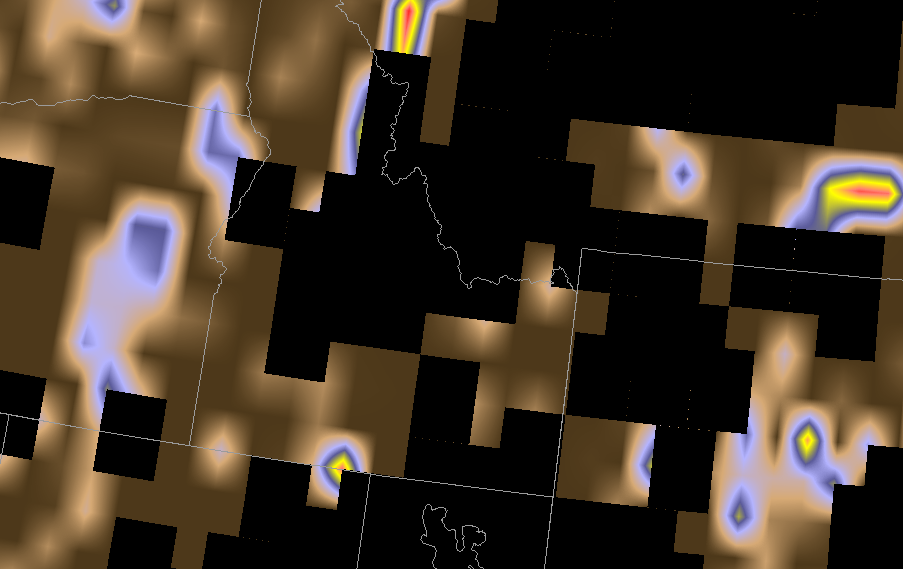 The actual Pocatella office issued a warning for Freemont county. Using typical radar methods the storm didn’t look like it warranted a severe thunderstorm warning, but satellite and MFA showed new convection was still firing up. Right after looking at satellite there was a report of a 54mph wind gusts. 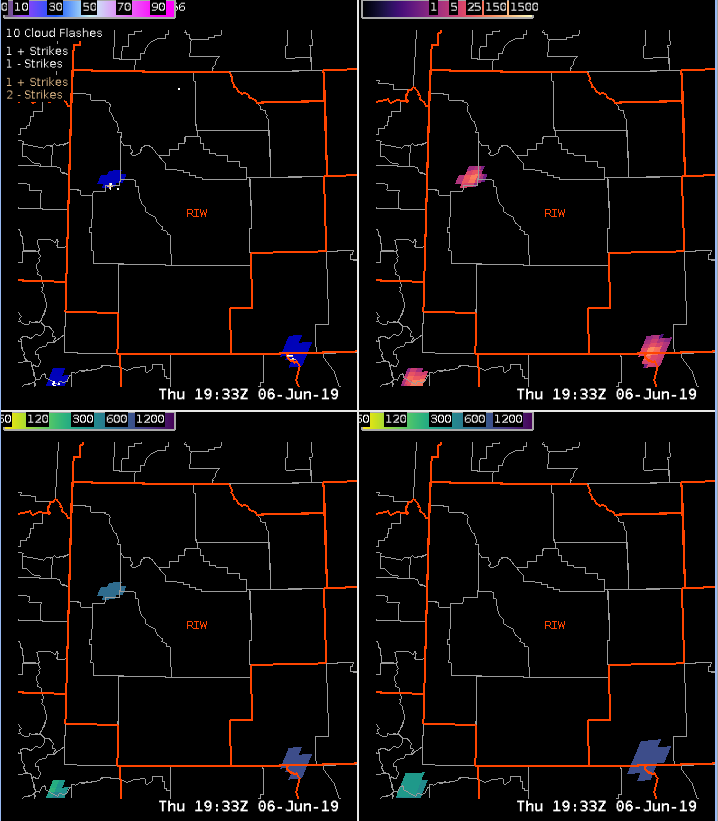 Having the different lightning products from GLM as well as data from ENTLN allows you to pick out which cells have started producing lightning.  One flash up in northern WY on this image, the dot in the upper left, did show up in the FED data a couple minutes later.