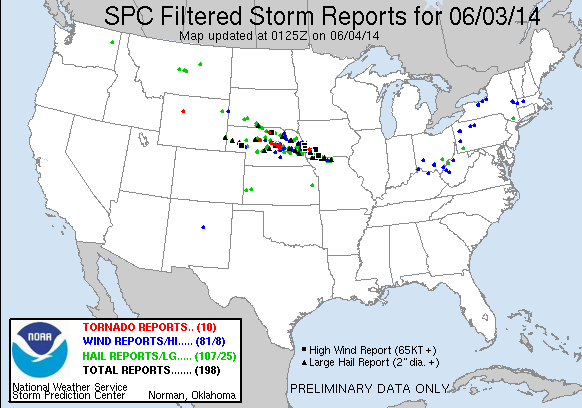 A strong short-wave trough moved through the Central Great Plains, generating severe thunderstorms in a strongly unstable and sheared environment.  During the event, we operated in two CWAs: Hastings and North Platte.  Forecasters Pelczynski and Anderson operated in Hastings; forecasters Fowle and Satterfield operated in North Platte.

When we started operations, convection had already begun in NC Nebraska, and it began to grow upscale as the sytem moved toward Omaha.  Further west, convective initiation held off for some time, before multiple storms fired along the warm front that stretched across central Nebraska.  A supercell near Ord, Nebraska became tornadic, and produced multiple tornadoes along its path just south of Omaha.

However, as the cold pool north of the warm front strengthened, it became increasingly clear that a major tornado event would not occur.  At the time of this writing, however, it appears that a significant wind event may still occur in eastern Nebraska into southern Iowa / northern Missouri (per the SPC high risk).